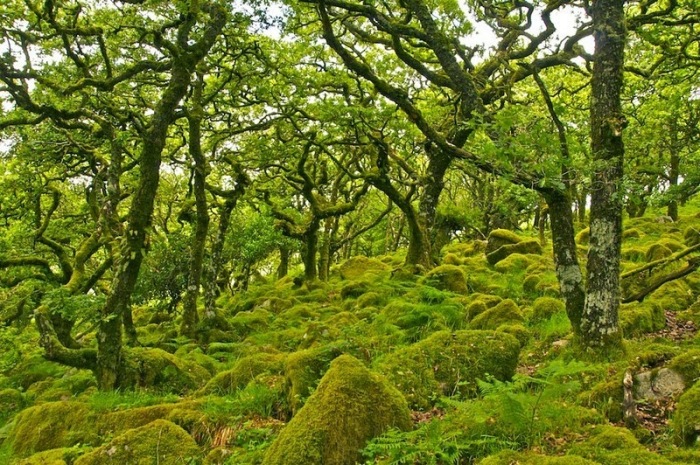 Wistman’s Wood is a small, remote, ancient woodland area on Dartmoor in England, on the slopes of the West Dart River. Covering just eight acres in area, this isolated woodland is the remnant of an ancient woodland which once covered the moor thousands of years ago, and is one of only three such high-altitude oakwoods remaining in Dartmoor.

The trees here are very old and badly stunted, possibly due to a combination of the altitude and the poor soil, with their branches twisted and knotted into fantastical shapes. The gnarled branches entwined with each other and carpeted with a thick layer of moss, accompanied by the wonderful smell of earth and age, evoke feelings of both awe and fear.

The oaks grow barely taller than 7 meters high, and their tangled branches and the uneven rocky floor make it impossible for Dartmoor ponies and cattle to enter. Its inaccessibility keeps it protected from destructive grazing, while stories of Druids, ghosts, the Devil and a host of other supernatural creatures have kept humans away for millennia. This is the main reason why the wood still exists on the moor.

Legend has it that Wistman’s Wood was a sacred grove of the Druid’s – a class of ancient Celtic people who lived during the Iron Age, and it was here that they held there pagan rituals. The wood is also said to be the kennels where the diabolical ‘Wisht Hounds’ are kept. These are a pack of fearful hell hounds who hunt across the moors at night in search of lost souls and unwary traveller’s. It is said that they are huge black dogs with blood red eyes, huge yellow fangs and an insatiable hunger for human flesh and souls. They are either led by the Devil or occasionally by the ancient spirit of Dartmoor known as ‘Old Crockern’ who lives nearby on Crockern tor.

There have been reports from travellers that on dark, misty nights the hounds can be heard howling and baying for blood. The wood is also said to be home to a variety of adders whose bites are more venomous that any other adder on Dartmoor. According to one story, an adder bit and killed a dog called Jumbo whose ghost can now be seen scurrying around the rocks and boulders in search of rabbits.

Near to the northern edge of the wood is the ancient Lych Way or ‘Way of the Dead’ along which the corpses were carried for burial at Lydford. There have been reports of a ghostly procession of monastic looking men dressed in white habits slowly walking by the oak wood in sombre silence. No wonder, many writers have described the wood as being “the most haunted place on Dartmoor”.