While most sculptures are intended to be viewed, there are some that strive to stimulate our other senses as well. These eight large scale sculptures are installed at various locations around the world, and interact with natural forces like the wind and the rain to create soothing music. Let’s hear them.

The Singing Ringing Tree in Burnley, in Lancashire, England, is 3-meter tall and comprises of galvanised steel pipes of differing lengths and with holes punctured into the underside. When the wind blows, the sculptures produces an eerie sound in several octaves. Completed in 2006, the Singing Ringing Tree is part of the series of four sculptures within the Panopticons arts and regeneration project created by the East Lancashire Environmental Arts Network (ELEAN). 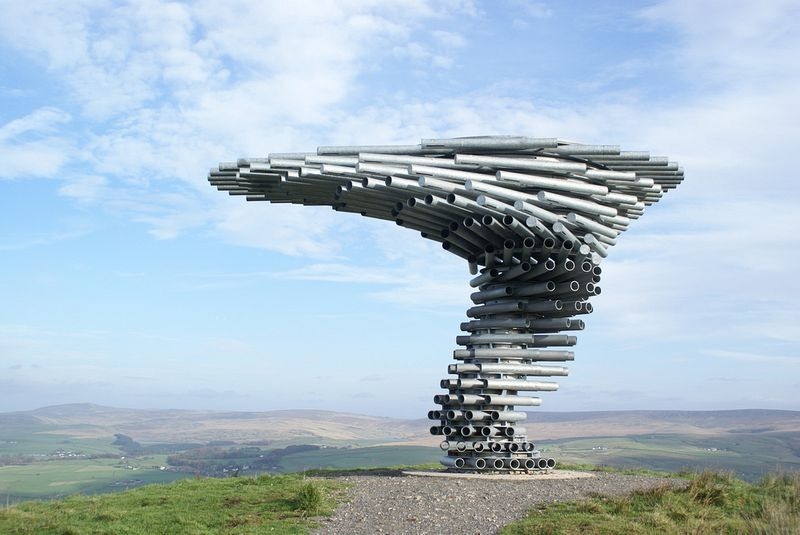 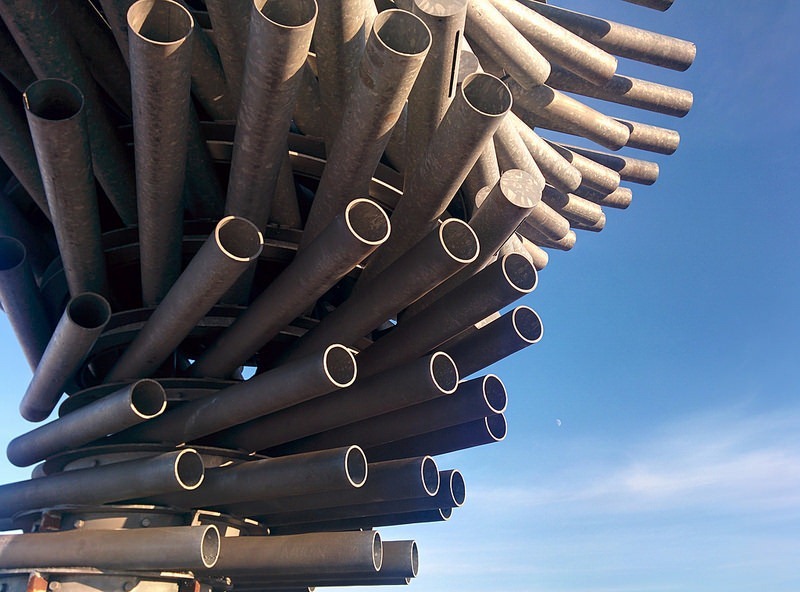 The Aeolus Wind Pavilion stands at London’s Canary Wharf and is composed of 310 stainless steel tubes that terminate in a double-curved arch which visitors can enter for a unique aural experience. Many of the tubes are connected to strings attached to a membrane on their outer end that transmits wind-generated sound into the arch and to listening posts situated nearby. The wind causes the strings to vibrate which are projected down through the tubes to the listener underneath the arch. Even on windless days, the tubes produce a hum at low frequencies.

The sculpture was made by British artist Luke Jerram. 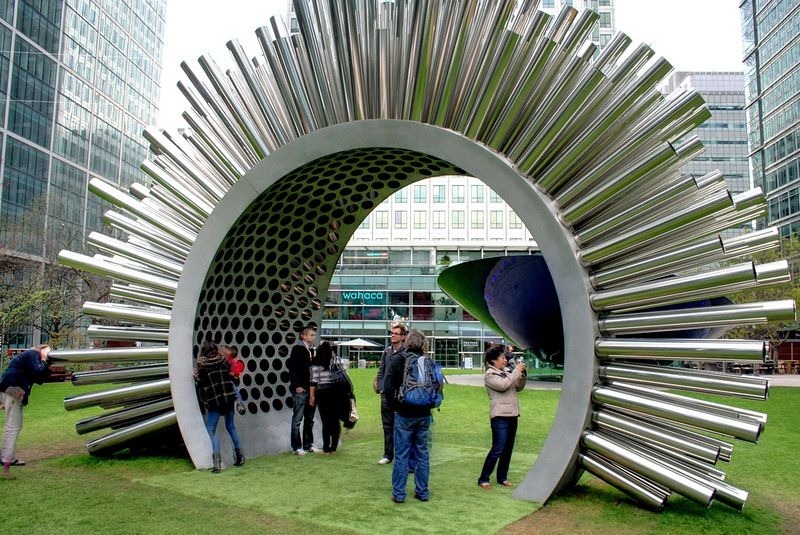 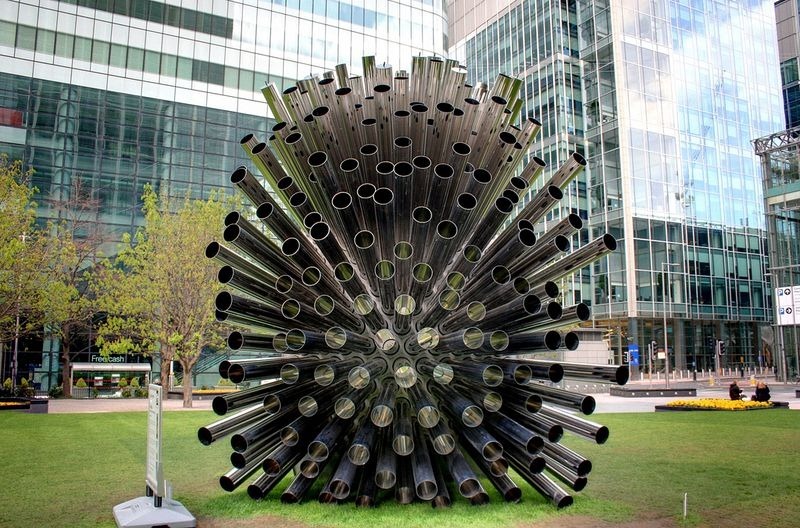 The Sound Garden lies on the campus of the National Oceanic and Atmospheric Administration (NOAA), adjacent to the Warren G. Magnuson Park in Seattle, Washington. Designed and built by sculptor Douglas Hollis during the early 1980s, the Sound Garden features 12 steel towers that look like cell-phone towers, inside of which hangs organ pipes of varying lengths that produce low tones when the wind blows around and through them. At the top of the towers, horizontal steel vanes catch the wind and rotate the pipes. However due to its poor condition one only hears tones when there is a strong breeze blowing. 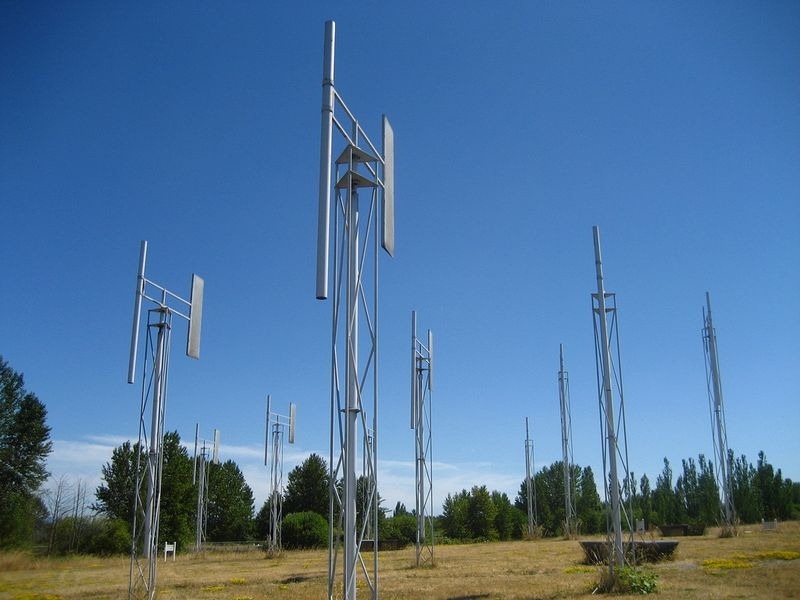 The Sea Organ in the coastal Croatian town of Zadar consist of thirty-five organ pipes hidden under the concrete steps leading to the shore line. The perpetual movement of the waves and wind pushes air in and out of the pipes to produce a variety of musical notes that can be heard changing as one moves along the promenade. The sculpture was made by the architect Nikola Bašić as part of the project to redesign the new city coast. 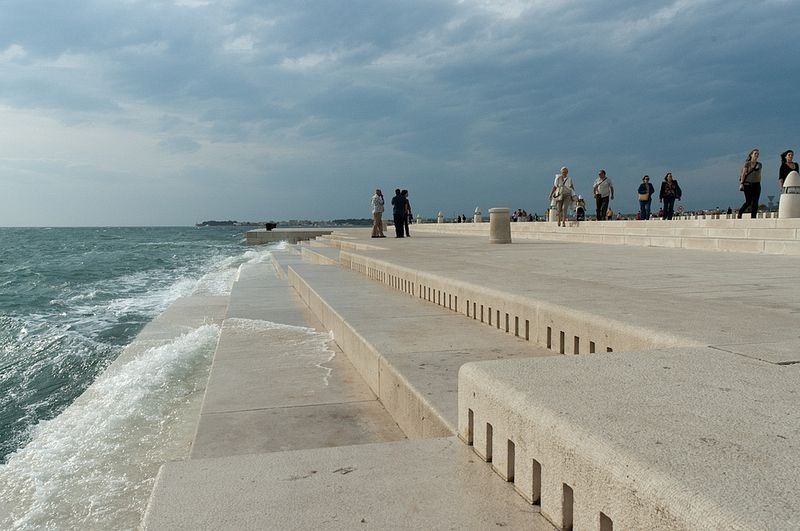 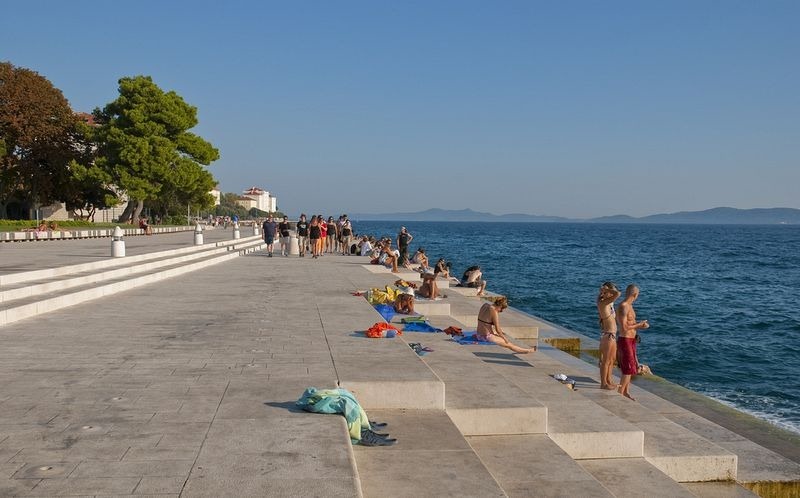 The Wave Organ is located on a jetty that forms the small Boat Harbor in the Marina district of San Francisco Bay. Designed by artist Peter Richards in collaboration with sculptor and stone mason George Gonzales, the Wave Organ consist of 25 organ pipes made of PVC and concrete located at various elevations within the site with their lower end extending to the sea below. A combination of tides and wave rising and falling pushes air in and out of the pipes to create gurgling noises. The sound heard at the site is said to be very subtle, requiring visitors to become sensitized to its music to hear it. “The trick is to arrive at high tide, sit down, and shut up,” writes RoadsideAmerica.com. 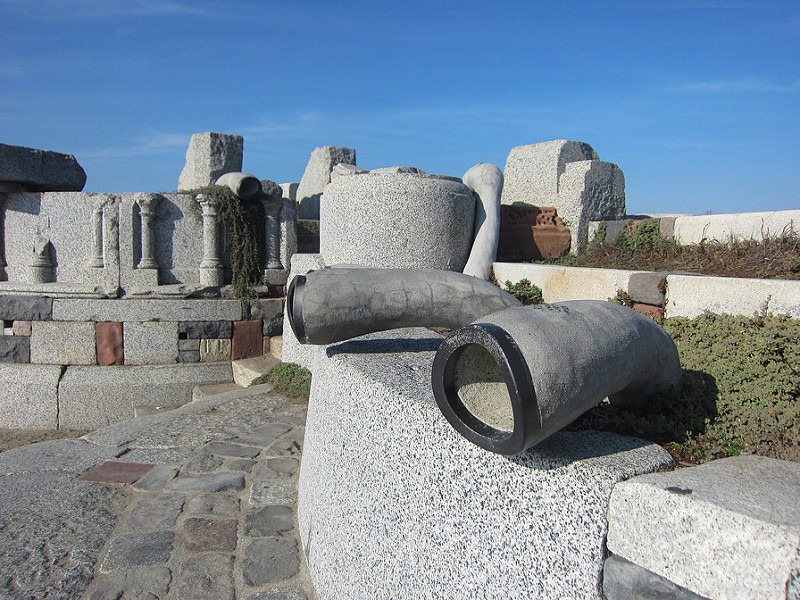 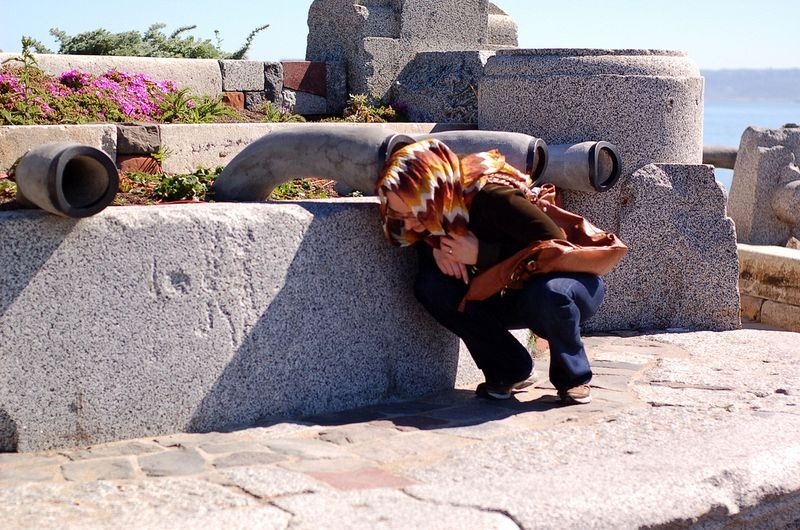 A tourist tries to listen to the Wave Organ.

The High Tide Organ is 15 meters tall and was constructed in 2002 as part of “The Great Promenade Show” series of sculptures situated along Blackpool’s New Promenade in the UK. Attached to the sea wall are eight pipes that are connected to 18 organ pipes underneath the promenade. At high tide, the swelling water pushes air up the sea-wall pipes and causes the organ pipes to sound. The best time to hear the High Tide Organ is two to three hours before or after high tide. On very calm days the organ remains is silent. The sculpture was designed by the artists Liam Curtin and John Gooding. 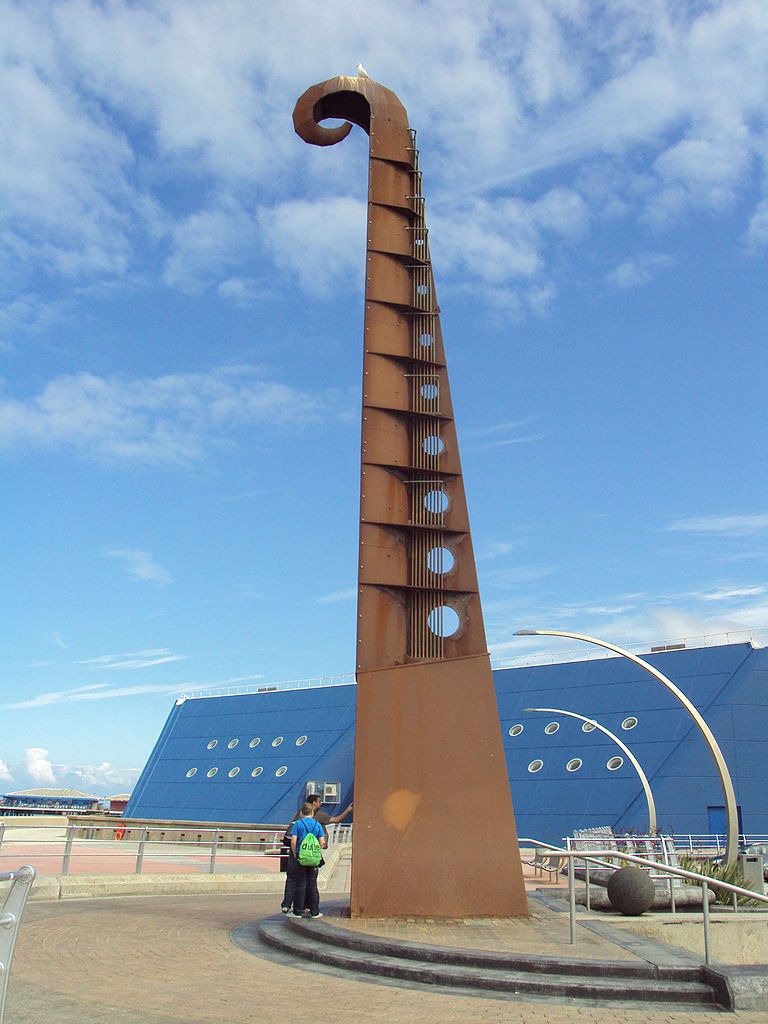 The Funnel Wall is located in the neighborhood Kunsthof passage within Dresden, Germany. On the outside wall of a large multi-story blue building are a series of metal pipes and funnels of various sizes that play music when rain water flows from the roof to the gutters below. Unfortunately, I couldn’t find even a single audio recording of the Funnel Wall in play. 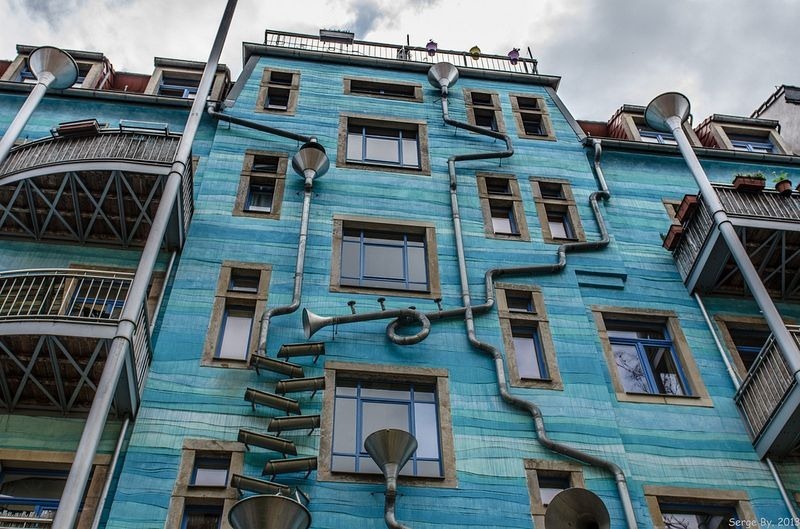 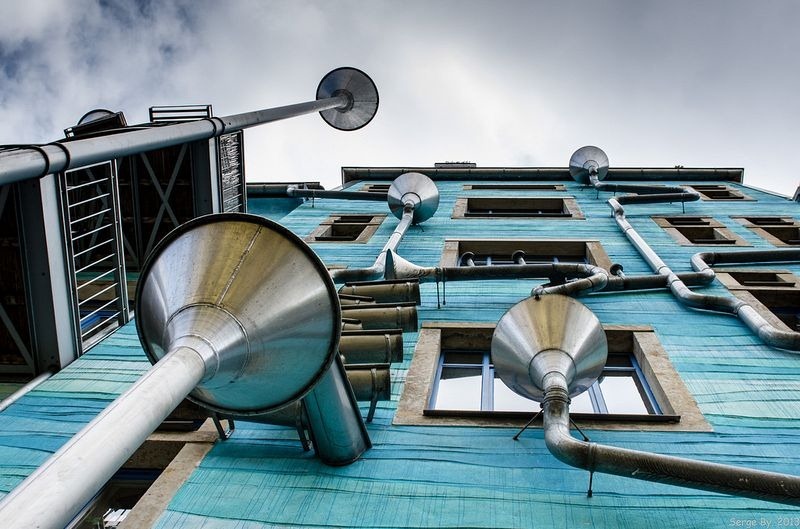 The Windorgel is another sound sculpture located in the town of Vlissingen or Flushing in The Netherland. It consist of several vertically placed bamboo tubes with holes along its length. It produces a variety of tones when the wind blows. The original wind chime was built in 1975, but lasted only a year, washed away by a storm. The second one was built shortly after the first one was destroyed. Unfortunately, the second wind organ was destroyed by vandals in 1981 resulting in the third and current wind organ to be built in 1983. 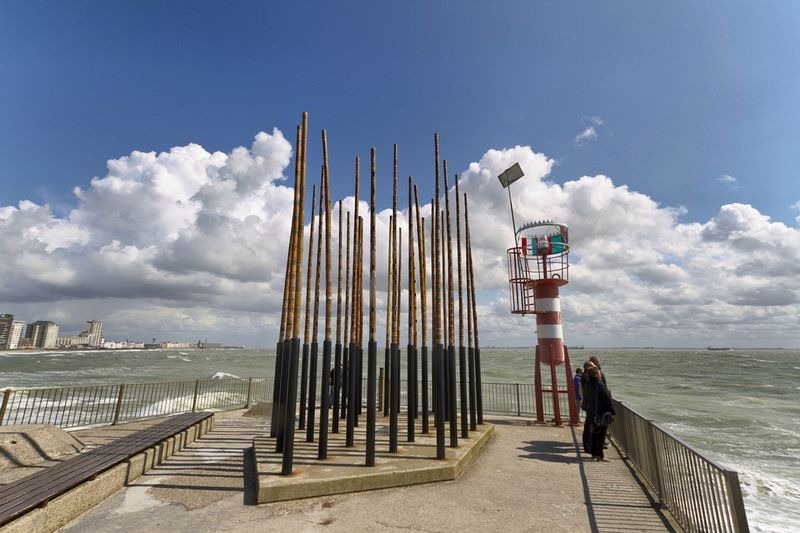 Aside from these eight sculptures there are probably dozens of smaller and lesser known sound sculptures in all corners of the world. Here are some that you might want to check out.