Khyari (10), looks down the hall to check that the front door of the house is closed, so as not to be exposed to sunlight.

Xeroderma Pigmentosum, or XP, is a genetic disorder that affects the ability of skin cells to repair the damage done by ultraviolet (UV) light. This means that UV light can easily cause burns, cancers, and other skin malignancies. In extreme cases, those suffering from XP have to avoid exposure to even the smallest amount of sunlight, and even be wary of artificial sources of UV light such as neon tubes and some energy-saving fluorescent lamps. The necessity for complete avoidance of sunlight has led to individuals with the condition being given the nickname in French of Les Enfants de la Lune(Children of the Moon). 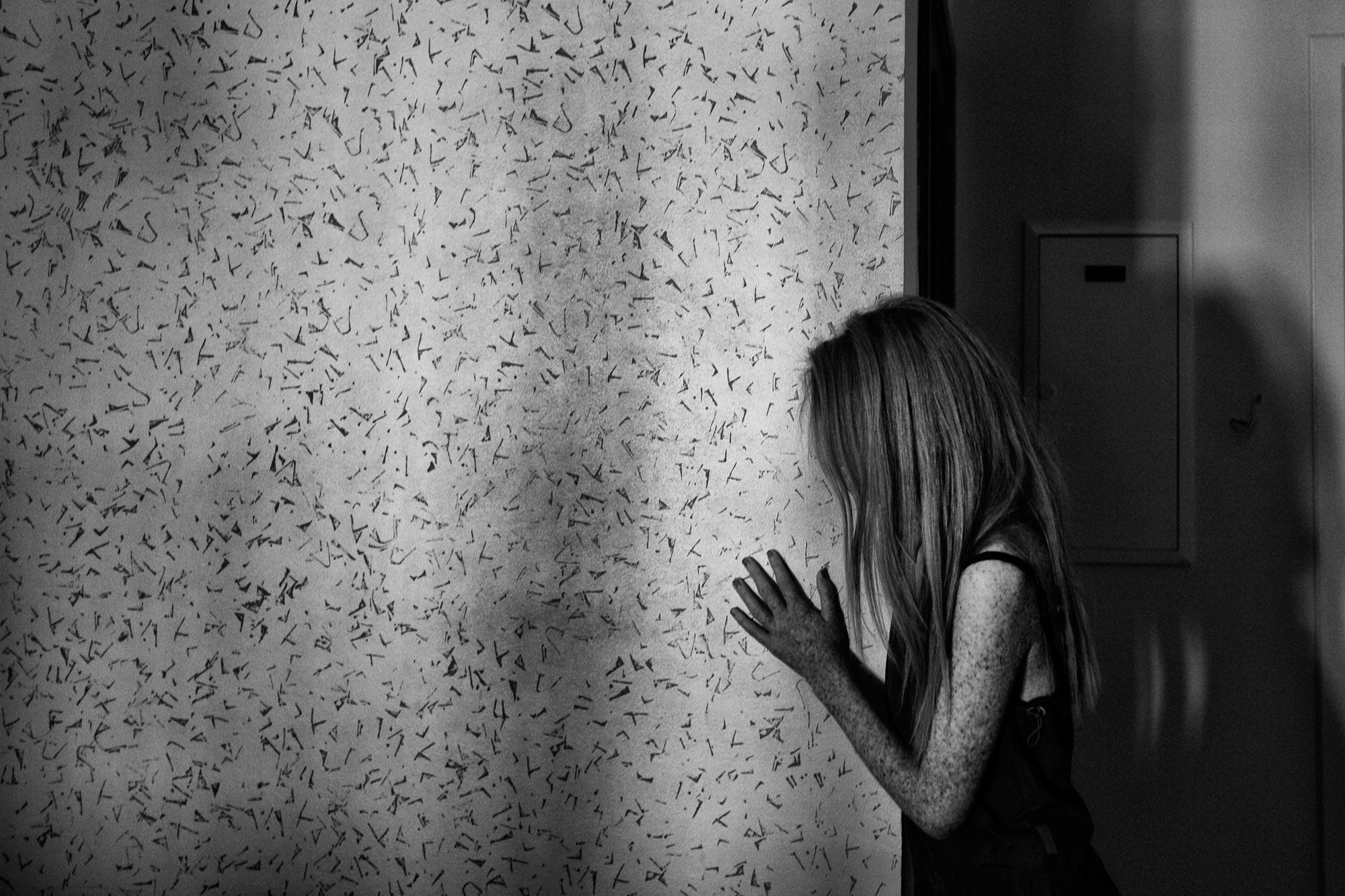 Farah (26), in her sitting room in Ariana, northern Tunisia.

Cancers caused by XP usually develop between the ages of two and ten. Without protection from the sun, a patient is 4,000 times more likely to develop skin cancer than other children. Life expectancy of those who live without protection is less than 20 years. The condition is caused by a recessive gene, which means that both parents must have the gene for XP to manifest itself in their children. A couple giving birth to one baby with XP has a 25 percent chance of having another child with the condition. 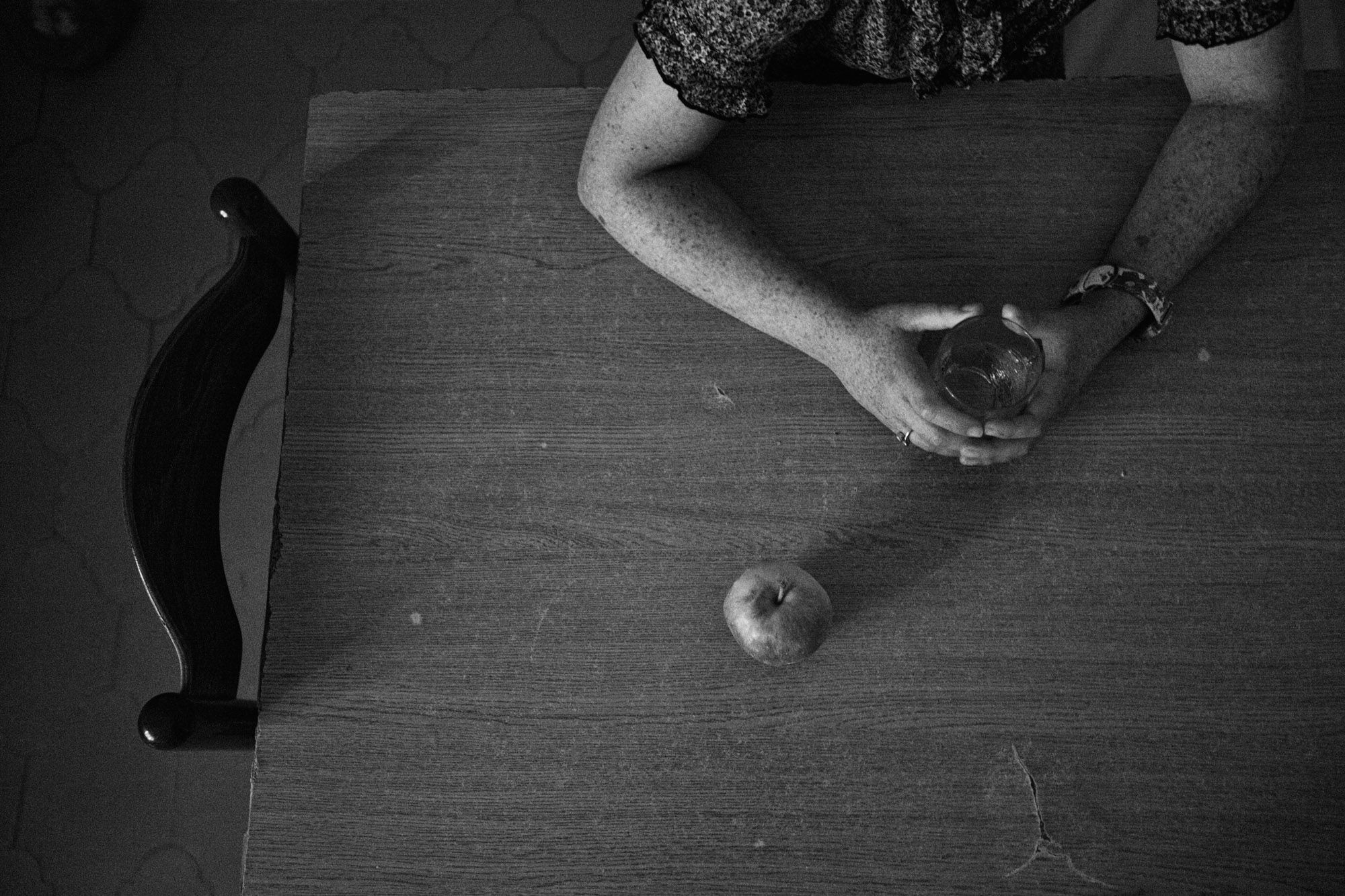 Nadia takes a break in her kitchen. She makes jewellery.

The incidence of XP in newborn babies worldwide is one in every 300,000, while in Tunisia it is one in 10,000, and in some regions of the country up to one in 100. Part of the reason for this is thought to be intermarriage between cousins, which is still traditional practice in some areas. Lack of public awareness of the condition is also a contributing factor. 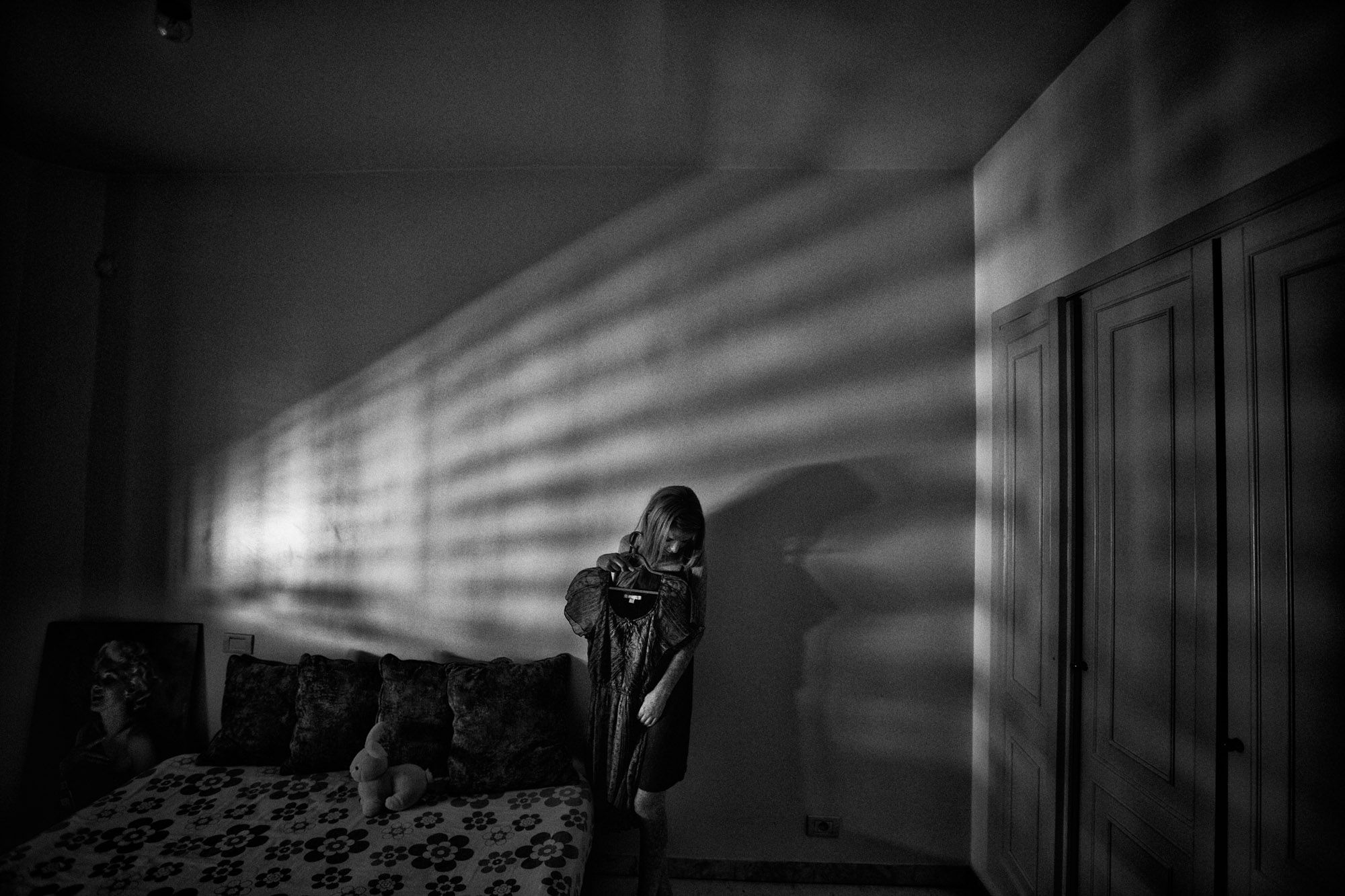 Farah (26), chooses what to wear before going out for a coffee at the end of the day.

The revolution shone a light on Tunisia and brought much out into the open but for people with XP, the sun will always keep them inside. The sun brings happiness, and sunlight helps us to believe in better days. Unfortunately, the sun rejects some people. Unlike the rest of us, they don’t know how glorious a ray of sunlight can feel. XP can have a devastating effect on young lives. Even simple things going to school, playing outside, and meeting friends can be a struggle. In Tunisia, where houses traditionally have open patios, this can present problems even at home. 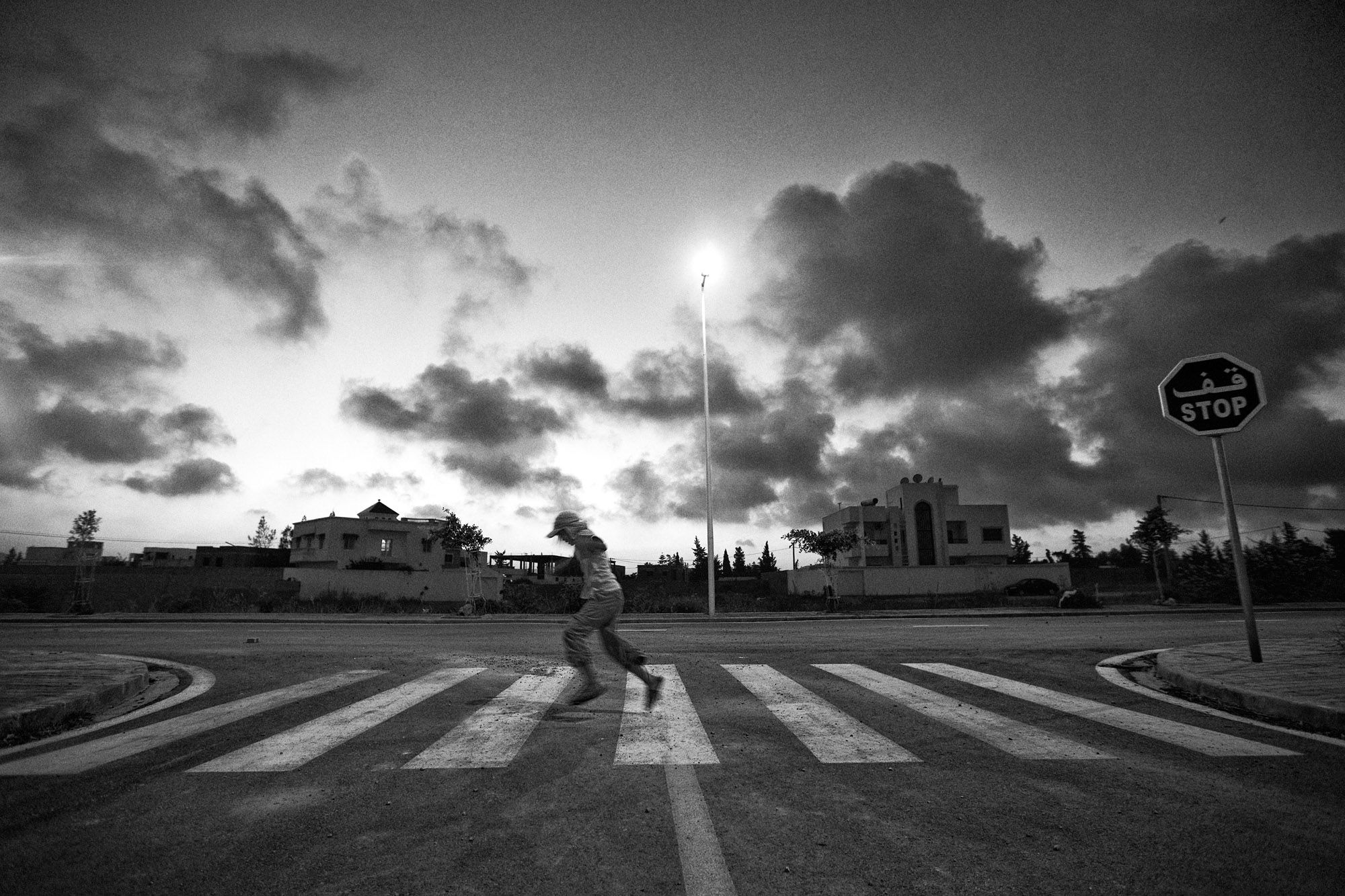 Amani (10), can only go out to play in the street after the sun has set.

The incidence of XP in Tunisia is very high. Children from poorer families are the most affected, as less-educated parents fail to understand the condition, or the preventative measures that must be taken early diagnosis and avoidance of the sun is essential. Often, married couples who have a child with XP see it as fate, or the will of God, and do not realize that they have a high chance of giving birth to more children with the condition. Despite the prevalence of XP in Tunisia, awareness even among some doctors is not widespread. State help for people with XP is minimal, though shortly before the 2010/2011 revolution, an NGO was founded to raise awareness of XP and help people with the condition to gain better access to medical attention. 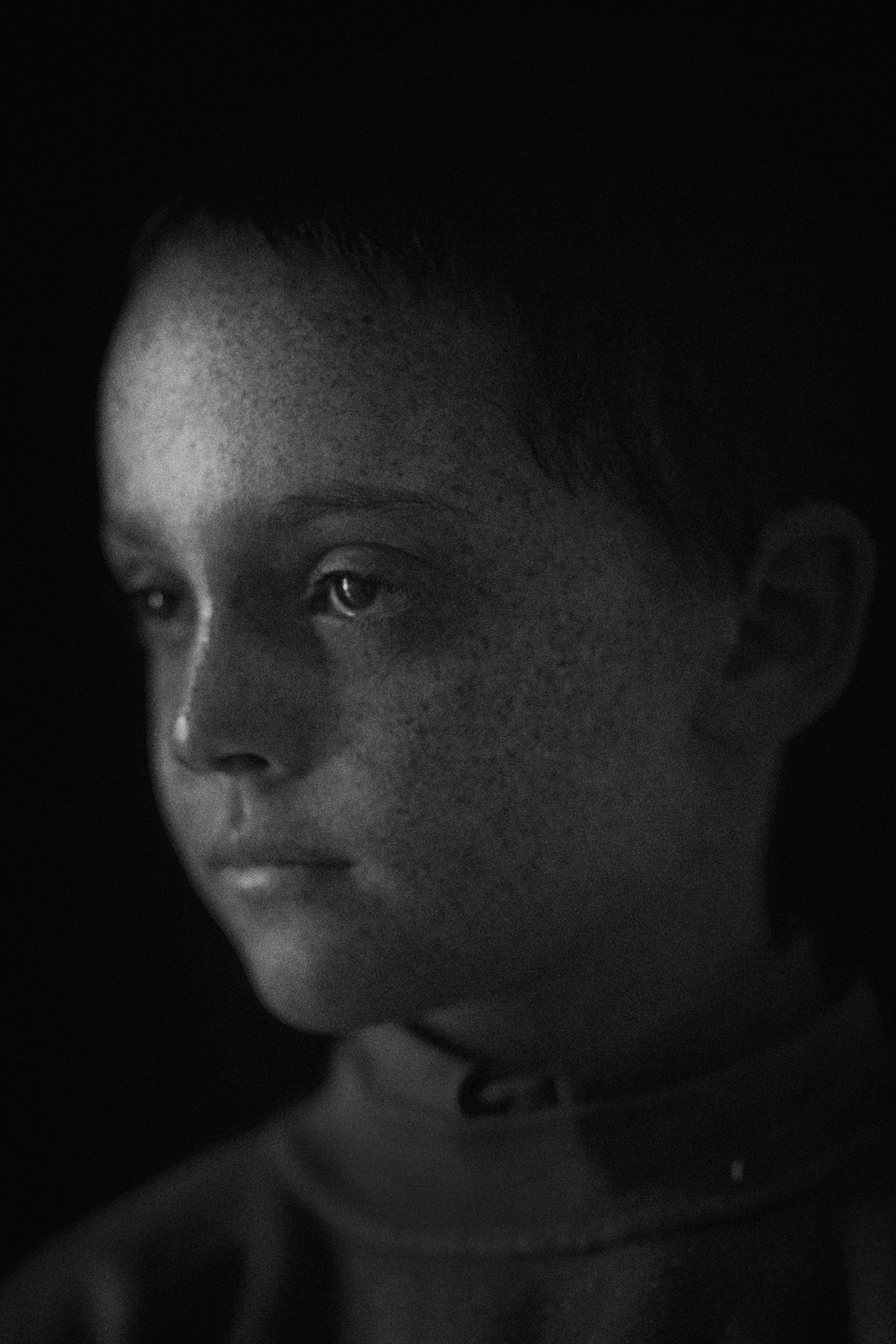 Amanallah (7), is affected by XP, but still attends school. 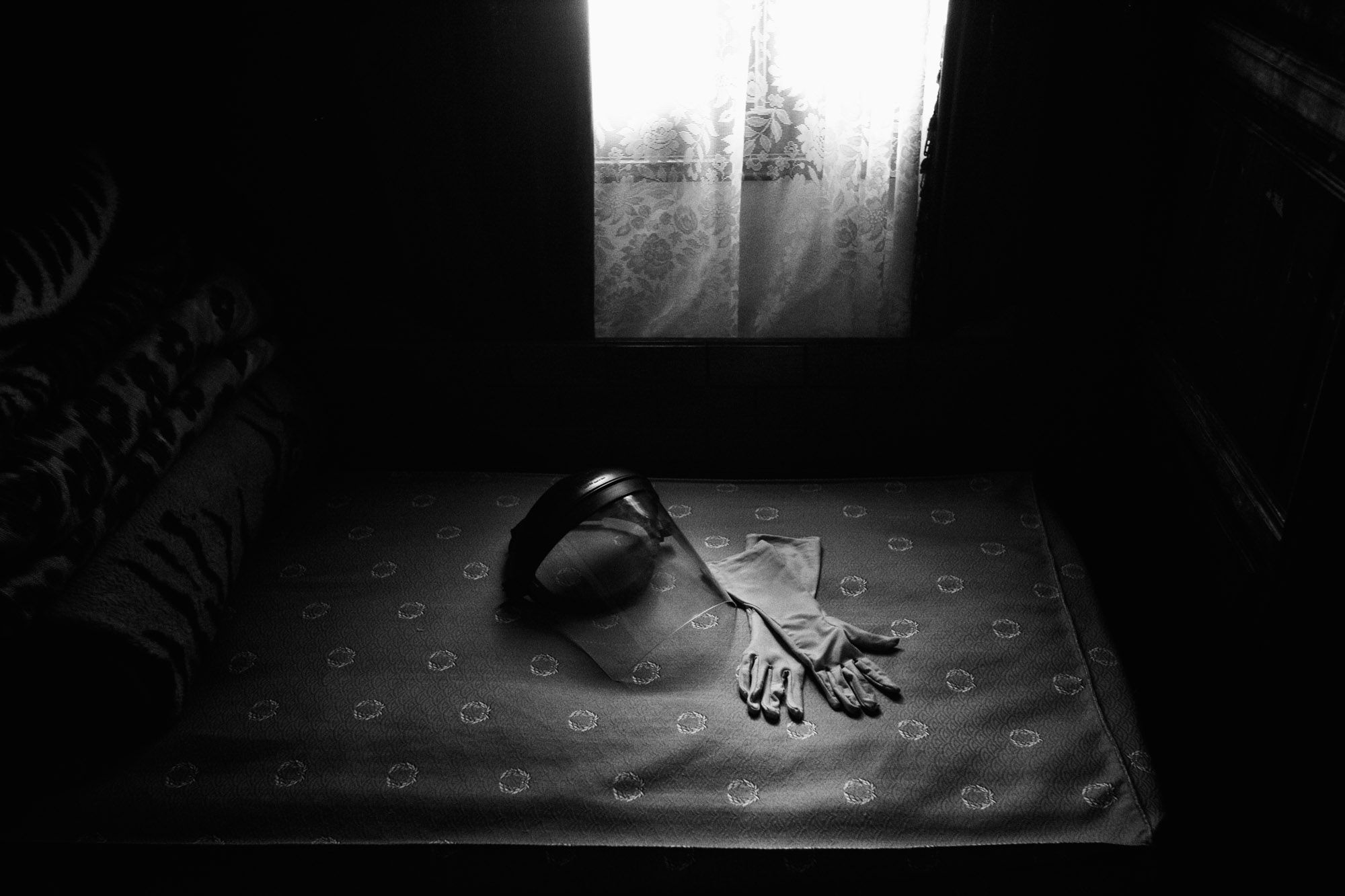 Gloves and a mask worn by people affected by XP, for protection against UV rays. 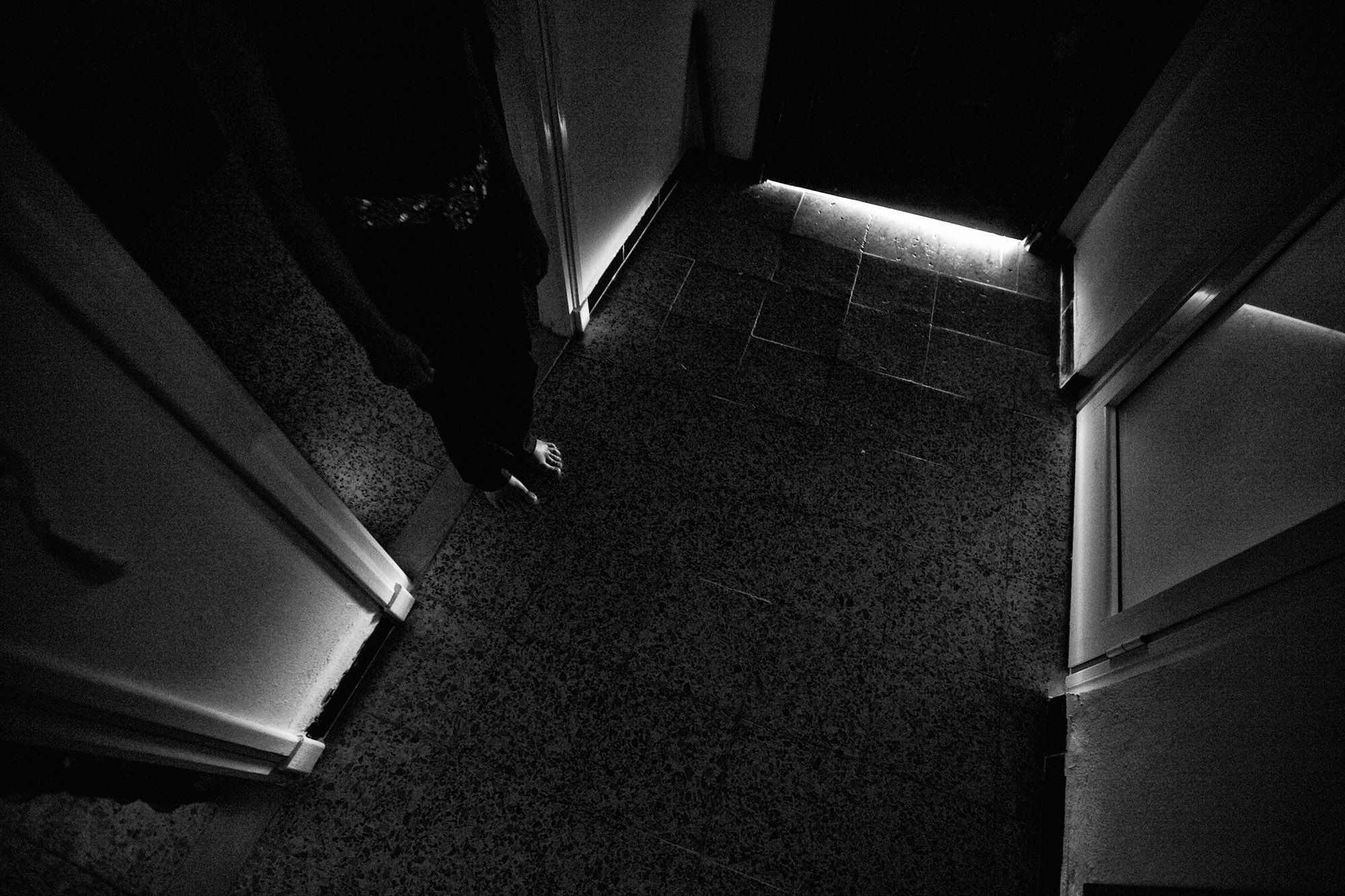 Dhikra (26), stands in the hallway of the house where she lives in Ariana, northern Tunisia. All the windows and doors are closed against the sun. Dhikra is seriously affected by XP. She can neither read nor write, as she left school at a young age, suffering from tumors. 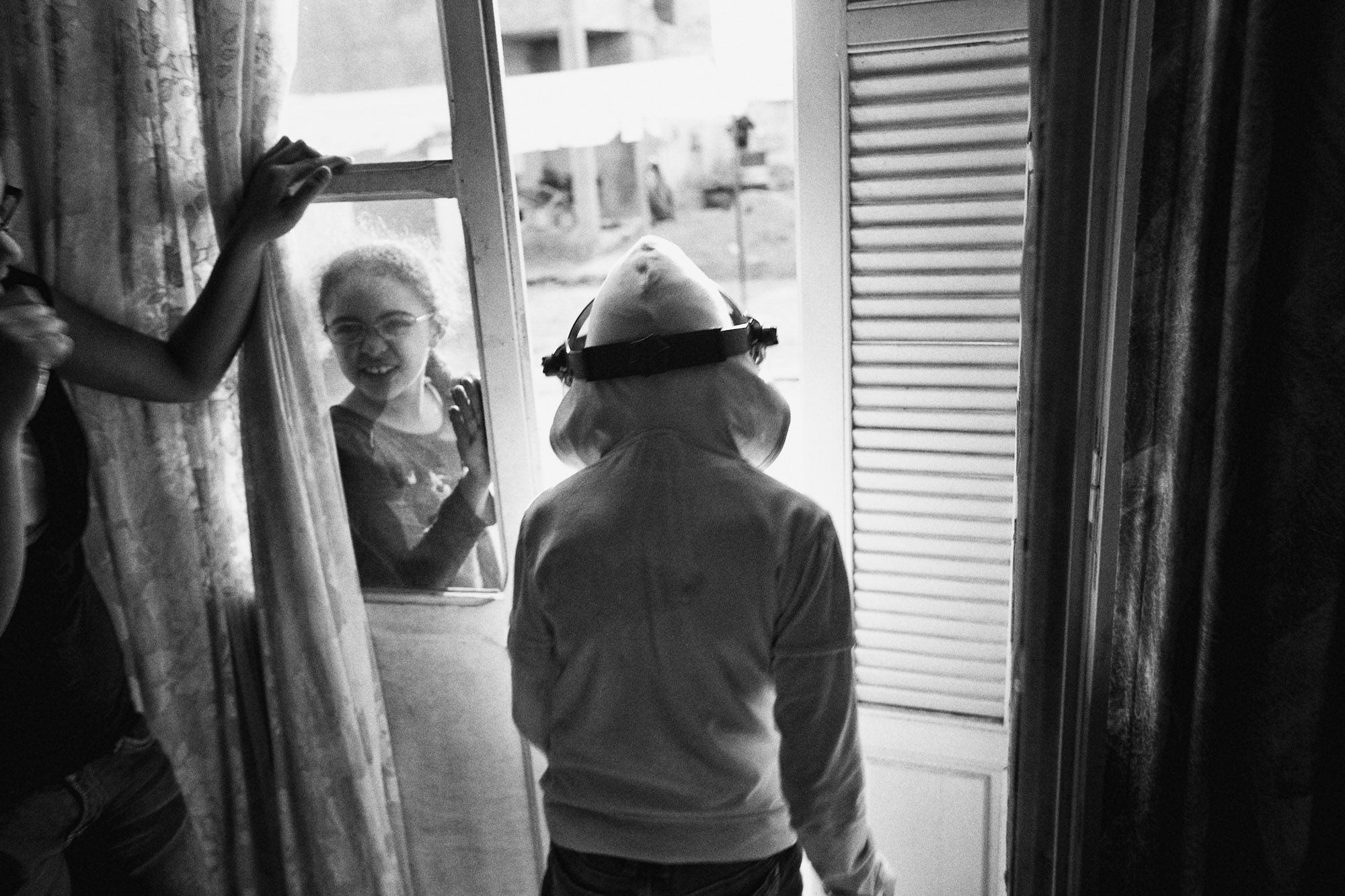 Protected against UV rays by a special mask, Amani can go out and play with her sisters in broad daylight. 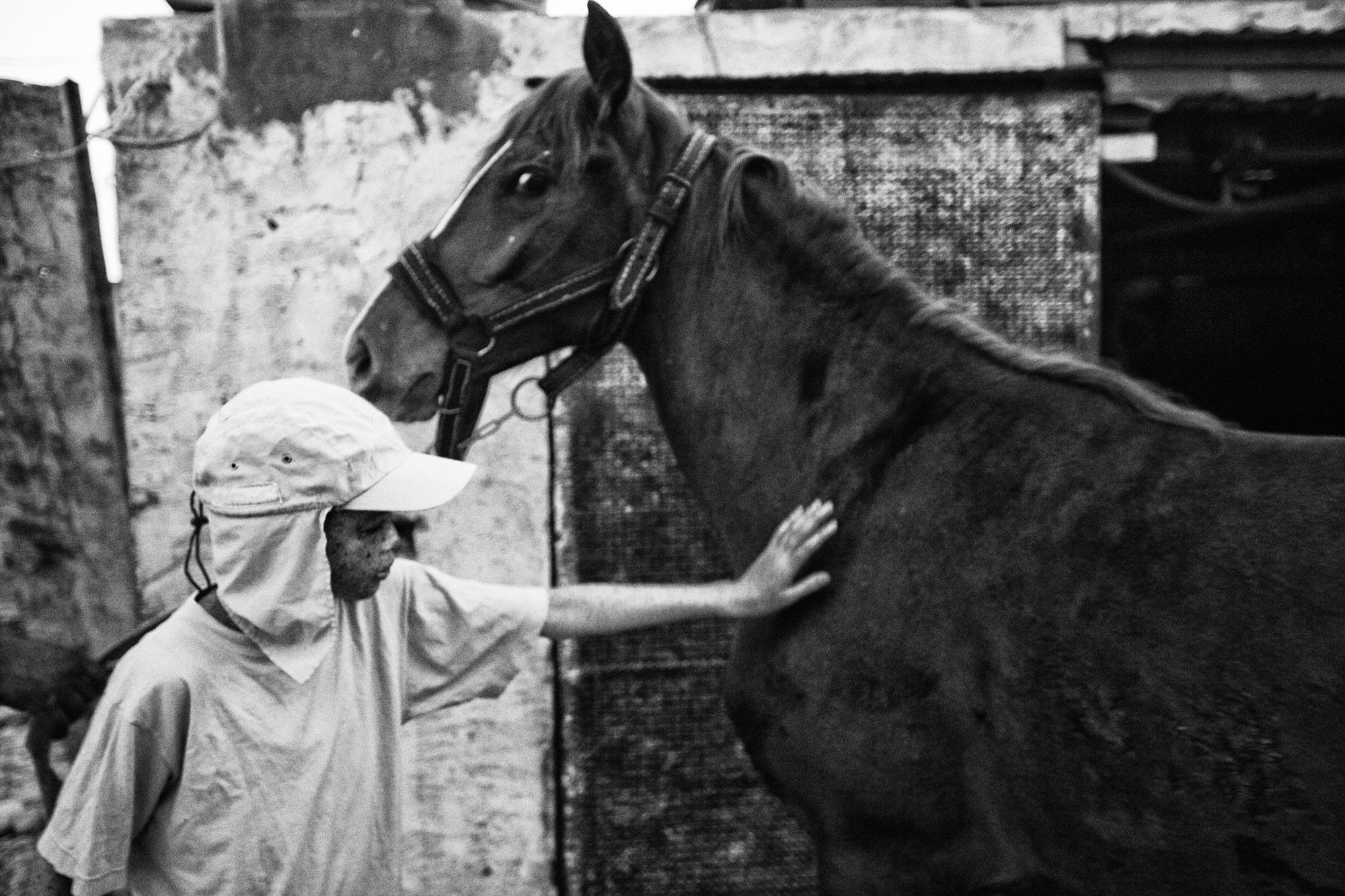 Amani (10), strokes her horse Khmisa in the courtyard of her house. She has a special relationship with her horses. 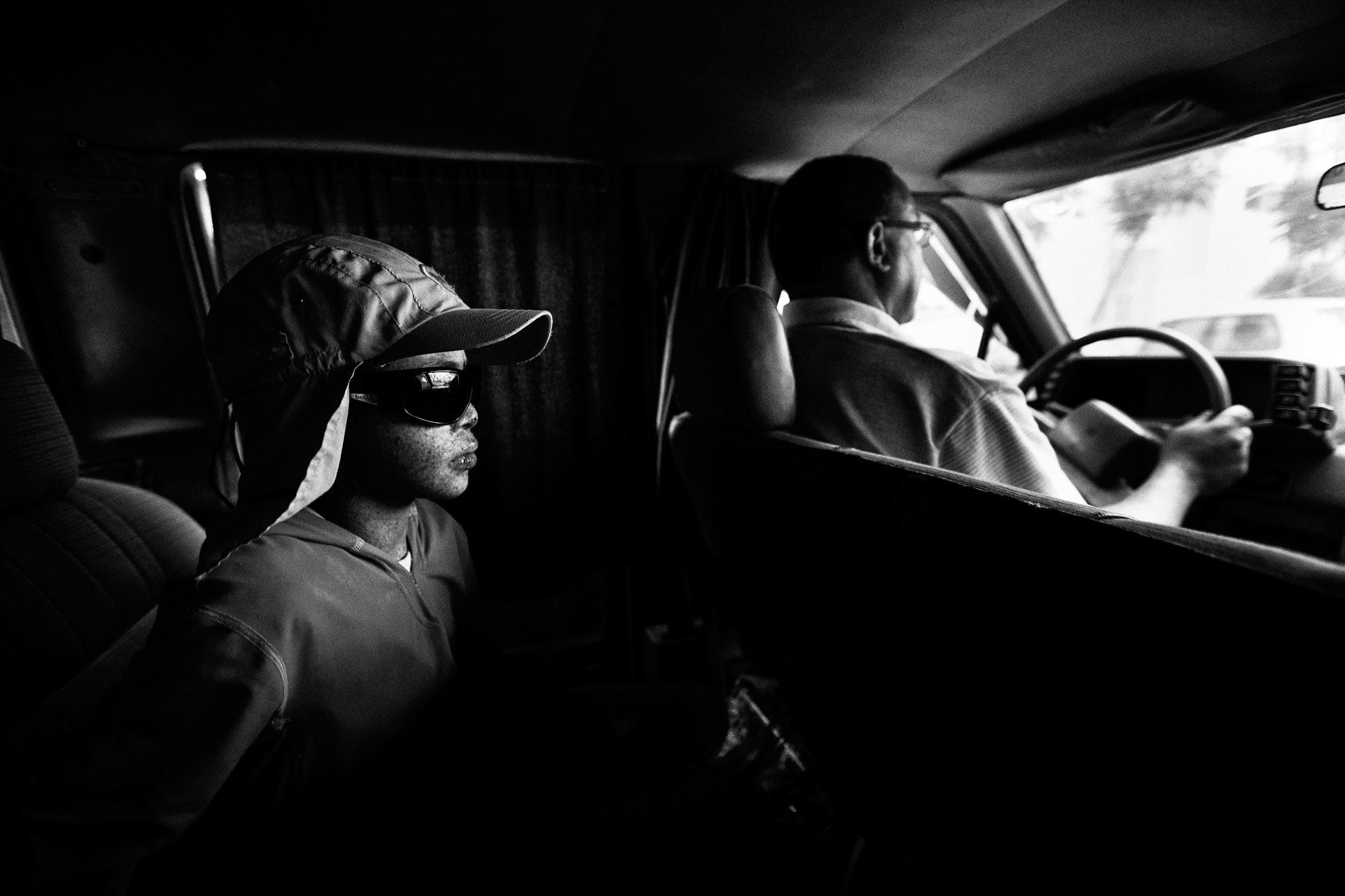 Amani (10), rides back from a visit to hospital in a blacked-out car and protected by sunglasses. 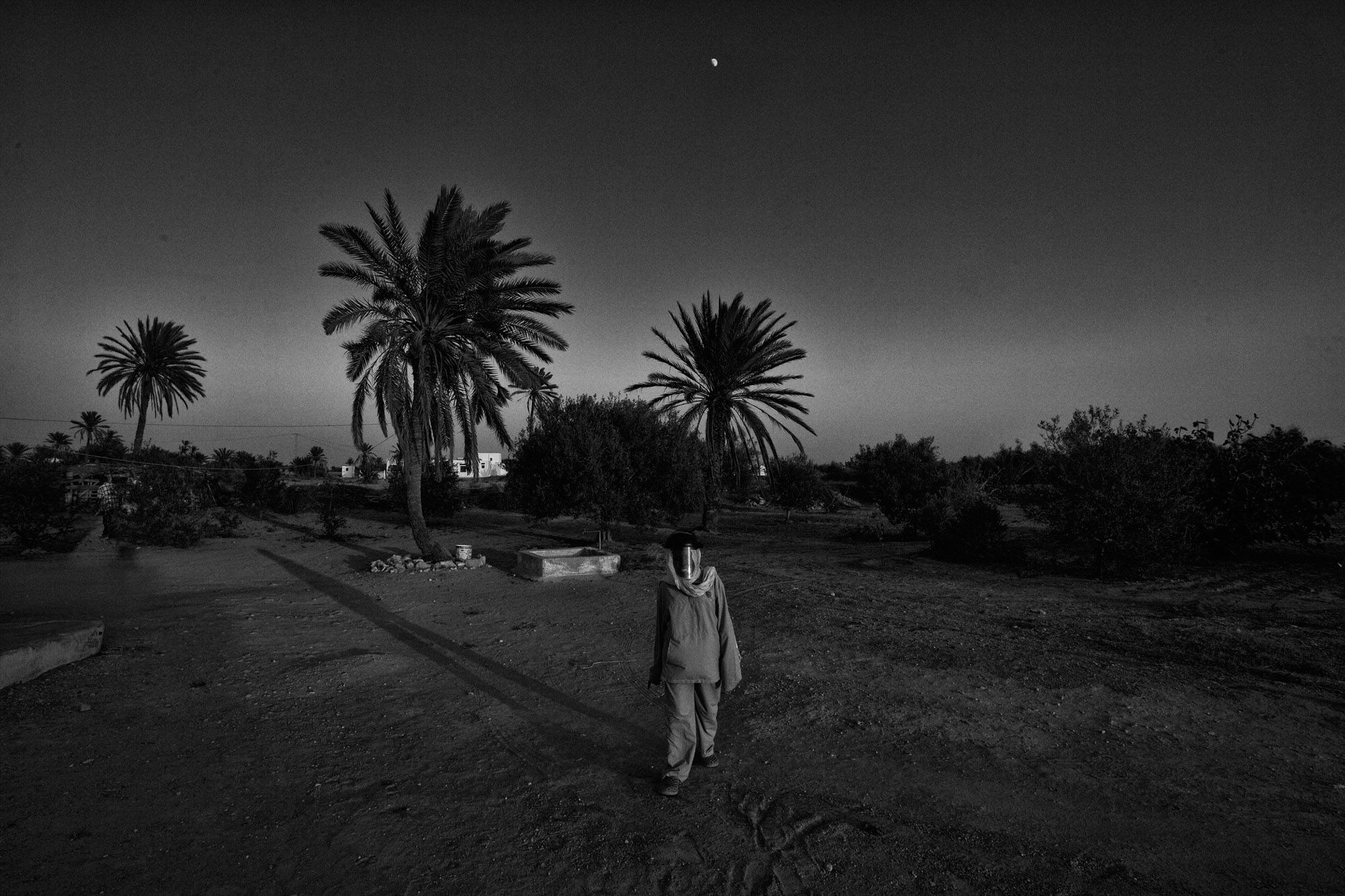 Manel goes out wearing her protective mask. Manel makes scarves, but she stopped going to the support center for the disabled because of her condition. 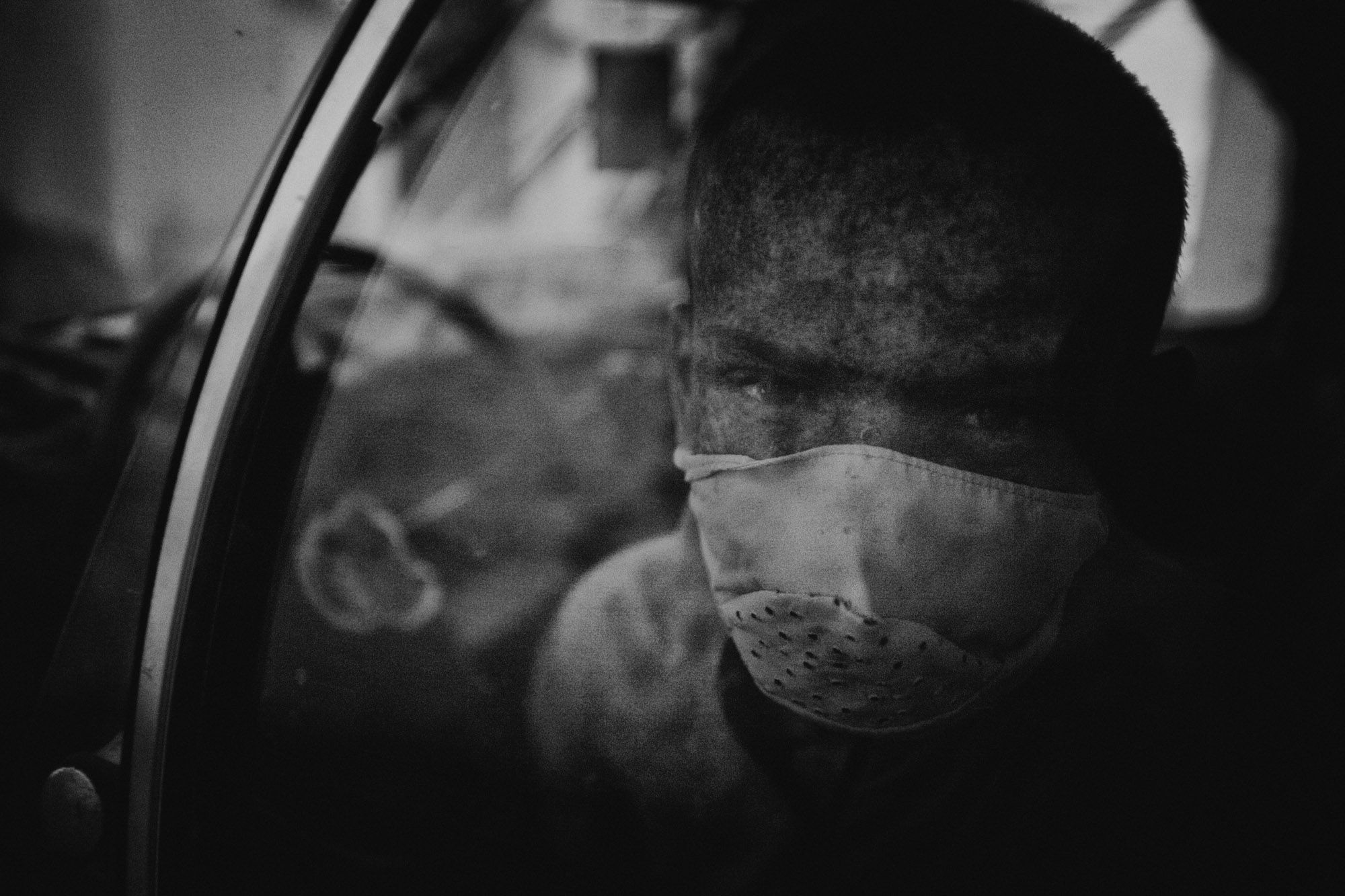 Yacin wears a mask over the lower part of his face, while waiting for his father in the car. Yacin no longer goes to school because of his condition.

3 thoughts on “Children of The Moon”