The best time to visit Italy, if you want to catch the incredible Infiorata festival, is during May and June. At this time of the year, especially on the occasion of Corpus Domini, many Italian towns decorate their streets with flower petals creating beautiful artworks ranging from simple geometric designs to elaborate tapestries inspired by religious art and famous paintings.

To create the flower carpets, the design is first sketched in chalk on the pavement, and then filled in with thousands of petals of various colors. Sometimes soil is used to highlight the outline of the design. At other times, wood carvings is used along with flowers. The entire process takes two or three days to complete. Often a religious procession takes place on the flower carpets after there are completed.

Although the practice of honoring divinities and illustrious personages, such as emperors and warriors, by throwing flowers or creating flower compositions is ancient and dateless, the art of creating flower mosaics on the streets is believed to have started in Rome in 1625, when Benedetto Drei and his son Peter, used flower petals to decorate the Vatican Basilica on the day of Saints Peter and Paul’s feast, the patron saints of Rome.

Later, baroque artist and architect Gian Lorenzo Bernini (1598-1680) spread this flower art throughout Rome, using it for the baroque festivals he organized. The custom disappeared out of Rome in the seventeenth century, but the Castelli Romani townspeople continued to keep the traditions alive. in 1778, this tradition became part of the Christian celebration of Corpus Domini in the town of Genzano where a brightly colored flower carpet was laid down in the center of a long street. Eventually, various towns of Italy began celebrating Corpus Domini by creating flower carpets.

Some of the best towns to see the infiorata festival today are Noto, Spello, Genzano, Bolsena, Brugnato, Orvieto, and the Abbey of Chiaravalle della Colomba, near Fidenza. 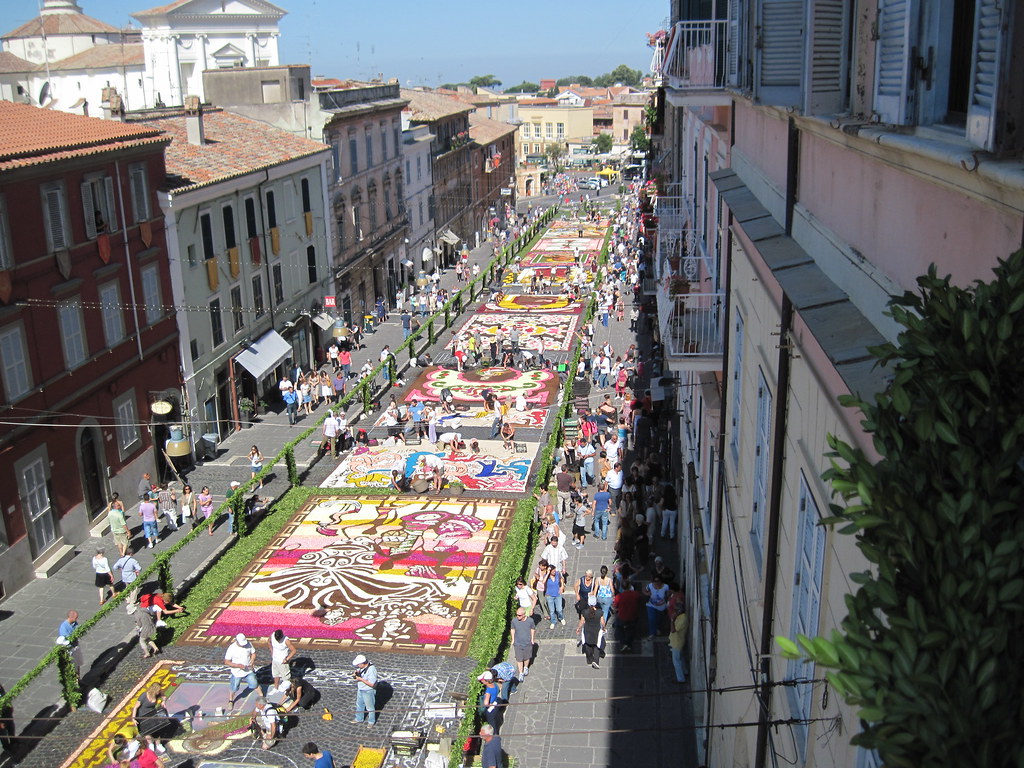