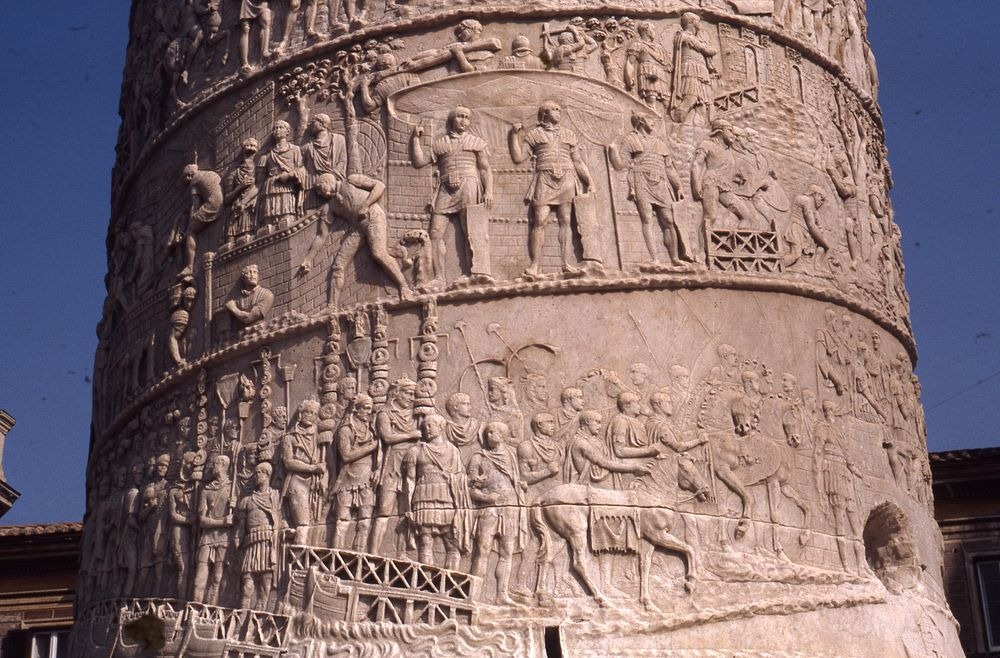 In the beginning of the 2nd century, the Roman Emperor Trajan led two very successful war campaigns against the powerful Dacia kingdom by the river Danube in what is now Romania. The Dacians were a constant threat to the Roman Empire since the days of Caesar. Two decades earlier, after a savage pillaging of a Roman settlement and the humiliating defeat of Trajan’s predecessor, the Romans tried peace negotiation with the Dacians. When that failed the new Emperor Trajan led tens of thousands of Roman troops across the Danube River over a massive bridge that was constructed for the invasion, and defeated the barbaric empire on its home turf twice.

The victory over Dacia was the defining event of Trajan’s 19-year rule. The conquest brought back a staggering amount of loot in the form of gold that helped finance Rome’s further expansion campaign. By the time Trajan died, the Roman empire attained its maximum territorial extent in history.

To commemorate the victory, the Roman Senate erected a towering Trajan’s Column in Rome, depicting in stone carved bas-reliefs the Dacian Wars’ most important moments. The bas-reliefs are strung together in a 200-meter-long band that spirals from the bottom of the Column to the top forming a continuous narrative of the emperor’s two campaigns in Dacia. The Column was originally crowned by a bronze statue of Trajan himself, but was replaced by a statue of St. Peter in 1588. The Column stood at the center of a spacious plaza known as Trajan’s Forum surrounded by galleries from which one could view at various levels the spiral band. The Forum and the Column were completed in 113 AD. 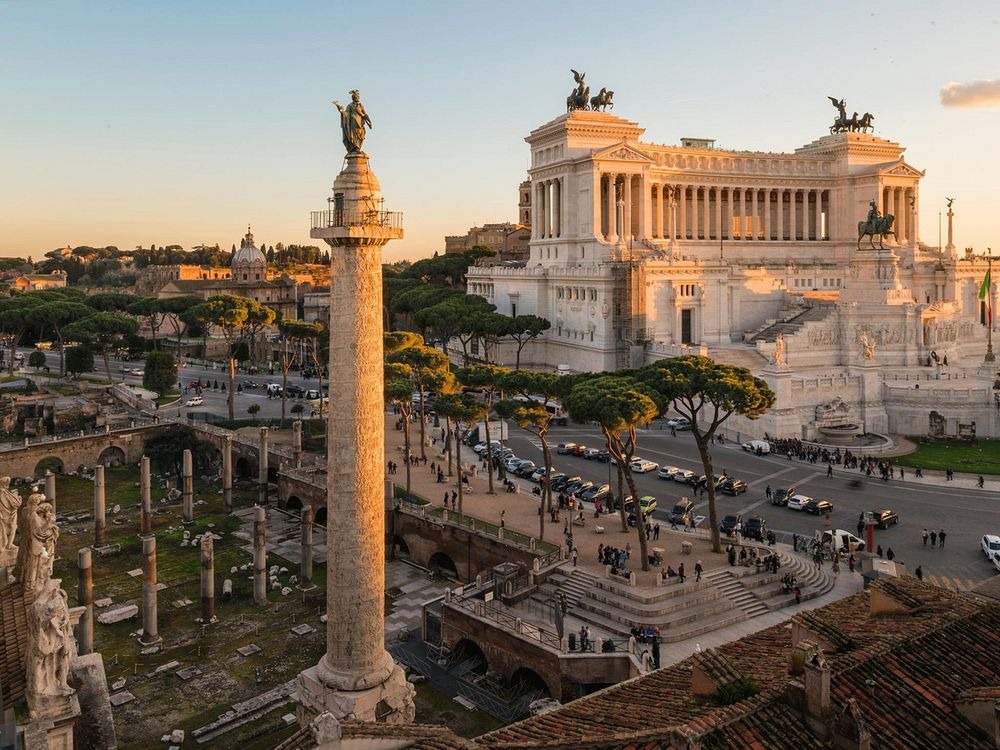 The continuous spiraling frieze winds twenty-three times from the base to the capital, and contains over 2,500 figures in 155 scenes, with Trajan himself appearing nearly sixty times in various roles such as leading the army, judging prisoners, and holding councils of war. Surprisingly, there are very few scenes of actual battle. Instead, there are large number of scenes showing construction and ceremonies conducted by the soldiers, and figures of forts, ships, weapons, soldiers, etc. Depiction of violence against the enemy is also rare, but there is a bizarre scene showing Dacian women torturing Roman men. 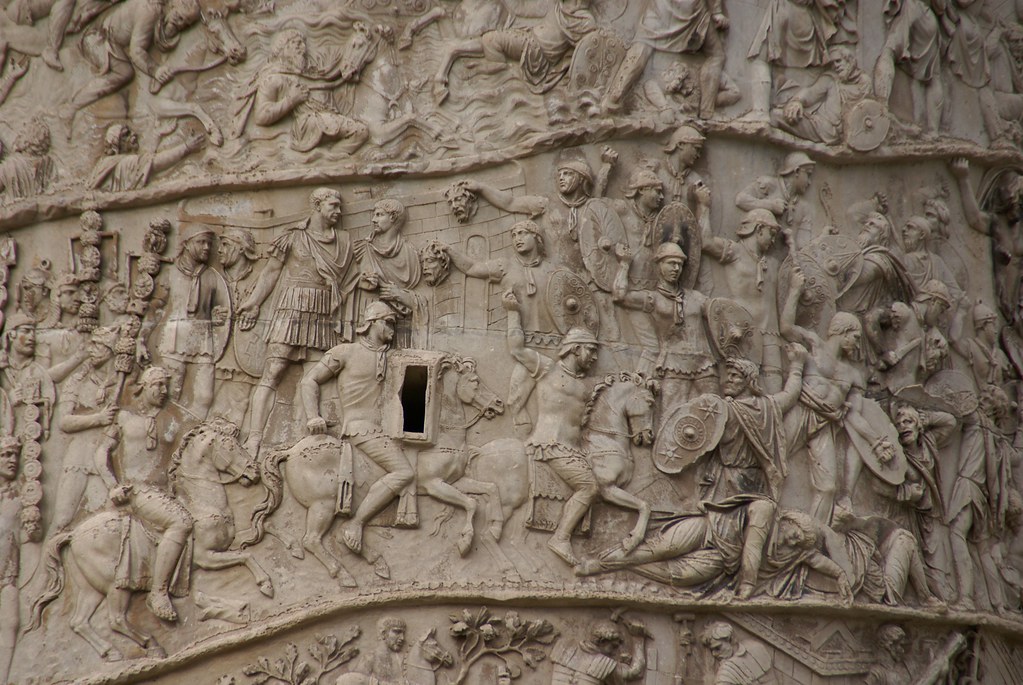 “Some scholars suggest the lack of battle scenes and large number of building scenes is a propaganda constructed specifically for the urban population of Rome (the primary audience), addressing their fear and distrust of the army by depicting its warfare as one with little collateral damage,” reads the Wikipedia article on the Column.

Some of the key scenes portrayed in the narrative include the first crossing of the Danube by the Roman legion, Trajan’s voyage up the Danube, the surrender of the Dacians at the close of the first war, the great sacrifice by the Danube bridge during the second war, the assault on the Dacian capital and the death of the Dacian king Decebalus. 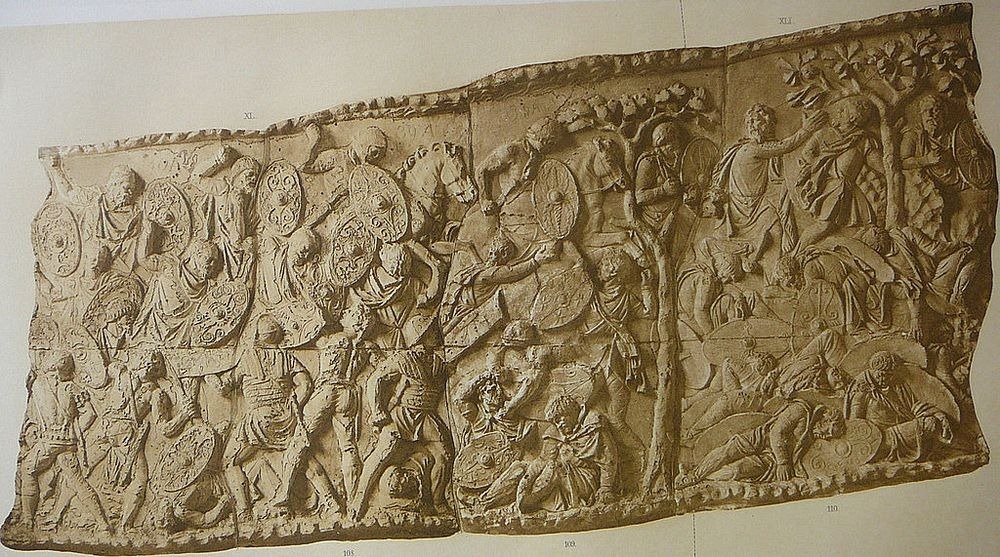 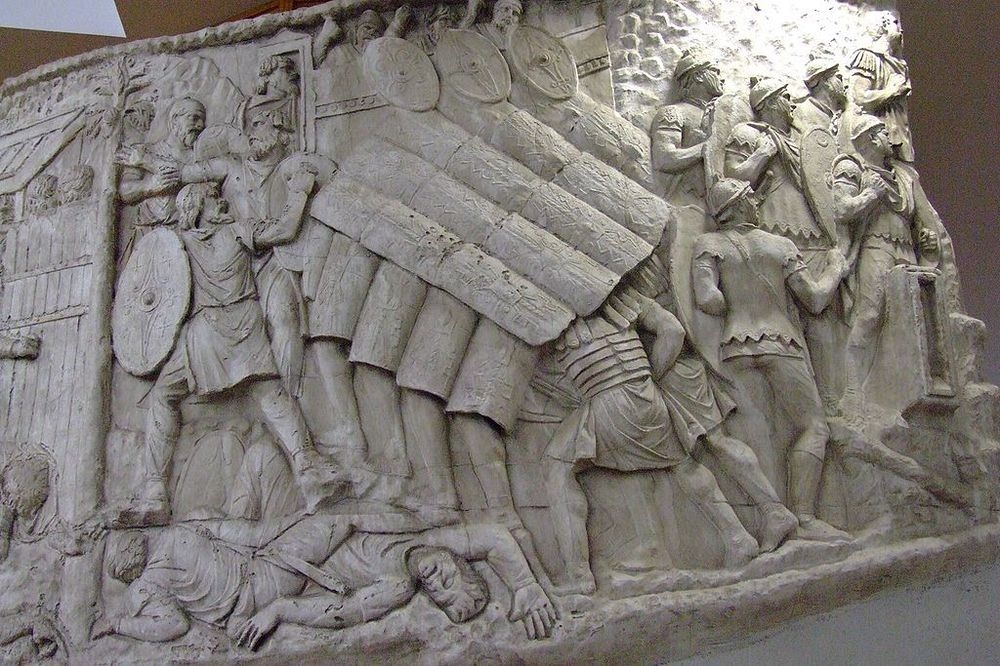 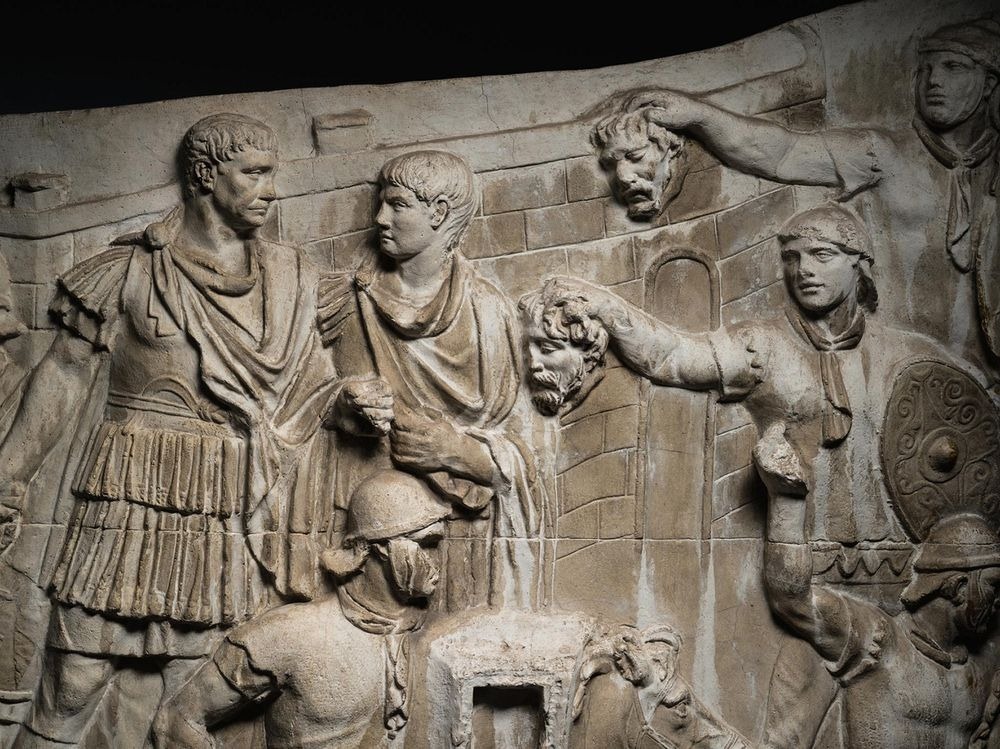 In this scene from a plaster and marble-dust cast made between 1939 and 1943, Trajan (at far left) watches a battle, while two Roman auxiliaries present him with severed enemy heads. 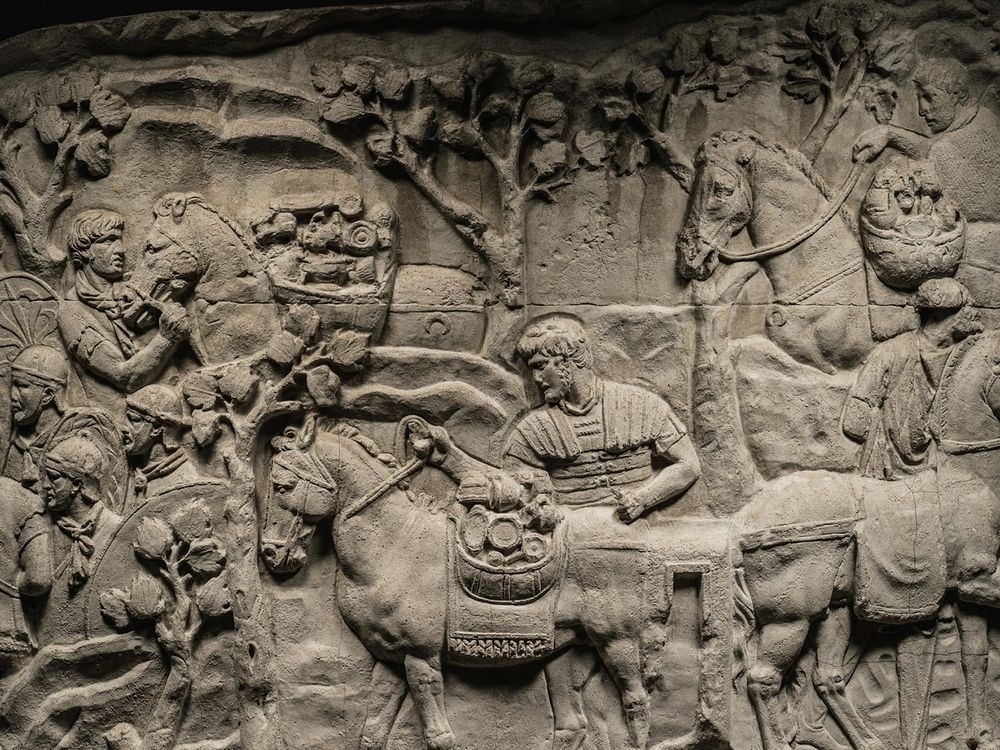 This scene shows Roman soldiers loading plunder onto pack animals after defeating Decebalus, the Dacian king. Casts such as this one preserve details on Trajan’s Column that pollution has eroded. 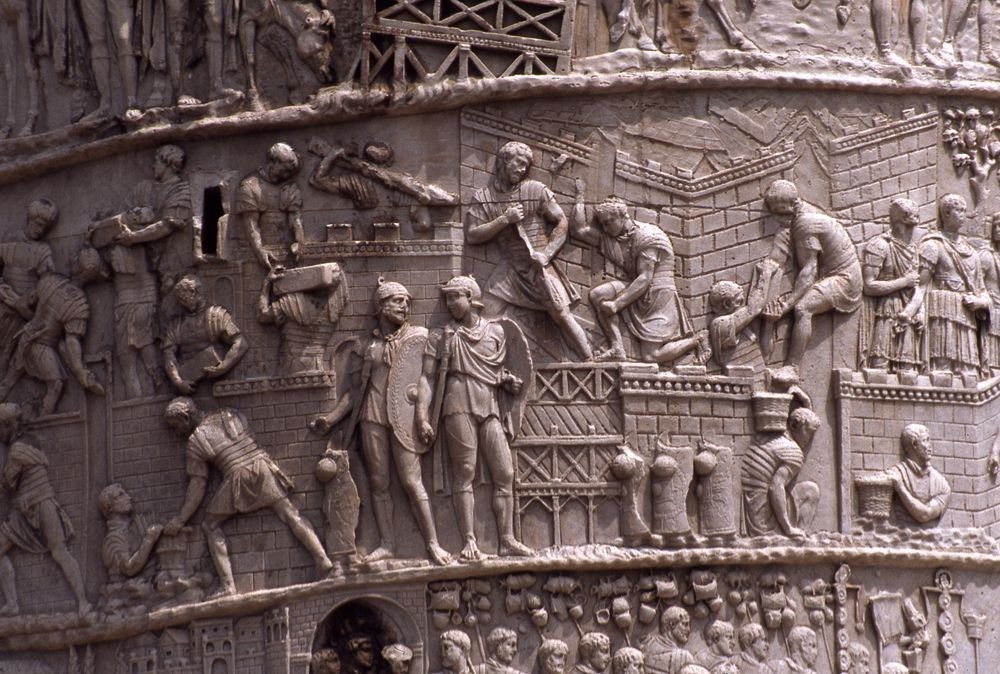 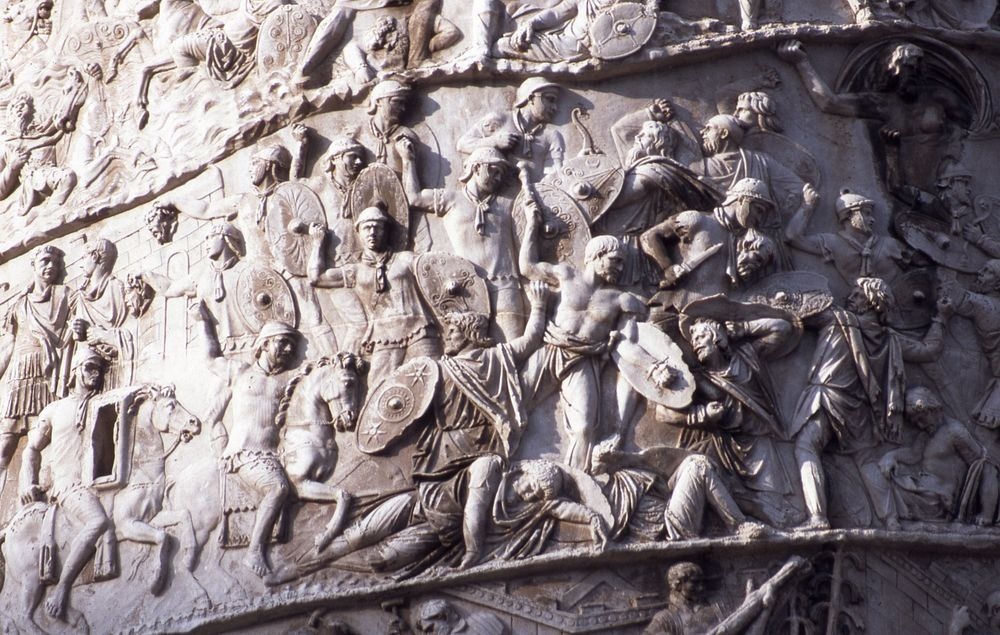 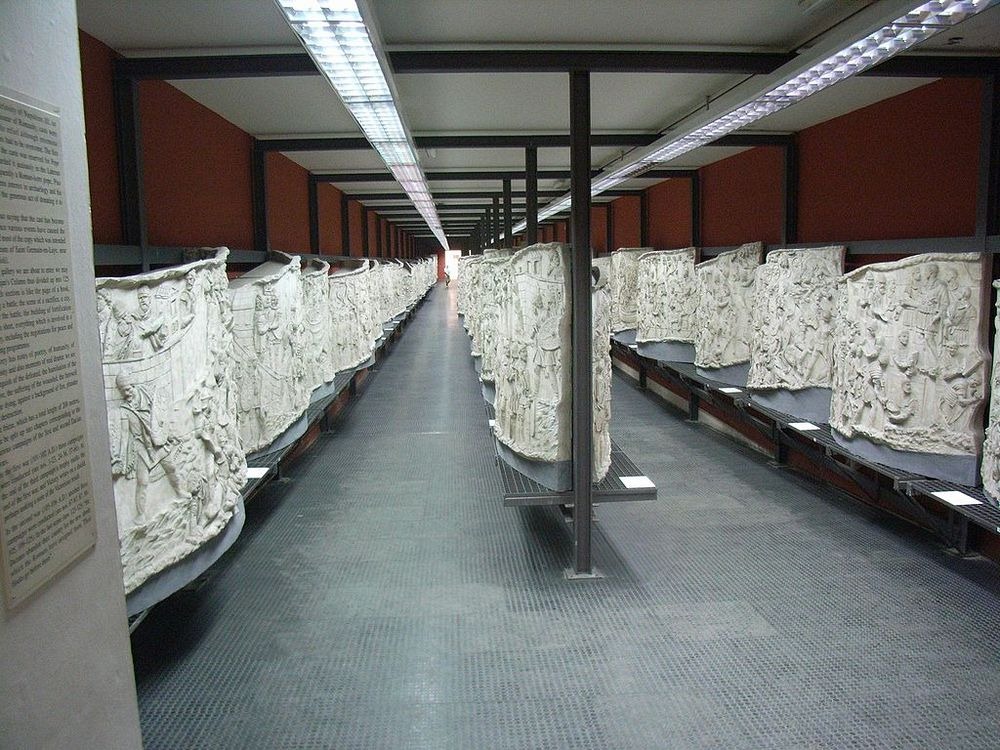 The plaster casts laid out at eye level in the Museum of Roman Civilization. 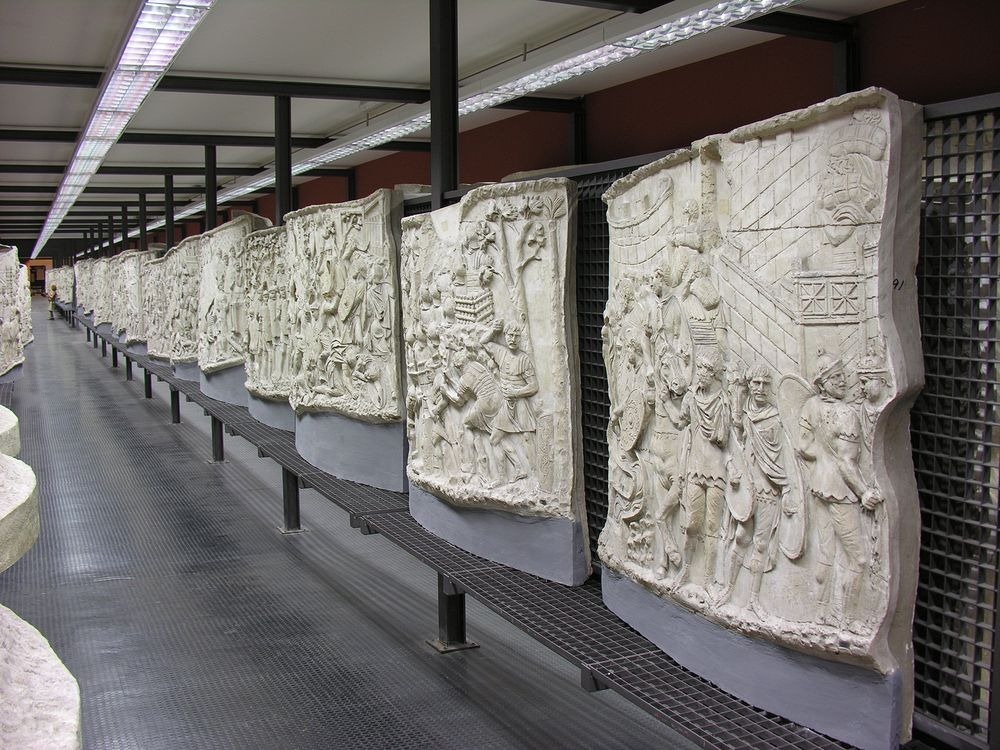 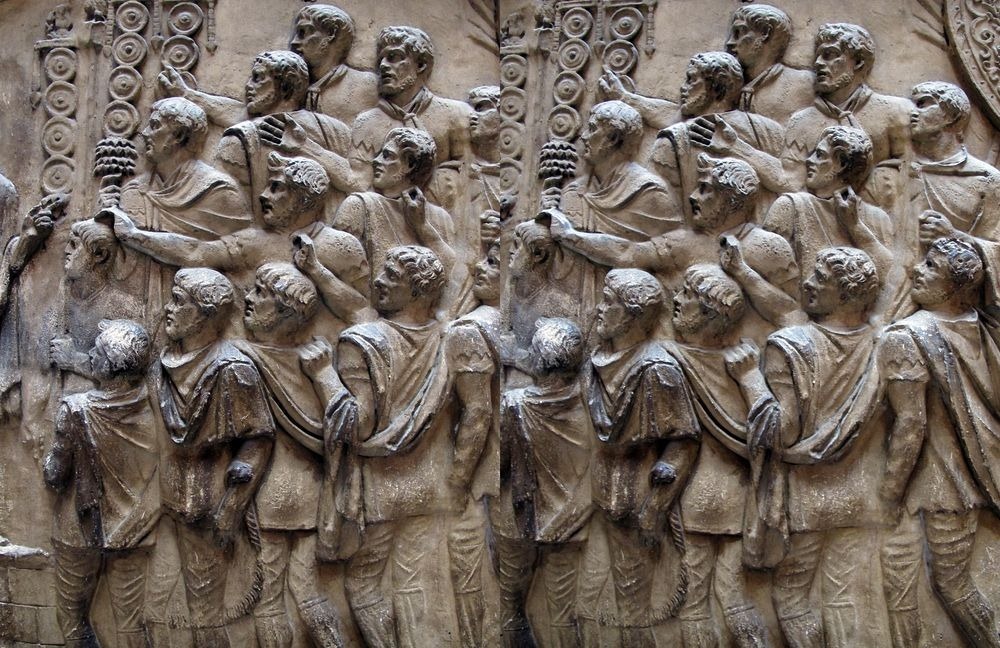