When Ivan the Terrible, the Grand Prince of Moscow and the first Tsar of Russia, ascended the throne in the middle of the 16th century, he decided to put an end to the Khanate of Kazan, a medieval Bulgarian-Tatar Turkic state occupying the territory of former Volga Bulgaria, and ruled by the descendants of Genghis Khan. The Khanates and the Muscovites had been at conflict for the last hundred years. The bone of contention between the two was Kazan’s strategic location on the Volga River near its confluence with the Kama, the major river in the western Ural Mountains. As long as Kazan existed as a threat, Russian movement into and beyond the Urals, as well as south toward the Caspian Sea, was blocked. 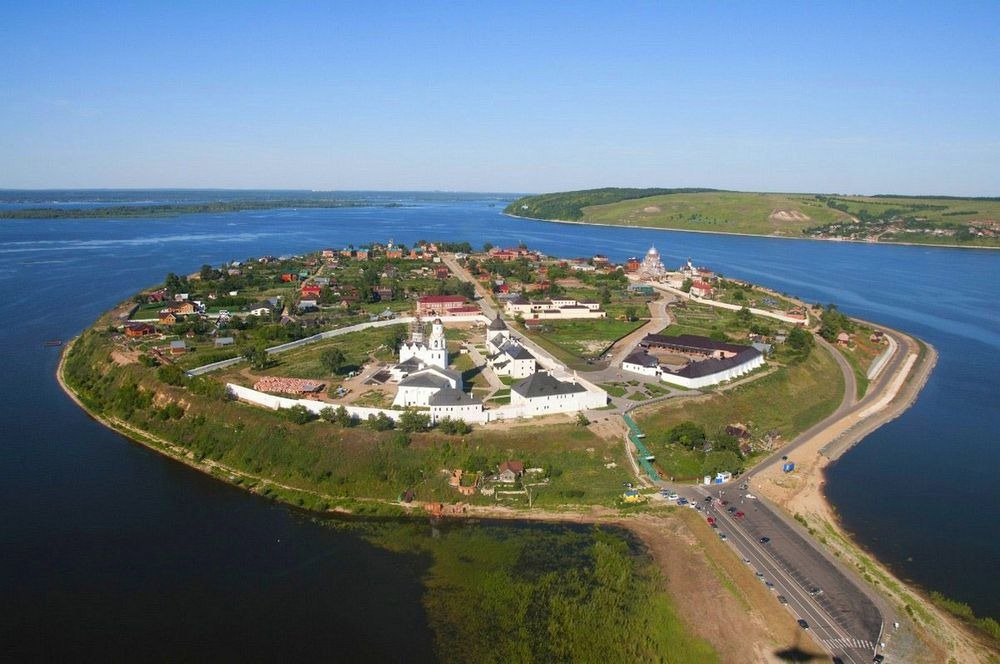 Between 1545 and 1550, Ivan led several campaigns against Kazan, the capital of the Khanate, but failed to seize the city. While returning from one such unsuccessful seize of Kazan, in 1550, the Tsar’s troops camped on the banks of the Volga near the confluence with the Sviyaga River, about 30km away from Kazan. This was when Ivan noticed a small wooded promontory, rising above the waters on the banks of the Volga. Ivan realized that in order to conduct a successful seize of Kazan he needed a base closer to the city from which he could launch his attacks. The promontory provided Ivan the perfect place for his base. It was both accessible and defensible, and its location in the Volga allowed him to keep under control the waterways and roads leading to Kazan, and eventually Kazan itself.

Ivan ordered the construction of a massive fortress, but not at the chosen site. Building a fortress on the promontory under the nose of the enemy would have been foolhardy. Instead, construction took place at Uglich, about 700 km upstream, where Ivan’s engineers could carefully ,design build and test without the lingering threat of enemy attack. After a trial assembly, the builders marked each log, disassembled the fortress and sent it floating down the river.

At the mouth of Sviyaga River, the rafts of logs were captured and reassembled like Lego bricks into a large fort whose territory exceeded that of the Moscow Kremlin. The fort was a full fledged town with walls, towers, gates, civilian buildings and even churches, and it was completed in just four weeks, thanks to its pre-fabricated design. It must have been a magnificent fort because pretty soon large segments of the local population started coming to the new town and requested Ivan to give them citizenship. In return, the locals swore their allegiance to the Tsar.

Ivan named the new island town Sviyazhsk, and it serve as a strong point for the capture of the city by the Muscovite army. After the defeat of Kazan, Sviyazhsk continued to grow as an outpost of Christianity and the center of Russian culture and orthodoxy among neighboring peoples. 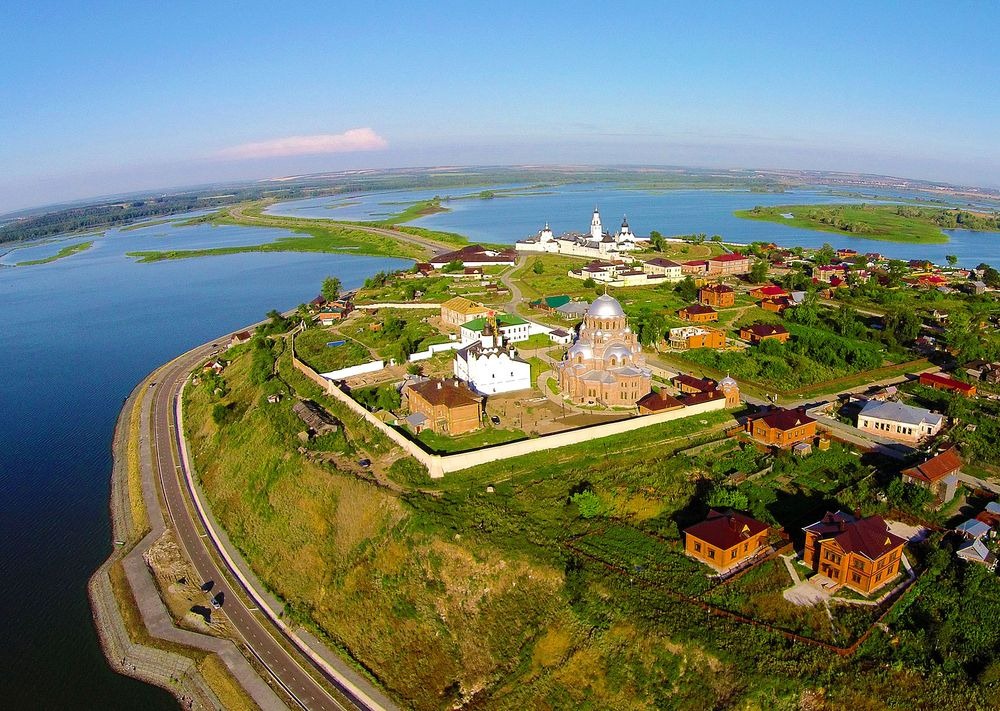 The dark days of Sviyazhsk’s history started in the first half of the 20th century after the October Revolution. The Bolsheviks destroyed about half of Sviyazhsk’s churches. The remaining buildings and monasteries became cells for prisoners of a forced labor camp and later a Gulag prison. The culmination of Sviyazhsk’s story came in 1957 after the construction of the Kuibyshev Water Reservoir when the entire area around Sviyazhsk was flooded. More than three-fourth of the town was wiped out, leaving only the historic downtown above water. Sviyazhsk became a small island, connected to the mainland by a serpentine road. It’s population decreased from 2,000 to just 250.

Fortunately, in 1960 Sviyazhsk was declared as a monument of Russian history and culture, and was added in the tentative list of UNESCO’s world heritage sites. The historic city is currently being revived with restoration of old churches and construction of new houses. Tour operators are also promoting Sviyazhsk as a tourist destination. Life is slowly getting back to normal. 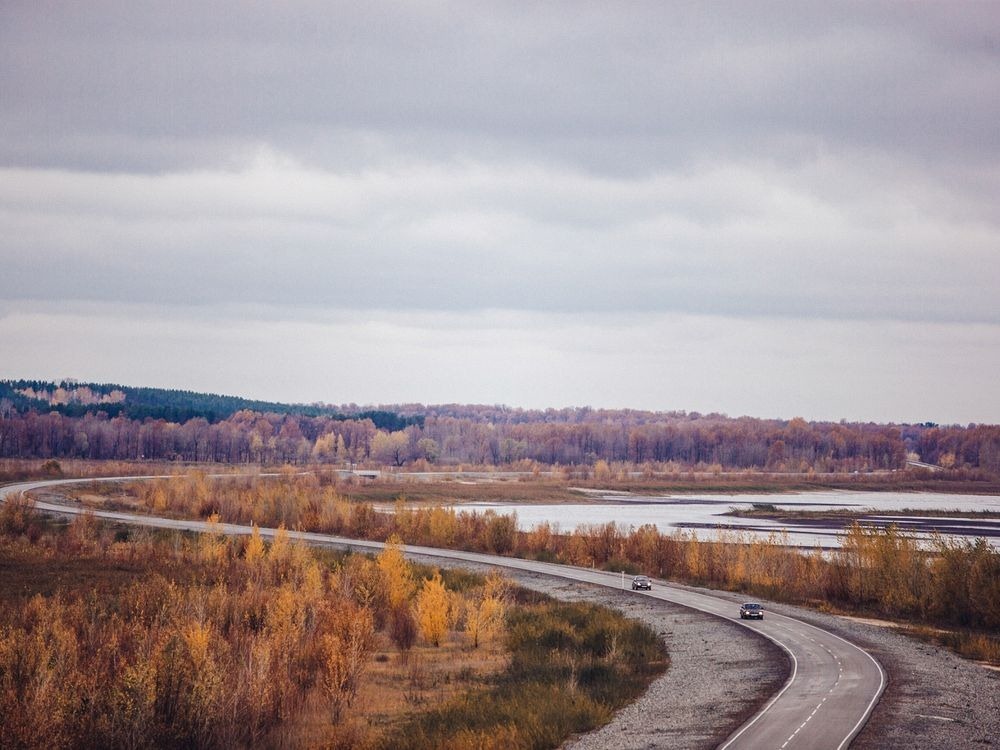 One thought on “The Island Town of Sviyazhsk”