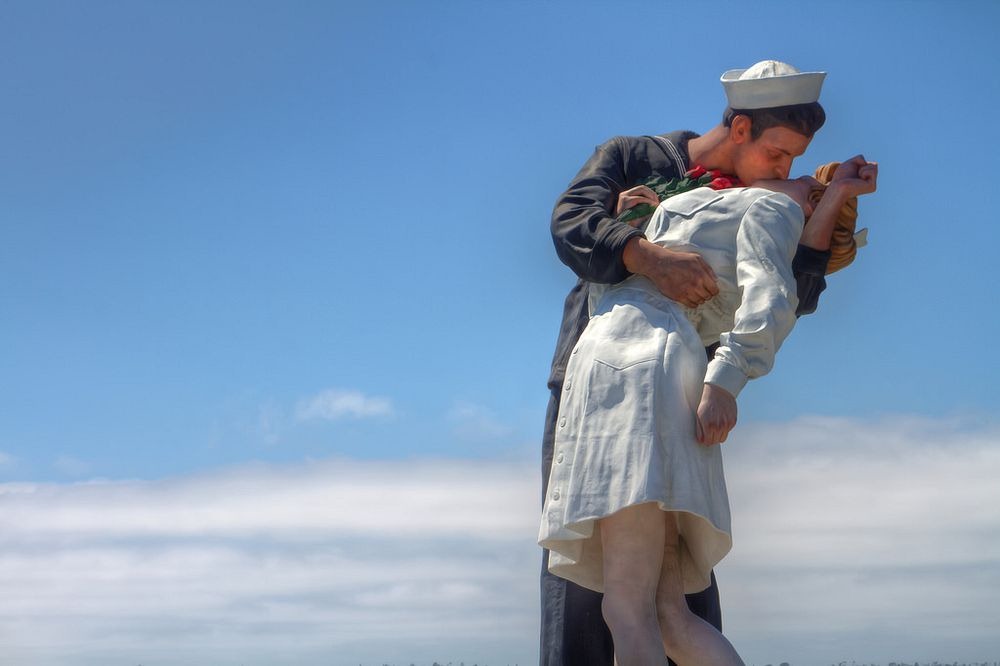 On San Diego’s harbor, right next to the maritime museum aboard the aircraft carrier USS Midway, stands a 25-foot-tall statue depicting a sailor kissing a nurse. The sculpture titled “Unconditional Surrender” is based on a famous photograph clicked by Alfred Eisenstaedt in Times Square of New York, on August 14, 1945, after U.S. President Harry S. Truman announced the end of World War II. The photograph appeared on the 1945 issue of Life magazine, and since then it has become one of the most iconic image of America’s victory celebration.

But “Unconditional Surrender”, as well as the original photograph, has been drawing heat from women’s right groups as well as other vocal members of the public, in recent years, for depicting what appears to have been a sexual assault rather than a celebration of love between two willing partners. 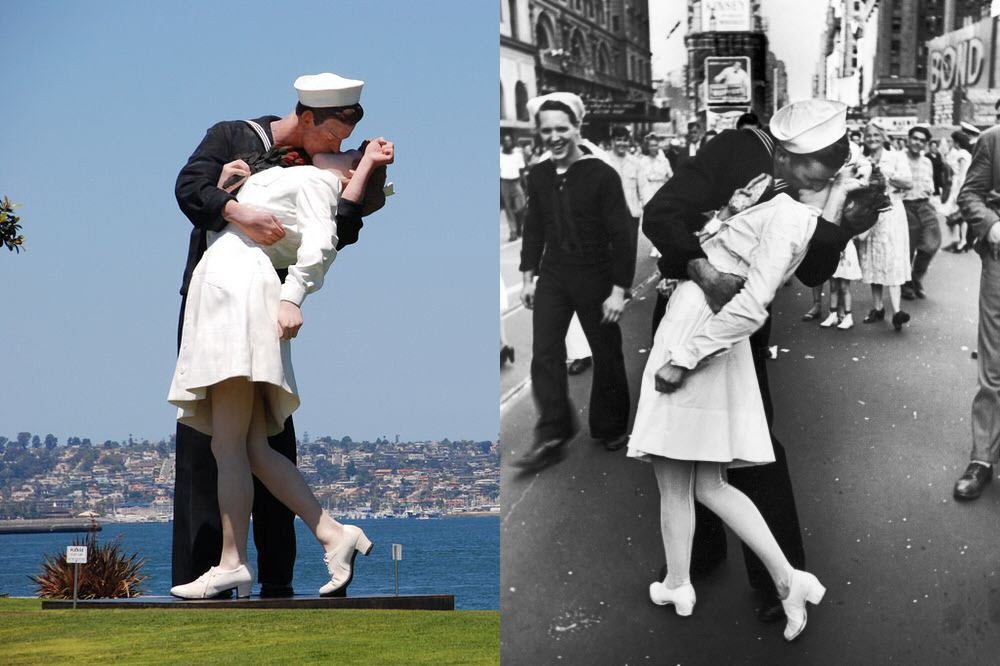 “Unconditional Surrender” in San Diego, on the left. Photo credit: Kevin Harber/Flickr. The original photograph “VJ-Day Kiss” by Alfred Eisenstaedt, on the right.

As news of Japan’s surrender and the end of the brutal conflict spread throughout America, people began to spill out on to the streets to celebrate. Amid joy and relief, booze flowed, people danced, kisses were planted. But some of the jubilation quickly devolved into riots, and some into unprovoked acts of assault, as in the case of 21-year-old Austrian-American and dental hygienist Greta Zimmer Friedman. Like others, Greta too was celebrating the end of World War II in Times Square when a sailor, later recognized as George Mendosa, grabbed her by the waist and delivered a forced kiss.

I was walking through the crowds on V-J Day, looking for pictures. I noticed a sailor coming my way. He was grabbing every female he could find and kissing them all–young girls and old ladies alike. Then I noticed the nurse, standing in that enormous crowd. I focused on her and just as I’d hoped, the sailor came along, grabbed the nurse, and bent down to kiss her.

Controversy ignited in 2012 when a London-based blogger argued that the picture depicted not a moment of romance, but a “sexual assault by modern standards,” pointing to extracts from Greta Friedman’s interview where she said things like — “It wasn’t my choice to be kissed,” and “That man was very strong. I wasn’t kissing him. He was kissing me.” Friedman also described his embrace as a “vice-like” grip from which she couldn’t escape. Mendonsa himself admits to having been intoxicated at the time. 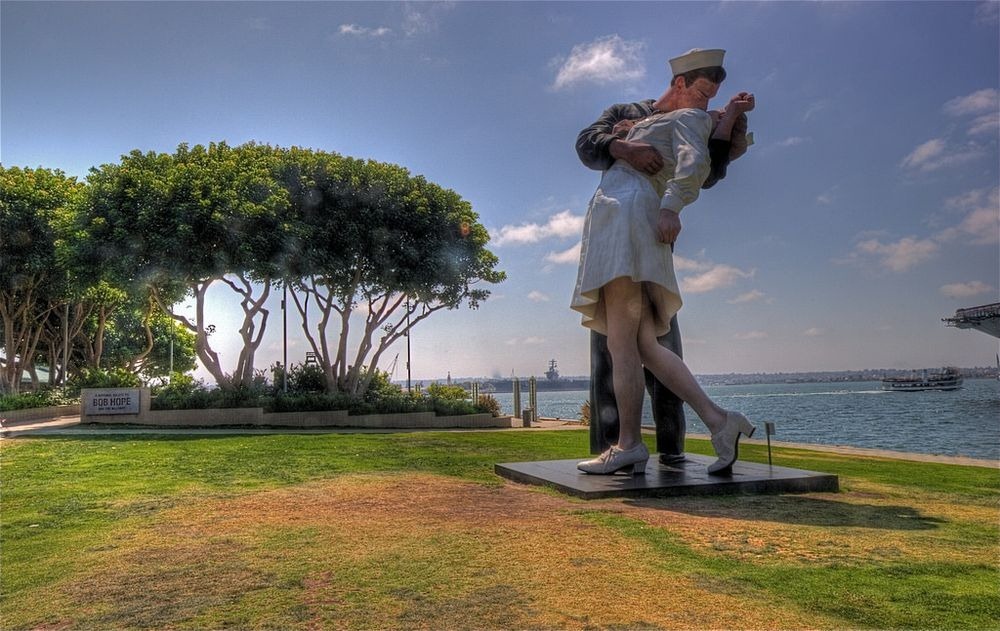 Neither Mendonsa nor Friedman were aware of the photograph or their role in history until many decades later. In 1980, when Life put out a request asking the subjects of the photo to come forward, one of Mendonsa’s friend showed him the photograph. Mendonsa recognized himself in the photo and contacted the magazine. Although many had come forward, claming to be the famous sailor, Mendonsa was decisively identified due to his matching scars and tattoos.

Likewise, three women came forward claiming to be the nurse, but Greta Friedman had already recognized herself in the photo when she saw it the 1960s. It was many years later before her identity was confirmed.

Greta Friedman, however, doesn’t believe Mendonsa was sexually assaulting her because she understood the circumstances in which the act was performed.

“I was grabbed by a sailor, and it wasn’t that much of a kiss, it was more of a jubilant act that he didn’t have to go back [to the Pacific]”, she said in an interview to The Library of Congress. “It was just somebody really celebrating,” she added.

Over the years the photograph became an enduring symbol of the joy and relief felt by a nation at the end of the war. The famous image has even been commemorated on a U.S. postage stamp. 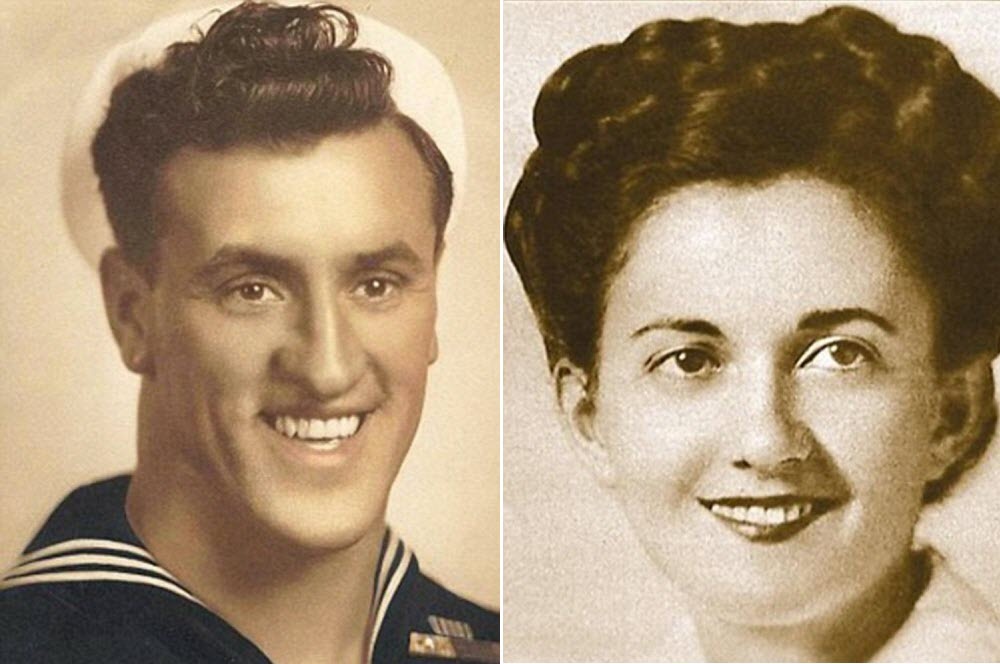 George Mendosa, the sailor, and Greta Zimmer Friedman, the nurse.

The sculpture “Unconditional Surrender” created in the likeness of the famous kiss was designed by American artist Seward Johnson, who is also responsible for the controversial 26-foot-tall sculpture at Palm Springs, California, of Marilyn Monroe trying to hold down her skirt against a gust of wind. The sculpture titled “Forever Marilyn” was criticized by citizens for its provocative stance which gave viewers the chance to gawk at her lacy underwear.

“Unconditional Surrender” was originally built out of styrofoam for a temporary exhibition in Sarasota, Florida in 2005. Sensing a possible interest in the sculpture, Johnson offered three different versions made out of three different materials —styromfoam, aluminum, and bronze — at three different prices, for any body who would like to have the sculpture installed in their cities or towns. Sarasota bought the aluminum version and installed it in Island Park, on the bay front by the Marina. It was struck down by a car in 2012, but is now replaced.

But the bronze copy that San Diego bought for $1 million is the most famous. Other copies of “Unconditional Surrender” have appeared in Hamilton, New Jersey, Pearl Harbor, and in Caen, France. 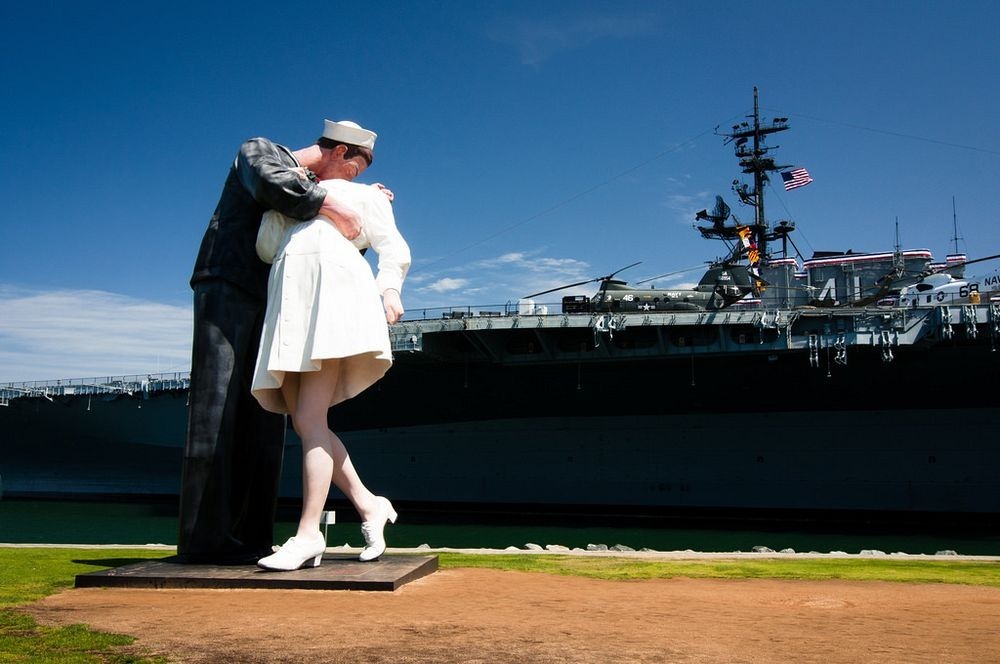 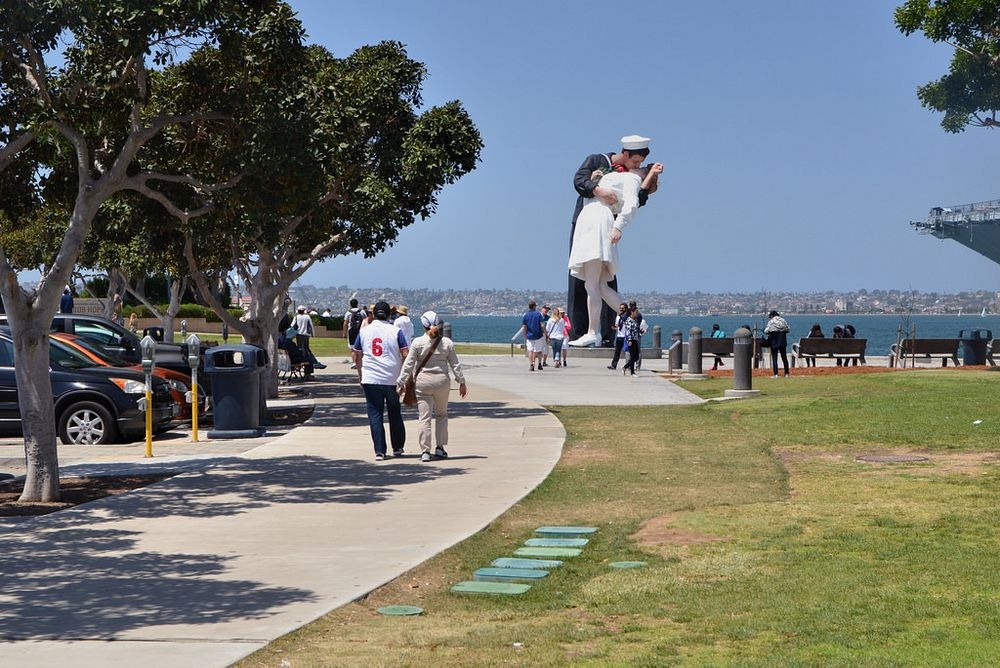 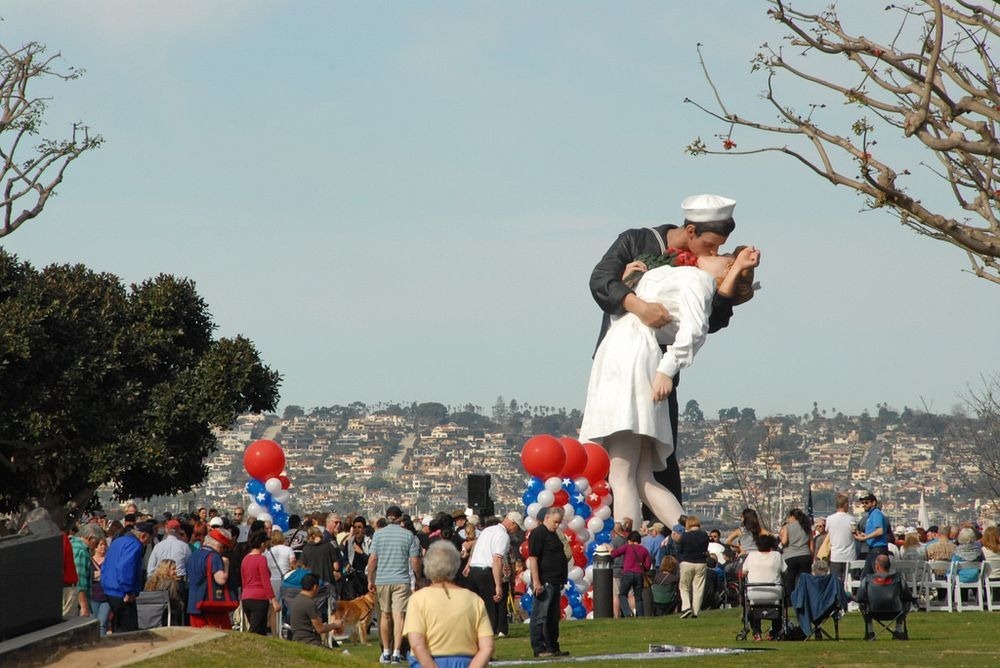 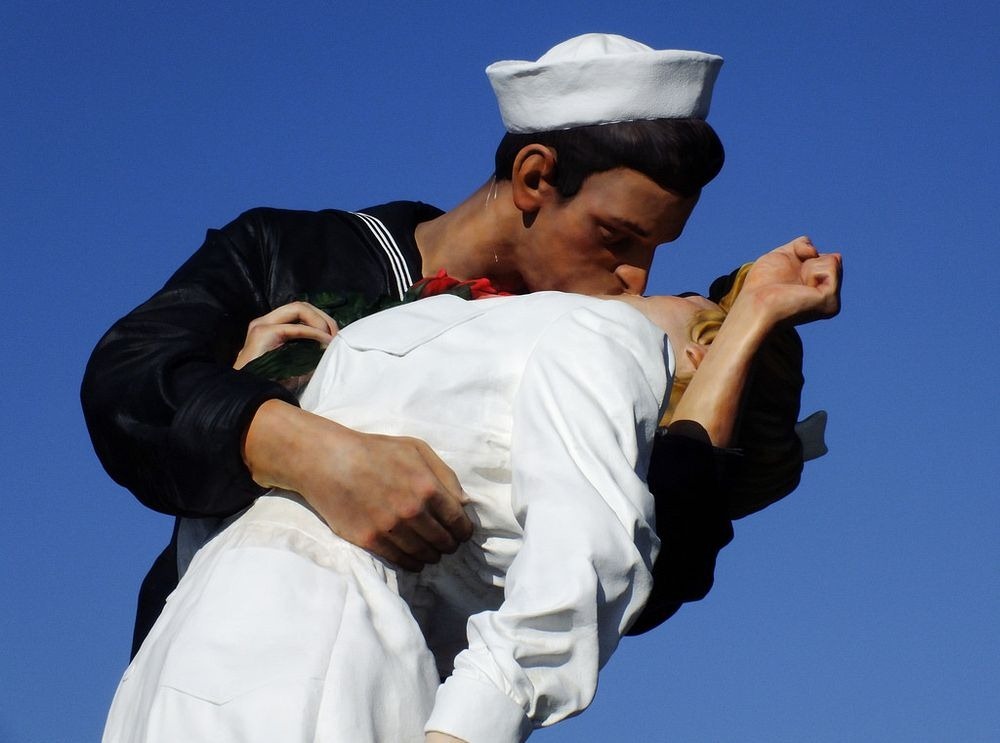 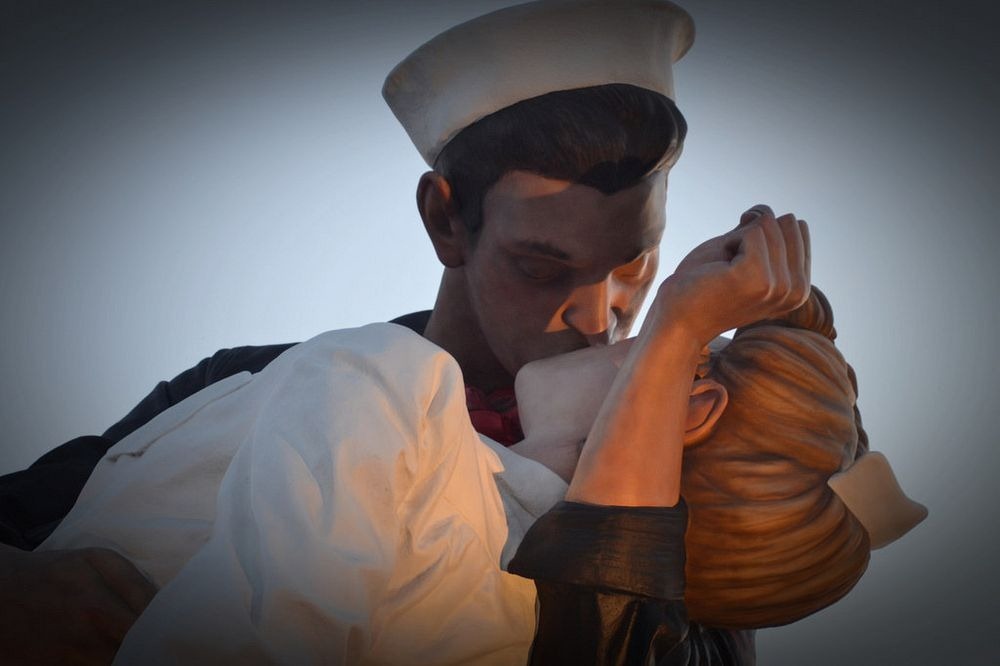 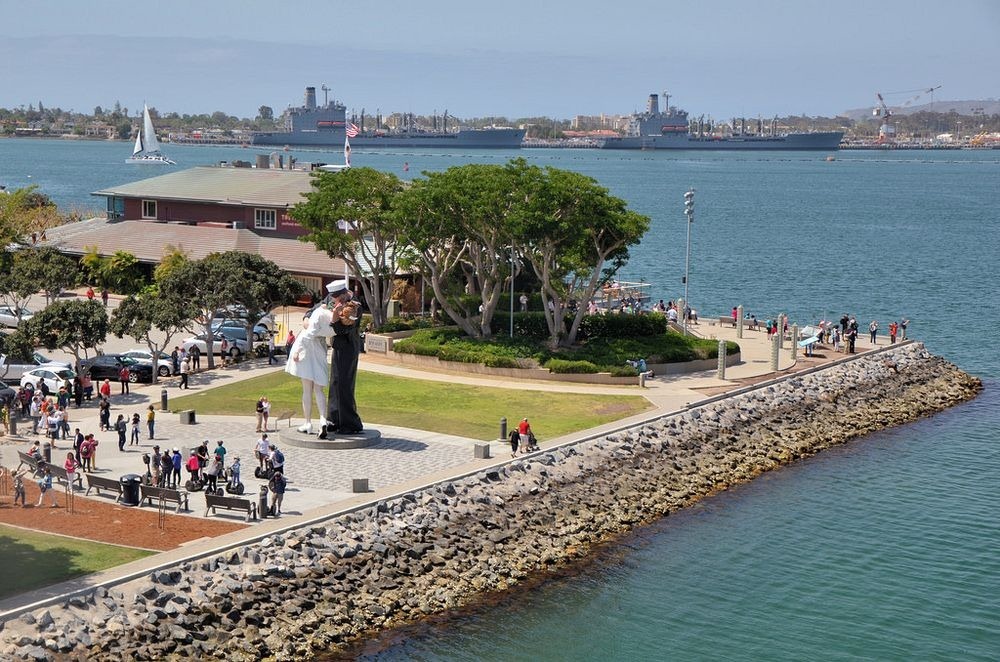