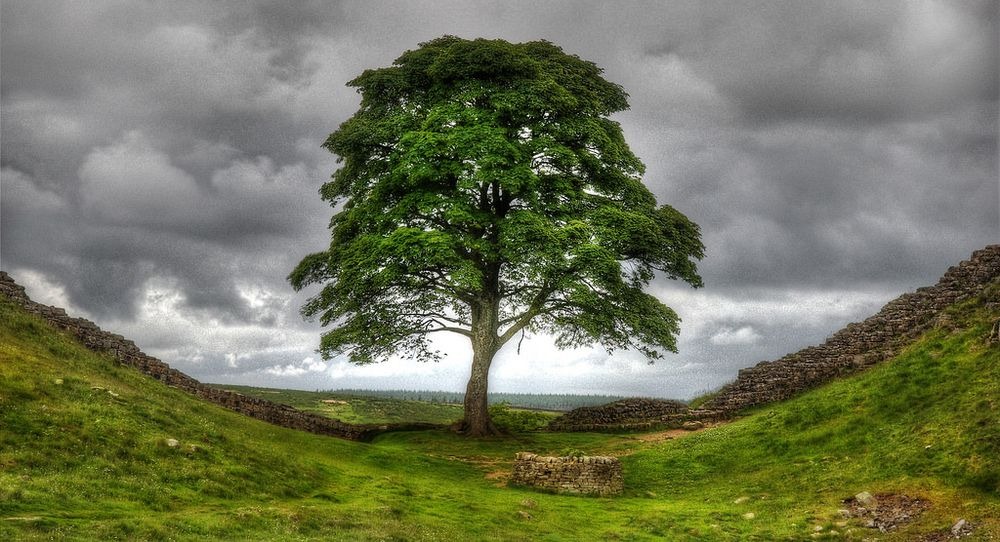 Movies, music and literature has brought fame to millions, but not all celebrities are humans. Sometimes, a tree becomes the unexpected center of attraction. Here are some real trees that have found fame through art and fiction. 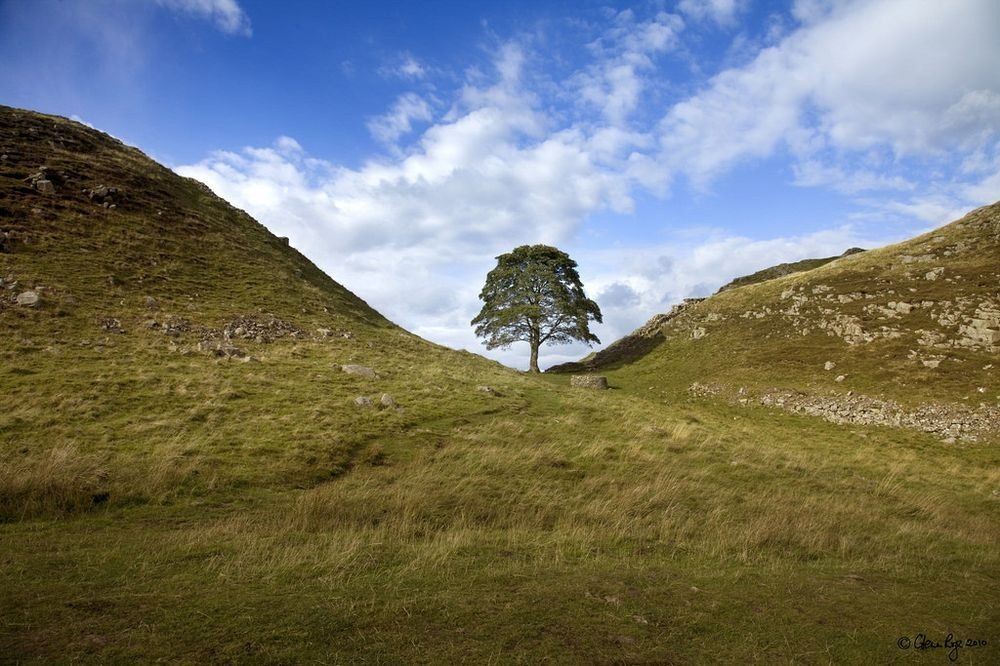 One of the most photographed spots in the entire Northumberland National Park in England is the Sycamore Gap. Here, the Hadrian Wall, that stretches from coast to coast across the width of northern Britain makes a dramatic dip between two small mounds of earth. In the dip, grows a sycamore tree. The tree was made famous after it appeared in the 1991 movie Robin Hood: Prince of Thieves starring Kevin Costner. It has been known as The Robin Hood Tree ever since. 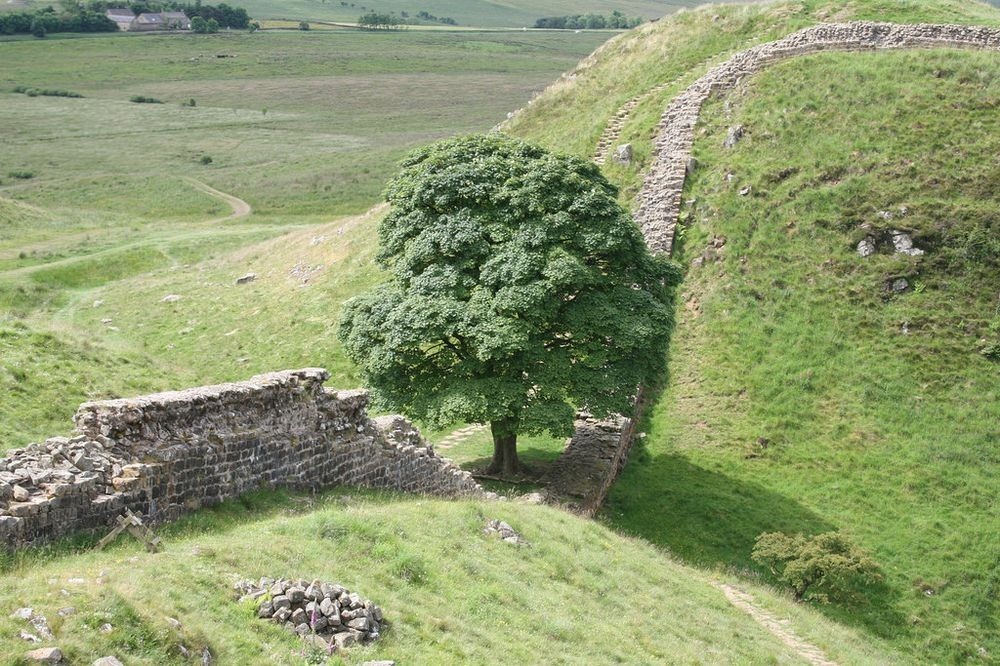 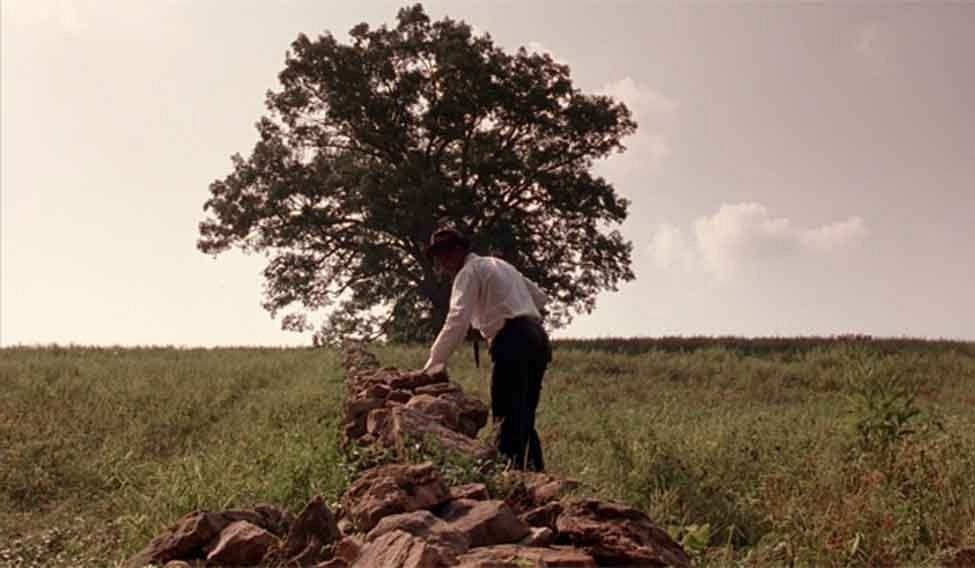 “Promise me, Red. If you ever get out… find that spot,” Andy Dufresne told Red one day in prison.

Andy escapes, but Red remains serving the rest of his forty years until he is paroled. He travels to the spot as directed by Andy, and finds there a white oak. Buried near the base of the tree, Red finds a box containing a letter from Andy and cash to buy a bus ticket to visit him in Mexico.

The scene is from the 1994 classic film, The Shawshank Redemption, and the white oak, where filming took place, once stood near Malabar Farm State Park in Lucas, Ohio, United States. Today, it draws up to 35,000 visitors annually. The tree has been called one of the most iconic trees in movie history. Sadly, the tree was knocked down by strong winds in July 2016. 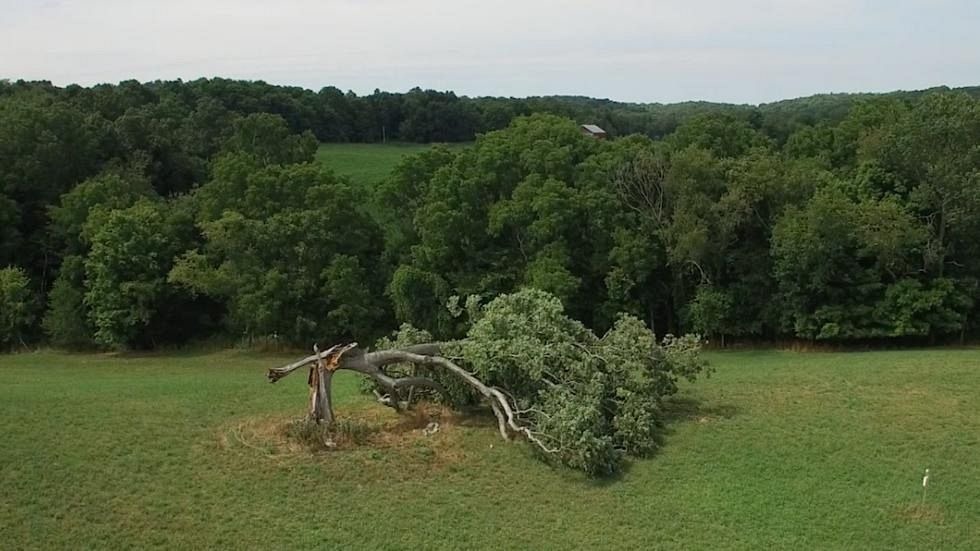 The Shawshank Tree after it fell. 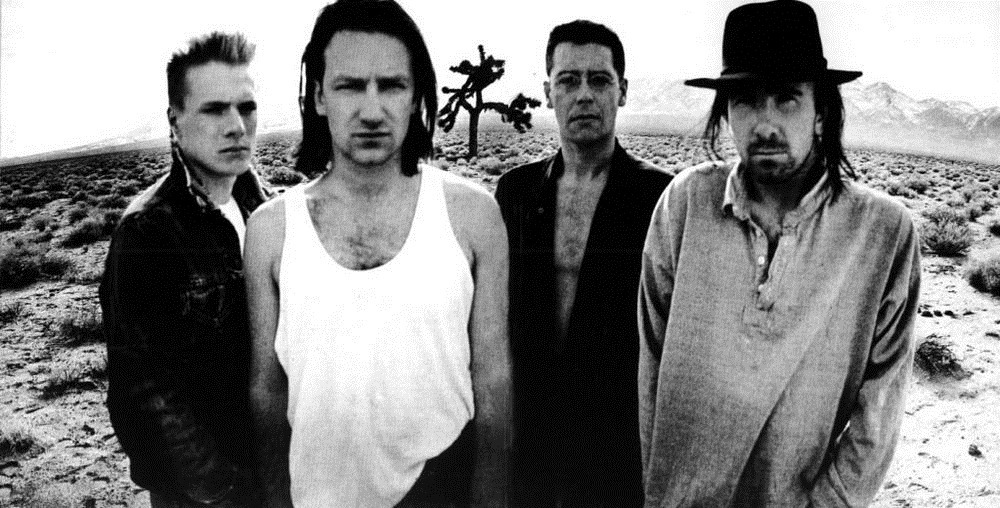 Members of the rock band U2 posing before the Joshua tree.

In 1986, when the legendary Irish rock band U2 was preparing to release their fifth studio album, then tentatively named The Desert Songs, inspired by America’s desert geography, they sent their photographer, Anton Corbijn, in search for locations in the US that would capture this.

One evening, after a day’s shooting, Corbijn told the band about Joshua trees, a hardy and twisted plants that grows in the deserts of the American Southwest, and suggested that they use it as their album cover. Found mostly in the Mojave Desert, the Joshua tree is so called because it is said to look like the Old Testament prophet Joshua with hands reaching up to the sky in prayer. Bono, the lead singer, was so pleased with the religious significance that he changed the name of the album to Joshua Tree. The next day, while driving through the desert, they found a single tree. They stopped the bus and spent 20 minutes photographing the lone plant. 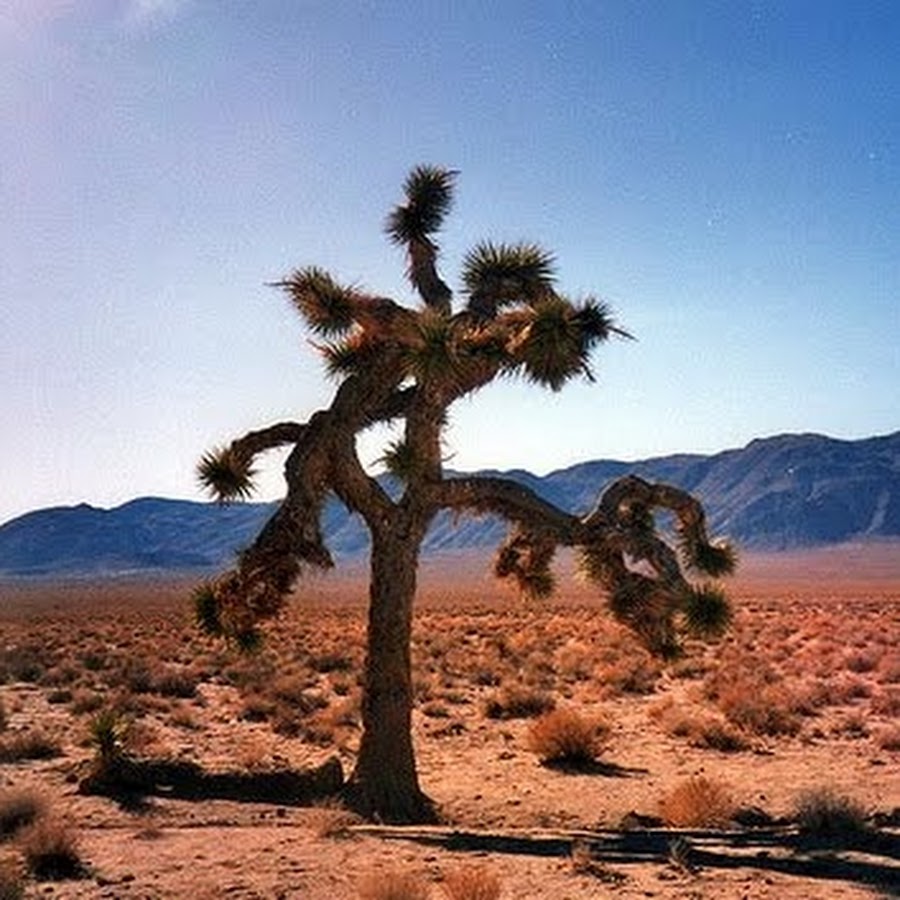 The tree when it was still standing. Photo credit: Joho345/Wikimedia

Joshua Tree was released in 1987 featuring such hit singles as “With or Without You”, “I Still Haven’t Found What I’m Looking For”, and “Where the Streets Have No Name”. The album sold over 25 million copies making it one of the world’s best-selling albums, and U2 turned from the most popular band from Ireland into the biggest band in the world.

Once the album came out, million of people began asking where the famed tree is located. Many went out seeking the exact spot using the image on the album cover as reference. At least two people have died of exhaustion looking for it. Eventually, the tree was found and a plaque commemorating it was installed nearby. Sadly, the tree was blown down in October 2000 after living for approximately 200 years. The body of the fallen tree still lies on the desert floor. It continues to bring U2 fans from around the world. 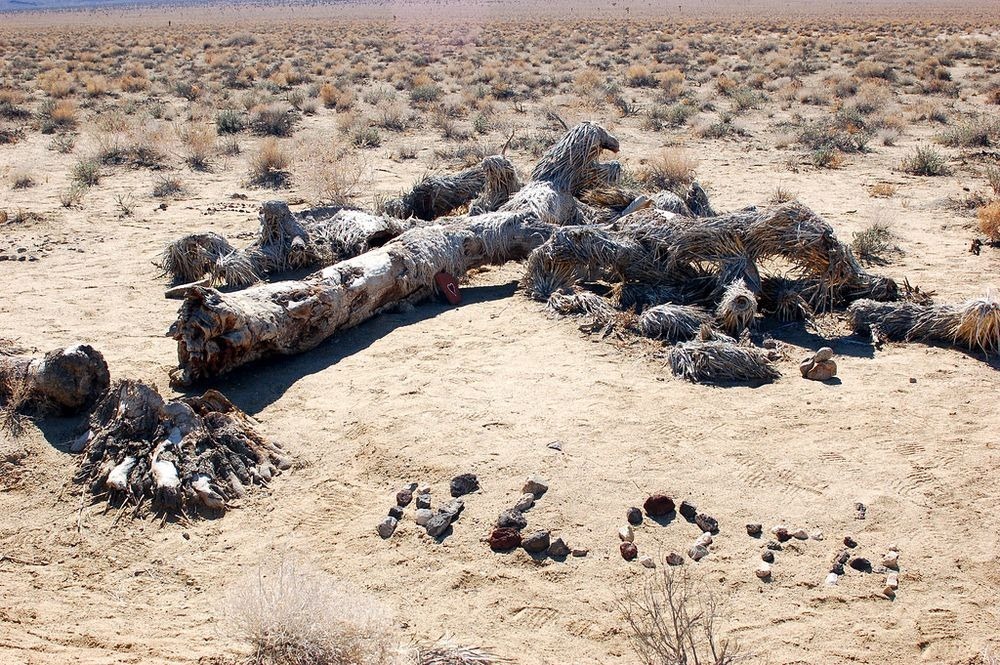 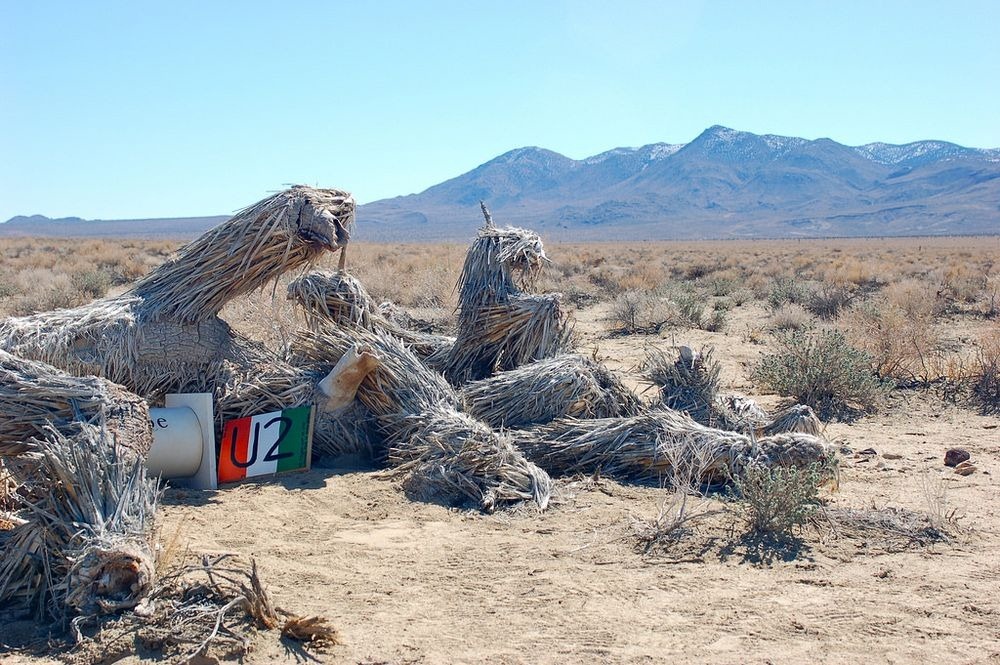 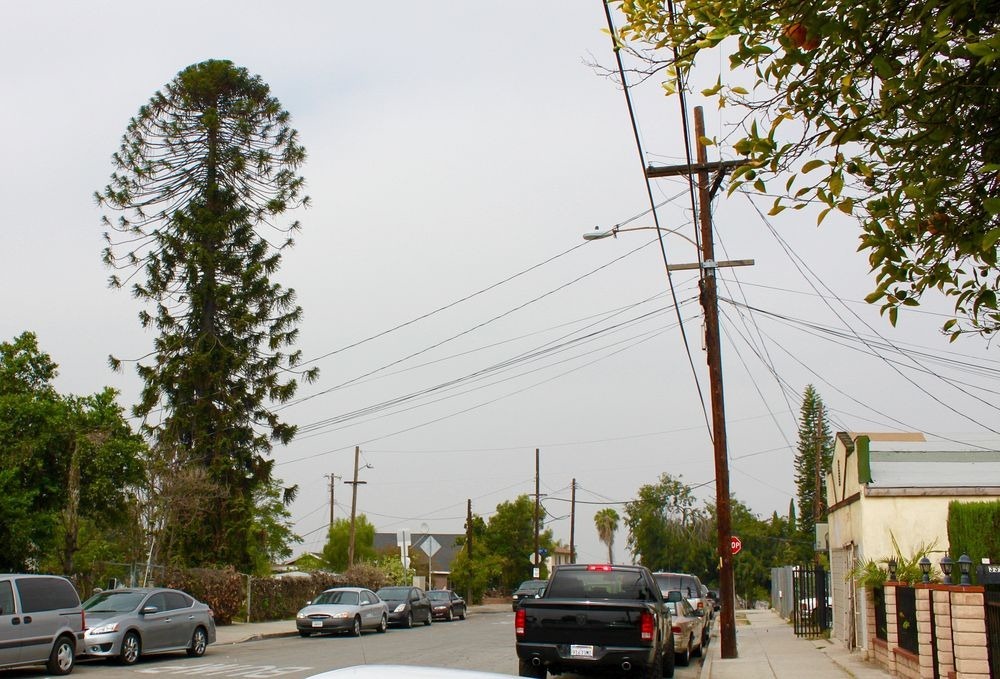 Although the 1993 Taylor Hackford’s crime drama Blood in Blood Out was a box-office disaster, it does have an unusually broad following. You might not meet many in the streets, but come to Boyle Heights neighborhood in East Los Angeles and you will be surprised to learn how many people make pilgrimage to the Australian Bunya Pine that sits on the corner of Folsom and N Indiana Streets. It was here where the movie’s story played out. In one of the movie’s best-known scenes, Damian Chapa’s character stares at it longingly and says, “That tree is East Los to me. It’s good to be home.” 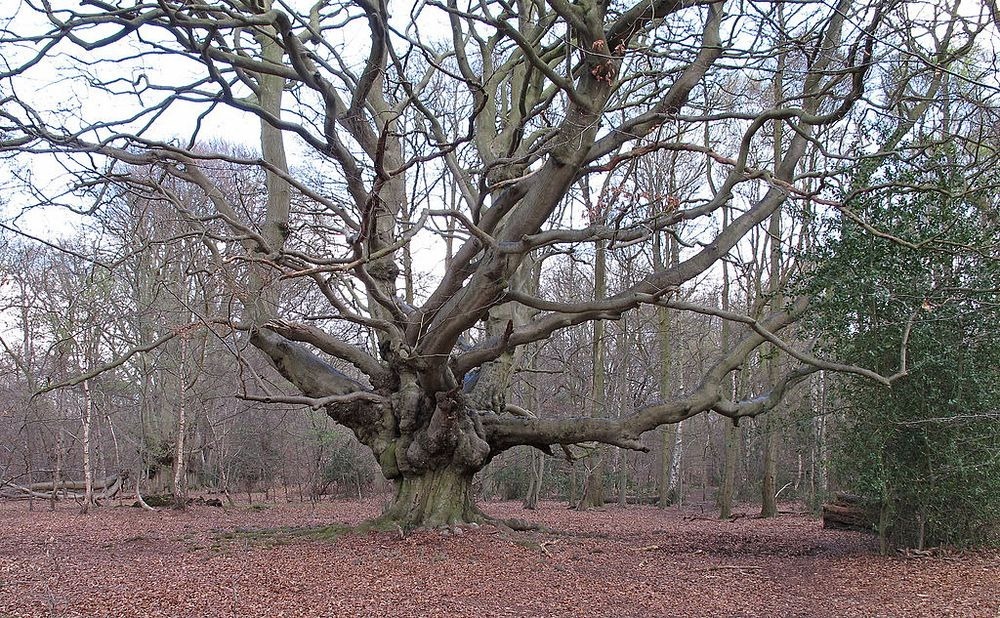 An ancient pollarded beech, known as the “Queen Beech”, near Hertfordshire, Great Britain, rose to fame when it played the role of the magical Whomping Willow in the 2004 Harry Potter film The Prisoner of Azkaban.

The 400-year-old tree in Frithsden Beeches on Berkhamsted Common was first noted by the naturalist Richard Mabey in his book “Beechcombings”. The tree was famous in its own right before it became the Whomping Willow. The tree was adopted in 1988 by a national conservation campaign to protect ancient trees, and a certificate signed by the Archbishop of Canterbury was awarded to the community at the time.

The tree no longer stands, unfortunately. It fell under its own weight in 2014. 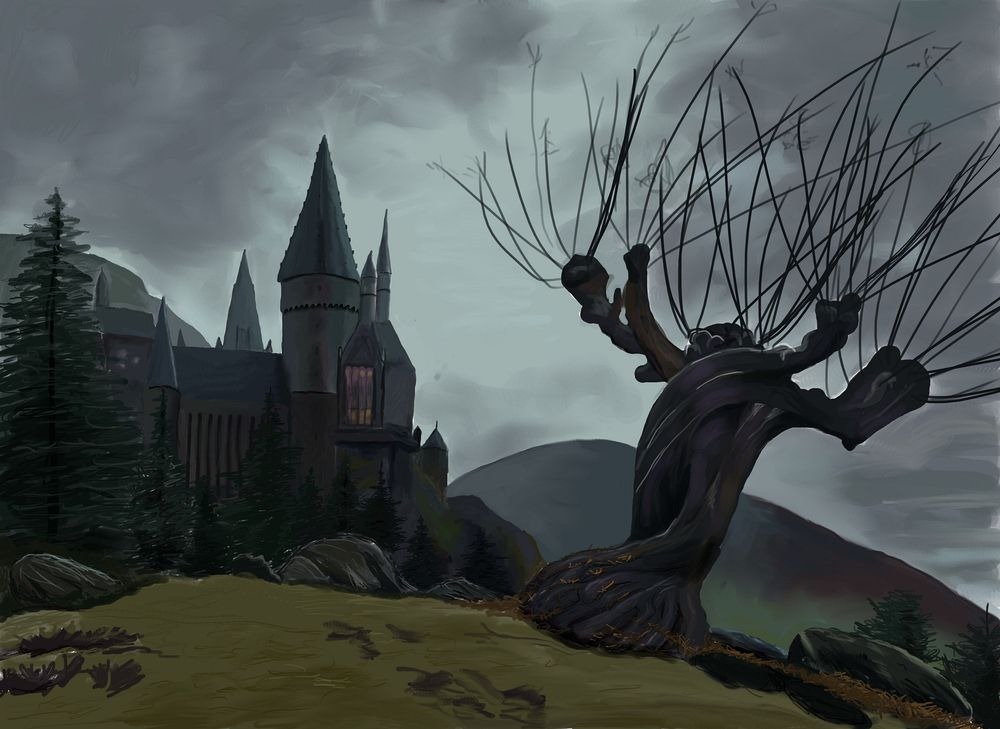 A sketch of the Whomping Willow on the grounds of Hogwarts. Photo credit: www.blueforest.com 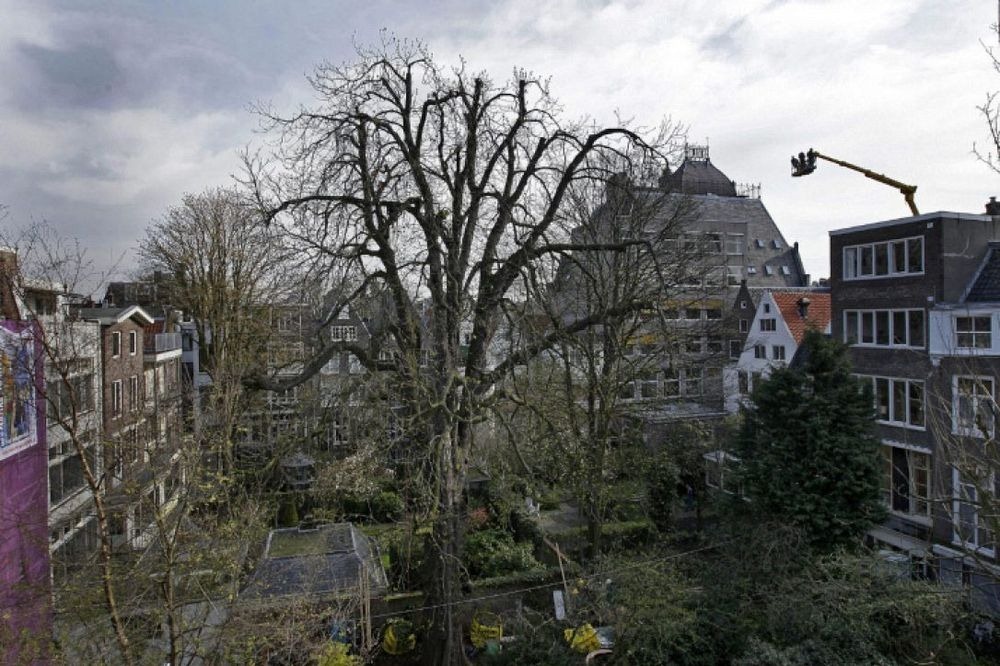 Just outside the secret annexe, where Anne Frank and her family spent two years in hiding during the Nazi occupation of the Netherlands, grew a horse-chestnut tree. Every morning Anne used to go to the attic and look at the tree through a window.

“The bare chestnut tree, on whose branches little raindrops shine, appearing like silver, and at the seagulls and other birds as they glide on the wind. […] As long as this exists, I thought, and I may live to see it, this sunshine, the cloudless skies, while this lasts I cannot be unhappy,” she wrote on her diary. Published posthumously, The Diary of Anne Frank is one of the best books of the 20th century.

The tree was cared for many years by Pius Floris Tree Care of Amsterdam. But in 2010, a strong gale blew down the tree. It was about 170 years old. But saplings from the original tree now grow all over the Netherland, the United States and the United Kingdom. 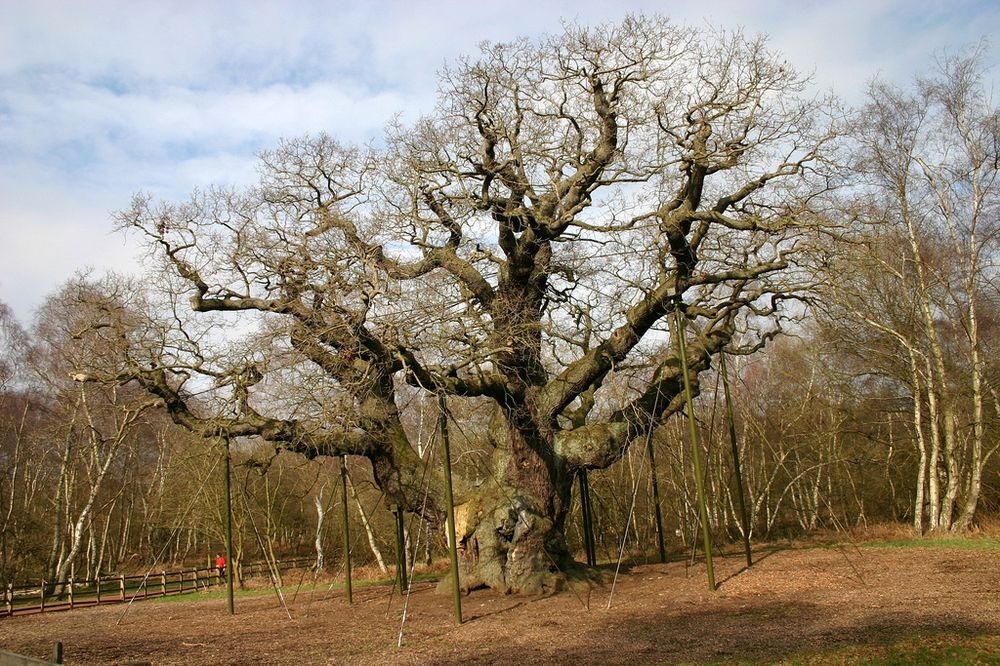 Near the village of Edwinstowe, in Sherwood Forest, Nottinghamshire grows a large English oak called Major Oak. According to local folklore, it’s under the shelter of this 800-year old tree that Robin Hood and his merry men slept.

The tree was originally named the Cockpen Tree in the mid 1800’s, as the sport of cock fighting once took place there. In 1790, Major Hayman Rooke, a noted archaeologist, included the tree in his popular book about the ancient oaks of Sherwood. Since then, the tree has been called The Major Oak. Today, it is Britain’s most famous tree. 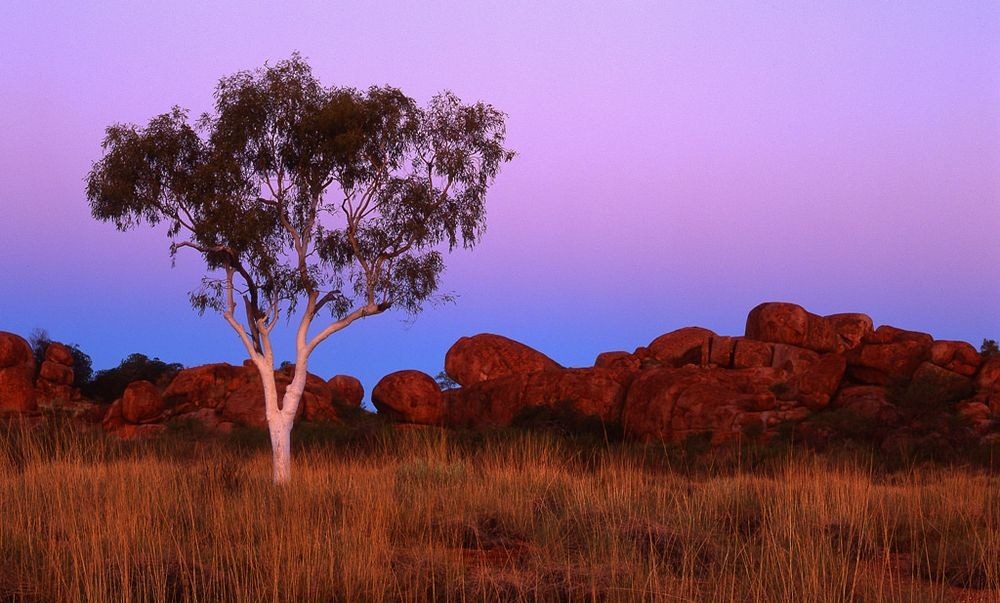 Corymbia aparrerinja, commonly known as ghost gum, is an iconic evergreen tree native to Central Australia. The tree grows up to 20 meters in height and has a smooth, white bark. In summer, they bear white flowers which turn to woody brown goblet shaped fruits.

The trees gained prominence with wider public in the 20th century through the paintings of aboriginal artist Albert Namatjira, who created a number of vivid watercolour landscape paintings of the Australian outback. Namatjira is a household name in Australia. Reproductions of his works hung in many homes throughout the nation. 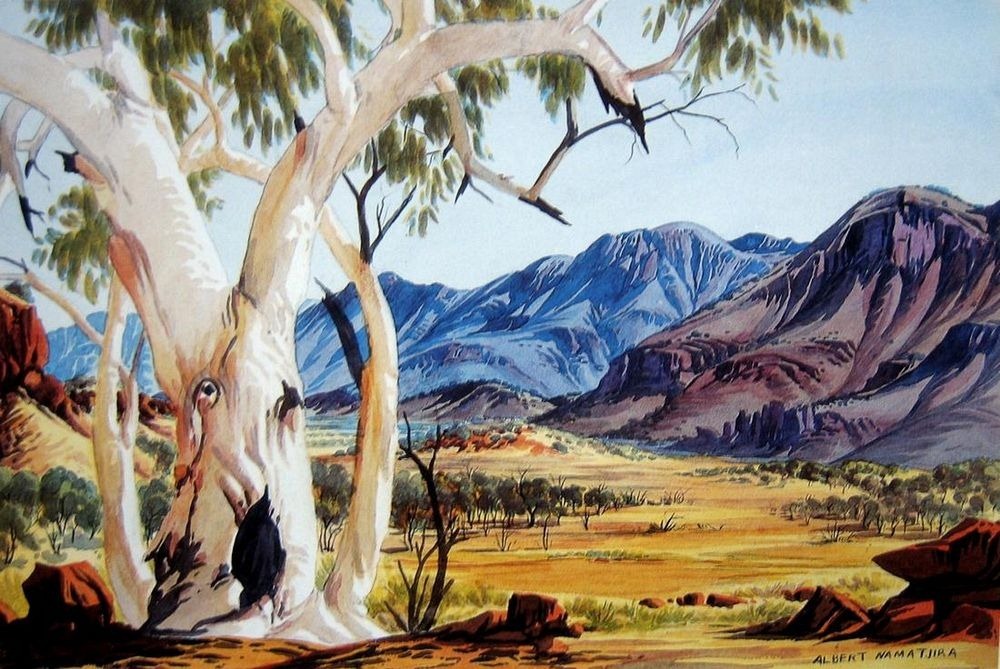 A painting by Albert Namatjira 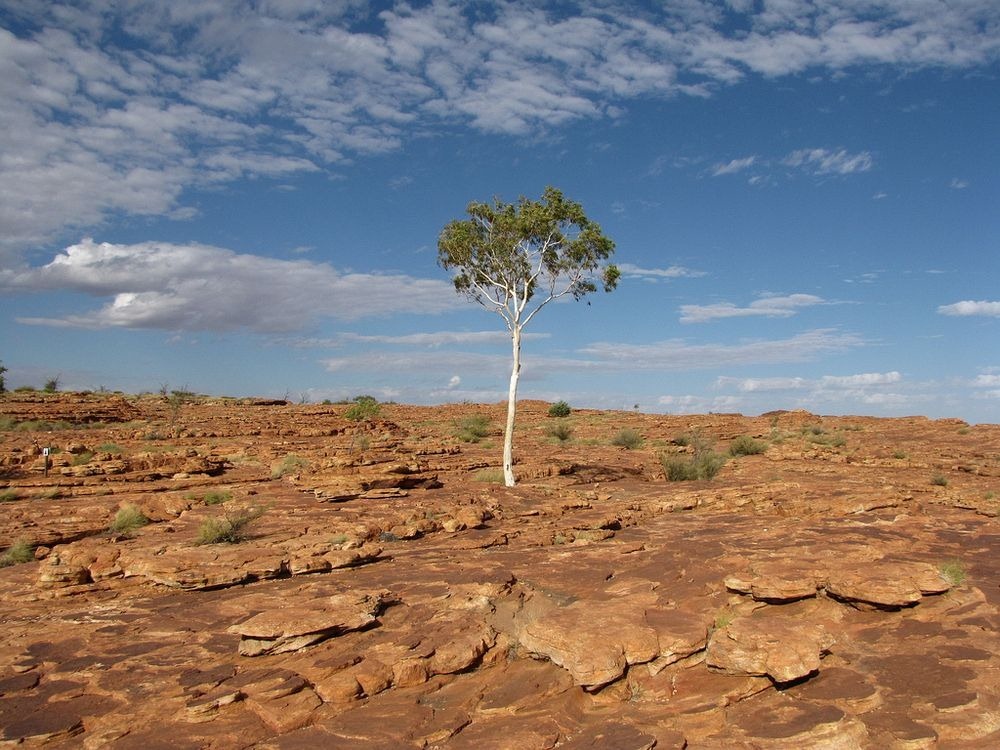 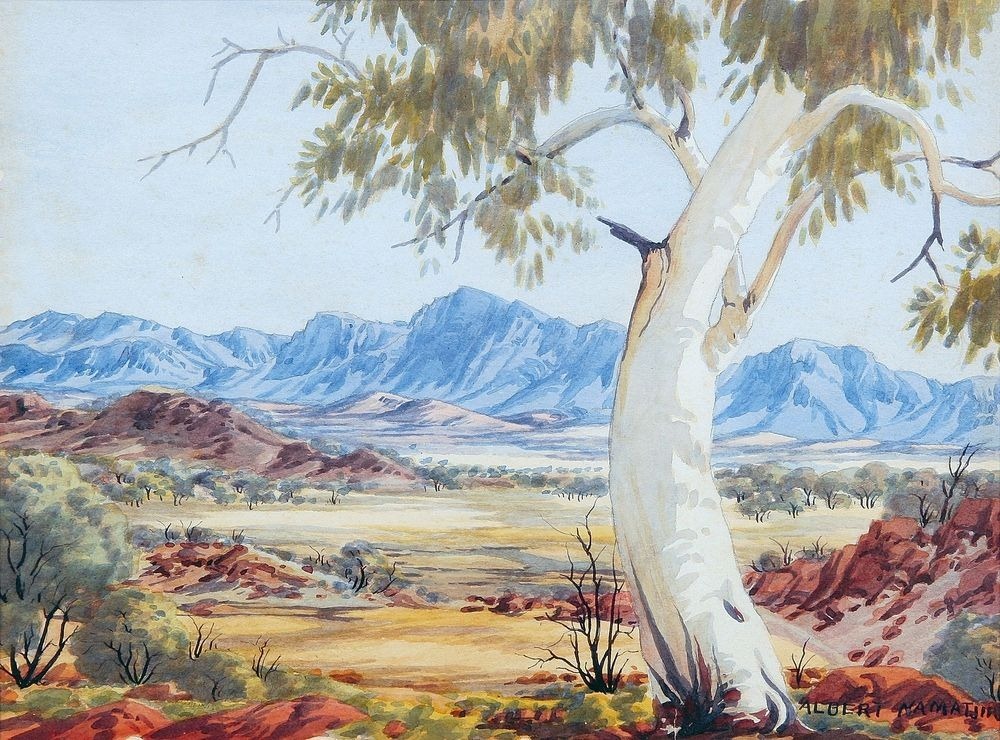 A painting by Albert Namatjira

2 thoughts on “Trees Made Famous by Movies, Music, Art and Literature”