How did gratitude evolve? Researchers are starting to trace this common human emotion all the way back to primate behavior.

“Thank you.” Two simple words, among the most repeated on a daily basis. When I travel to a foreign country, it is one of the first phrases I learn, just after “hello.” When children start making verbal requests, their parents quickly teach them to say “please” and “thank you.”

Plenty of research shows the benefit of saying thank you, as well as of other expressions of gratitude. Gratitude is one of the fundamentally important parts of human life, and comparative psychologists like myself are always interested in where these things come from, in the grand scheme of things. How did we as humans end up as a species for whom gratitude is as much a part of our social relationships as gossip?

It turns out this question is centuries old, with Darwin himself suggesting that humans and other animals share the “same emotions, even the more complex ones such as jealousy, suspicion, emulation, gratitude, and magnanimity.” And—at least for gratitude—some initial research by my colleagues and I suggests that Darwin might be right.

Searching for gratitude in primates

How do you systematically look for evidence of gratitude in species that can’t say “thank you”? Since you can’t ask them how they’re feeling, you observe behavior—and the behavior that we researchers believe reflects gratitude is called reciprocity.

Reciprocity is the exchange of goods and services between two individuals over time, often characterized as “you scratch my back and I’ll scratch yours.” This kind of mutual arrangement can be beneficial to both parties, making them more likely to survive.

Robert Trivers, who introduced the theory of reciprocal altruism in 1971, suggests that gratitude is the emotion that regulates our response to altruistic acts by others (and motivates our response in kind). As gratitude researcher Michael McCullough has explained, the positive feeling of gratitude can alert us to the benefits we’ve received from others and inspire us to show appreciation, which will in turn make others more likely to help us again in the future. In this way, gratitude helps build social bonds and friendships between individuals.

This means that reciprocity may have been fundamental in the evolution of gratitude. In humans, with our ability to express our emotions through language, reciprocity and expressions of gratitude often go together.

For example, researchers set up an experiment where half of the participants thought they received money from a partner, and the other half thought they received it by chance. In the next round of the study, the participants were given $10 and allowed to divide it up between themselves and the partner. Not surprisingly, individuals who thought their partner had given them money were more likely to distribute money back to their partners than those who had received it by chance. When asked why they donated money, they most often said, “to express appreciation.” In this experiment, the participants could not see or interact with their partners, so the only way to express their gratitude was by returning the favor. We may be seeing a very similar phenomenon in our primate relatives—they can’t express gratitude verbally, so returning favors may be the best way for them to do it.

A good deal of evidence suggests that some of our closest relatives, the other primates, engage in reciprocity in food sharing and other domains. For example, in one study we gave chimpanzees a task that required two chimpanzees to pull in a tray of food. It was set up so that the chimpanzees could come and go as they pleased, which meant that one chimpanzee was often sitting there waiting for a partner to arrive. We predicted that passing chimpanzees might just choose to help out their friends, or perhaps the chimpanzees that were the best at solving the task. Instead, the chimpanzees were more likely to help another chimpanzee in need of a partner if that chimpanzee had also helped them in the past. Reciprocity seemed more important than friendship and skill in their choices.

Unlike our closer chimpanzee relatives, capuchin monkeys and humans last shared an ancestor approximately 35 million years ago. This makes them great subjects to see just how far back we can trace the tendency to engage in reciprocity, particularly since they’re highly cooperative. In one task, we gave one capuchin monkey a choice between a prosocial option that rewarded themselves and a partner, and a selfish option that only rewarded the chooser. In this context, they were prosocial about 60 percent of the time. But when we gave them the opportunity for reciprocity, by alternating the roles of chooser and partner from task to task, they were significantly more prosocial, now nearly 75 percent of the time.

Even more compelling, we found that capuchins are highly attuned to whether a situation is reciprocal or not. In one variation, we didn’t actually let the second monkeys choose; we chose for them, but mimicked past choices that the second monkeys had made. The first monkeys moved back down to a similar level of prosocial behavior as when they were the only chooser, suggesting that they can clearly identify when another monkey has helped them and reward that monkey for doing so.

Finally, recent research suggests that capuchin monkeys and four-year-old children engage in upstream reciprocity, or “paying it forward,” in a remarkably similar fashion. In upstream reciprocity, receiving a favor makes individuals more likely to donate a favor to someone else in the future. In the case of the monkeys and children, after one individual donated a favor to another, that individual was taken out of the testing area and a new partner brought in. Surprisingly, both the capuchins and the children were more likely to donate a reward to the new partner, if they had recently received a reward themselves. They had no opportunity to repay the individual who had rewarded them before, but instead chose to pay their good fortunes forward. Some researchers have suggested that gratitude is the motivation behind paying it forward in humans, and this might also be the case in capuchin monkeys.

I would be remiss not to point out that although it entails high levels of prosocial behavior characteristic of gratitude, reciprocity itself doesn’t necessarily have to involve gratitude. It can occur as a transaction achieved by keeping track of benefits given and received and result in feelings of obligation or indebtedness rather than gratitude. However, there is good reason to believe that something else is going on with other primates.

First, if reciprocity were driven by indebtedness rather than gratitude, primates would have to be keeping track of costs and benefits over time. A lot of research has shown, though, that this level of calculation and memory is really not realistic for us or our primate relatives; in reality, these exchanges are more likely to be driven by emotional responses, which are easier to keep track of. Grateful emotions reinforce the relationship between two individuals, and individuals with close relationships are likely to provide favors for each other in the future, no questions asked.

Further, if you take away the ability to ask people why they are helping, experiments of gratitude in humans look very much like experiments of reciprocity in other species. What is measured is the propensity to return favors, with gratitude as the motivational mechanism proposed that drives that behavior. When the similarities are this great, it becomes difficult to argue that what we see in nonhuman primates is fundamentally different from what we see in humans. We may not be able to ask primates to fill out a survey, but the similarities in how they act are compelling.

A number of questions could still be answered to make a stronger case that nonhuman primates really do feel gratitude, or some evolutionary building block of gratitude.

First, a great deal of evidence in humans suggests that gratitude is important for forming new relationships, but not so much for maintaining existing ones. If the opportunity arose to study a newly formed group of primates over the long term, we would expect to see reciprocity diminish over time.

Along the same lines, we should also expect to see more reciprocity among non-kin than kin. Since helping your family also increases your genetic contribution to the next generation, reciprocity is not really necessary for motivating that kind of helping behavior.

Finally, all of the research to date uses repayment of favors as the purported way to acknowledge a past favor done. While this is likely the best, most observable measure we have, it is quite different from a verbal thank you given from one human to another. There may be a subtle expression, gesture, or some other communication that other species use to acknowledge kind acts. The trick will be for us to develop a deep enough understanding of other species’ communication systems to discover it.

The GGSC’s coverage of gratitude is sponsored by the John Templeton Foundation as part of our Expanding Gratitude project.

We’ve come a long way since Darwin first proposed that gratitude may be a universally experienced emotion. Although we are not yet at the point where we can “speak chimp” well enough to understand their expressions of gratitude, the behavior of our closest relatives certainly suggests that we humans are not alone in the importance we place on gratitude. The research suggests that, in all likelihood, our propensity for gratitude really does have deep evolutionary roots, and it will be up to us to find out how deep they go.

We often blame our worst tendencies, like aggression and competition, on our evolutionary history. It’s important to remember that some of our most positive qualities like empathy and gratitude are also a part of this history. When we discover these traits in our closest relatives, it’s a powerful reminder that the “good” in human nature is deeply rooted, as well.

(This article is originally appeared on Greater Good, the online magazine of the Greater Good Science Center (GGSC). Based at UC Berkeley, the GGSC studies the psychology, sociology, and neuroscience of well-being, and teaches skills that foster a thriving, resilient, and compassionate society. Malini Suchak is an assistant professor of animal behavior, ecology, and conservation at Canisius College. Her research on gratitude was supported through the GGSC’s Expanding the Science and Practice of Gratitude project.)

9 thoughts on “The Evolution of Gratitude” 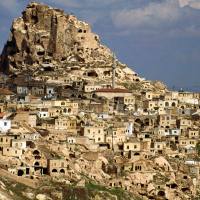