Fleet of more than one hundred transporters has altogether travelled a distance equal to the distance between the Earth and Sun. Photo credit

One of the biggest civilian development project that Libya’s ex-president Muammar Gaddafi undertook during his forty-two-year rule was the Great Man-Made River. Gaddafi’s dream was to provide fresh water for everyone, and to turn the desert green, making Libya self-sufficient in food production. To make this dream a reality, Gaddafi commissioned a massive engineering project consisting of a network of underground pipes that would bring fresh water from ancient underground aquifers deep in the Sahara to the drought suffering Libyan cities. Gaddafi called it the “Eighth Wonder of the World”. The western media rarely mentioned it, and whenever it did, it was dismissed as a “vanity project” calling it “Gaddafi’s Pet Project” and “the pipe dream of a mad dog”. But truth is, the Great Man-Made River Project is a fantastic water delivery system that has changed lives of Libyans all across the country.

Libya is one of the sunniest and driest countries in the world. There are places where decades may pass without seeing any rainfall at all, and even in the highlands rainfall seldom happens, like once every 5 to 10 years. Less than 5% of the country receives enough rainfall for settled agriculture. Much of Libya’s water supply used to come from desalination plants on the coast, which were expensive and therefore used only for domestic purposes. Little was left for irrigating the land.

In 1953, while searching for new oilfields in southern Libya, vast quantities of ancient water aquifers were discovered. The exploration team discovered four huge basins with estimated capacities of each ranging between 4,800 and 20,000 cubic km. Most of this water was collected between 38,000 and 14,000 years ago, before the end of the last ice age, when the Saharan region enjoyed a temperate climate.

After Gaddafi and the Free Unitary Officers seized power in a bloodless coup in 1969, the new government immediately nationalized the oil companies and started using the revenues from oil to set up hundreds of bore wells to bring fresh water from the desert aquifers. Initially, Gaddafi planned to set up large-scale agricultural projects in the desert where the water was found, but when the people displayed reluctance to move, he conceived a plan to bring the water to the people instead.

In August 1984, Muammar Gaddafi laid the foundation stone for the pipe production plant at Brega, and the Great Man-Made River Project began. Around 1,300 wells were dug into the desert soil, some up to 500 meters deep, to pump water from the subterranean water reserve. The pumped water is then distributed to 6.5 million people living in the cities of Tripoli, Benghazi, Sirte and elsewhere through a network of underground pipes 2,800 km long. When the fifth and final phase of the project is complete, the network will have 4,000 km length of pipes that will enable 155,000 hectares of land to be cultivated. Even with the last two phases yet to complete, the Great Man-Made River is the world’s largest irrigation project.

The pipeline first reached Tripoli in 1996, at the completion of the first phase of the project. Adam Kuwairi, a senior figure in the Great Man-Made River Authority (GMRA), vividly remembers the impact the fresh water had on him and his family.

“The water changed lives. For the first time in our history, there was water in the tap for washing, shaving and showering,” he told BBC. “The quality of life is better now, and it’s impacting on the whole country.”

The project was so well recognized internationally that in 1999, UNESCO accepted Libya’s offer to fund the Great Man-Made River International Water Prize, an award that rewards remarkable scientific research work on water usage in arid areas. 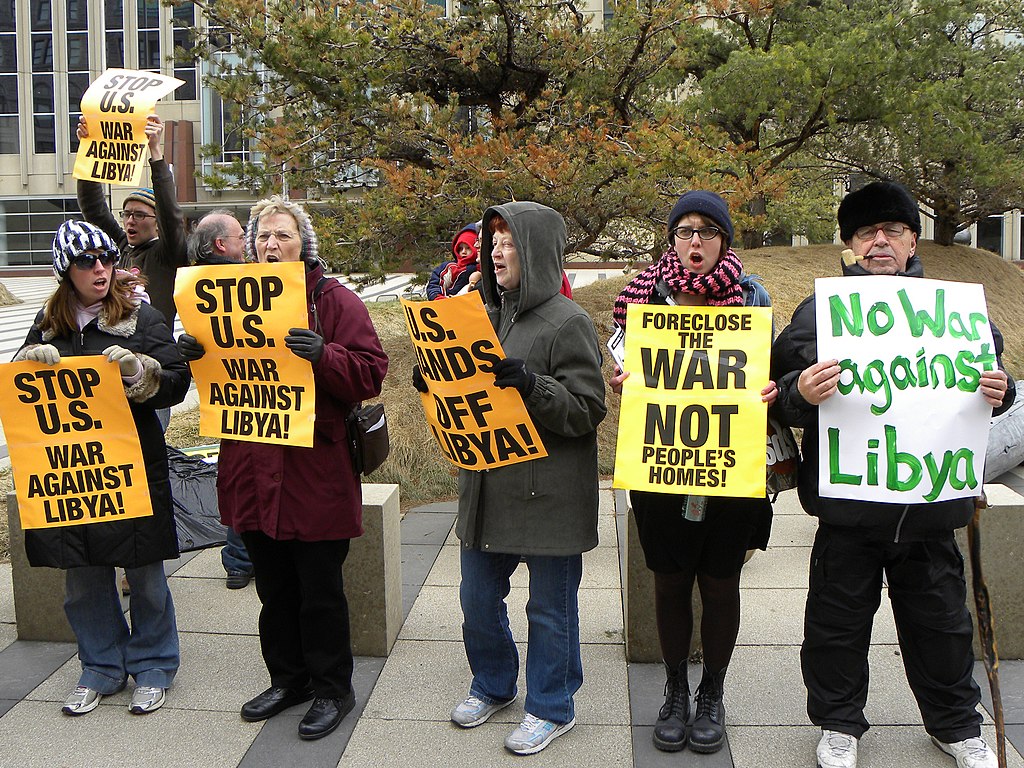 US citizens protesting against US military action in Libya in Minneapolis, on March 21, 2011. Photo credit

In July 2011, NATO bombed the Great Man-Made River water supply pipeline near Brega including a factory that produces the pipes, claiming that the factory was used as “a military storage facility” and that “rockets were launched from there”. NATO’s attack on the pipeline disrupted water supply for 70% of the population who depended on the piped supply for personal use and for irrigation. The country now reeling under civil war, the future of the Great Man-Made River Project is in jeopardy.

Back in 1991, at the opening of the first phase of the project, Muammar Gaddafi had prophetically said about the largest civil engineering venture in the world:

2 thoughts on “The Great Man-Made River of Libya”