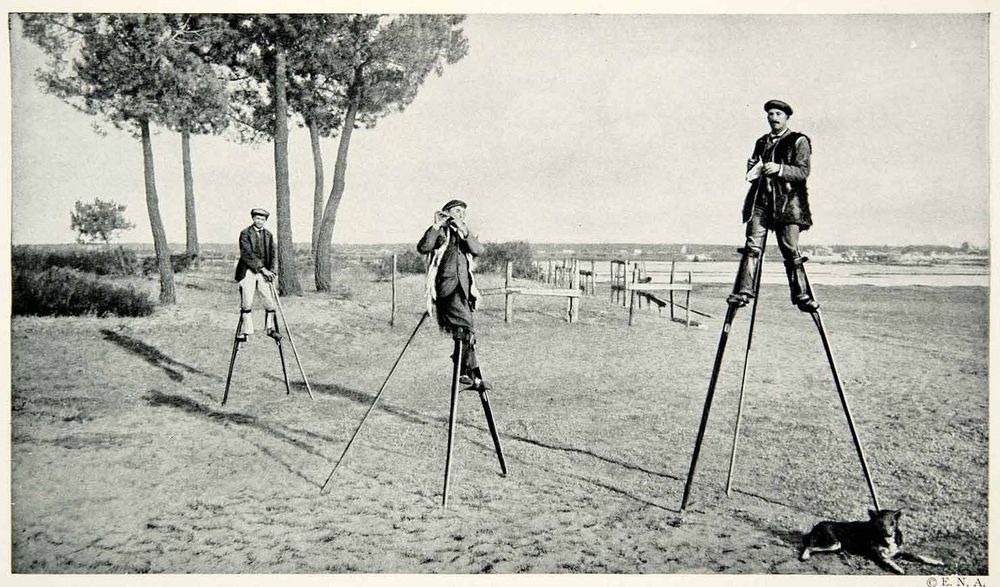 A 1938 postcard showing shepherds from the marshy region of Landes, France, getting around on stilts.

The Landes region of southwestern France, bordering the Bay of Biscay, is covered by a large pine forest. In fact, it’s the largest ‘maritime pine’ forest in Europe—’maritime pine’ is a species native to the Mediterranean region. But a hundred years ago, the landscape looked very different. Instead of forests, there was a great level of plain that stretched from horizon to horizon. This plain was covered with stunted bushes and dry heath that were periodically burned off by the local population to create grazing land for sheep. Around the middle of the 19th century, there were an estimated one million sheep in this area. 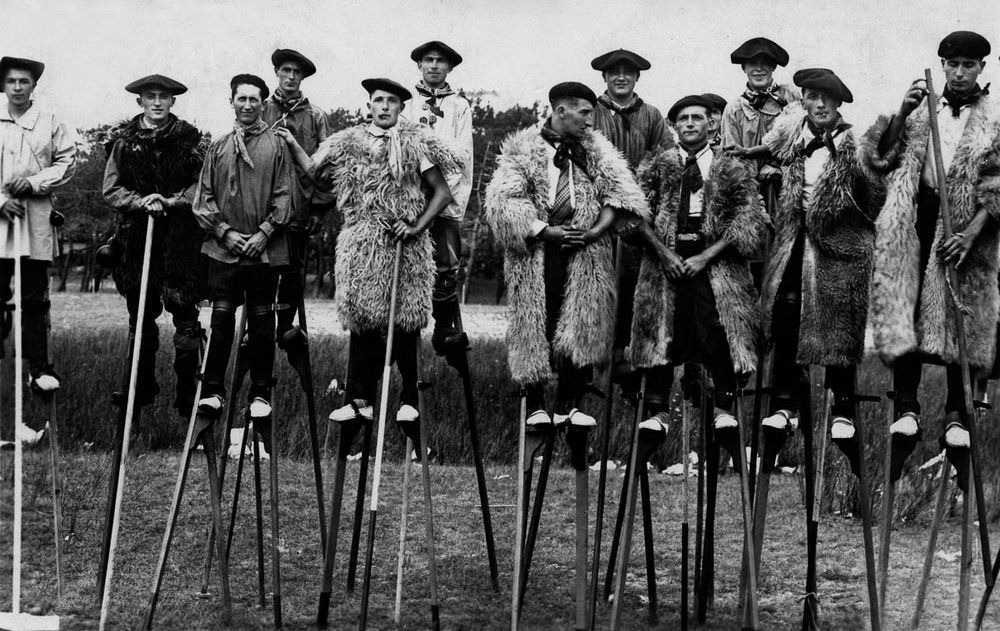 Shepherds of Landes with their distinctive sheepskin coats, circa 1936.

The sheep were managed by shepherds who moved around on long stilts. Using stilts had several advantages. It extended their field of vision allowing them to survey distant flocks of sheep. Tall stilts also increased their stride allowing them to cover long distances in less time. Most importantly, it allowed them to traverse the soft, marshy ground that the plains became after the slightest rainfall. As a matter of fact, practically the entire population of Landes walked on slits to avoid the soggy ground during rainy days. This system of locomotion was so effective that men on stilts could keep up with horses at full trot. 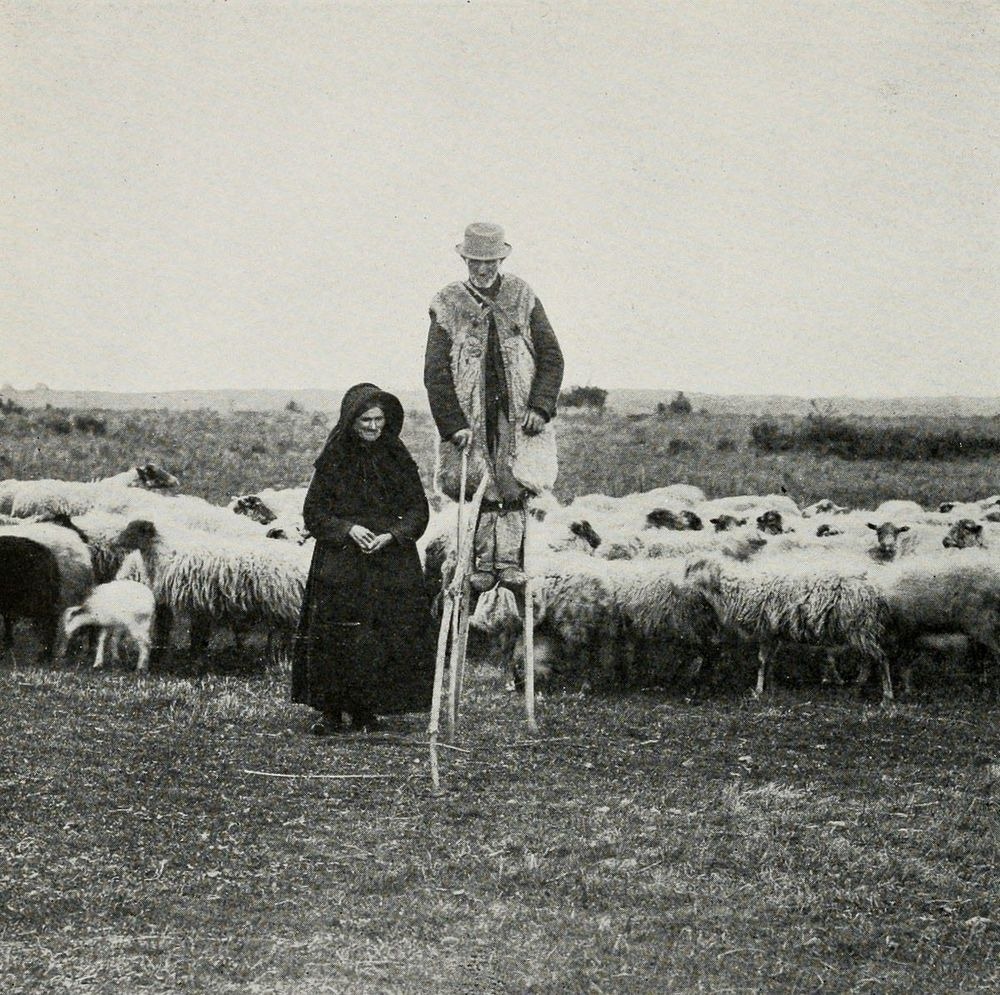 The locals called this unique mode of transportation tchangues, which means “big legs”. The stilts made of wood are about five feet high and are provided with a shoulder and strap to support the foot. The upper part of the wood is flattened and rests against the leg, where it is held by a strong strap. The lower part which rests upon the earth is enlarged and is sometimes strengthened with a sheep’s bone. The shepherd carries a staff which he uses as a point of support for getting on to the stilts, and also as a crook for directing his flocks. The stilt is so stable and comfortable that the shepherd, perched upon the high seat, would often knit to pass his time. Habituated from their childhood by this sort of exercise many shepherds developed extraordinary skills of acrobatism and maneuverability. They can pick up a pebble from the ground, pluck a flower, simulate a fall and quickly recover, run on one foot, and so on. 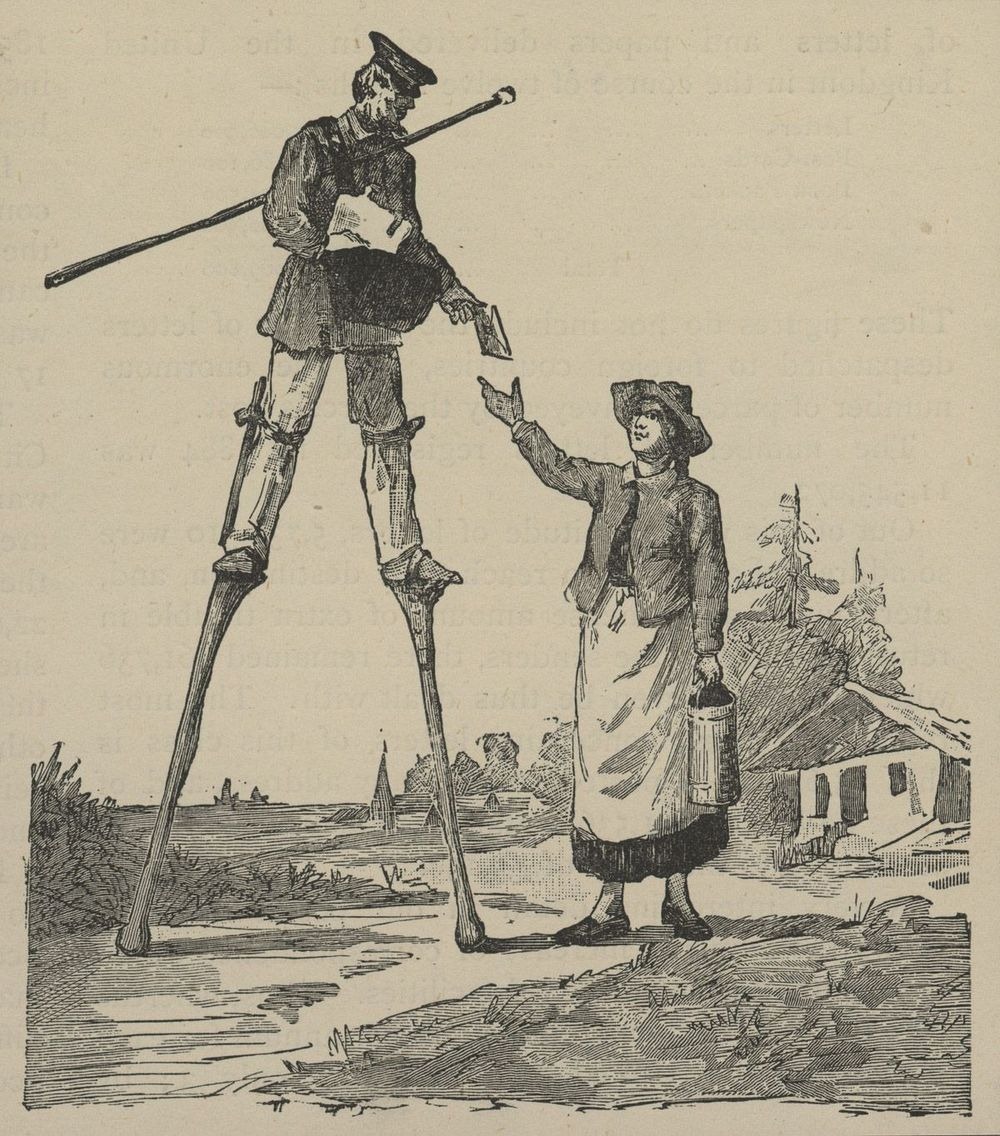 An illustration of a mid-19th century Landes postman, circa 1850.

In 1808, when the Empress Josephine went to Bayonne to meet Napoleon I, the municipality sent an escort of young Landese stilt walkers to accompany and amuse the ladies of the court. The ladies took delight in making the stilt walkers race, or threw coins upon the ground and watched them scramble sometimes resulting in falls. Stilt races were also an essential part of any merry-makings in the villages of Gascony. The young people vied with each other in speed and agility, and even the young girls, who were as skillful with stilts as the men, took part in the contests. 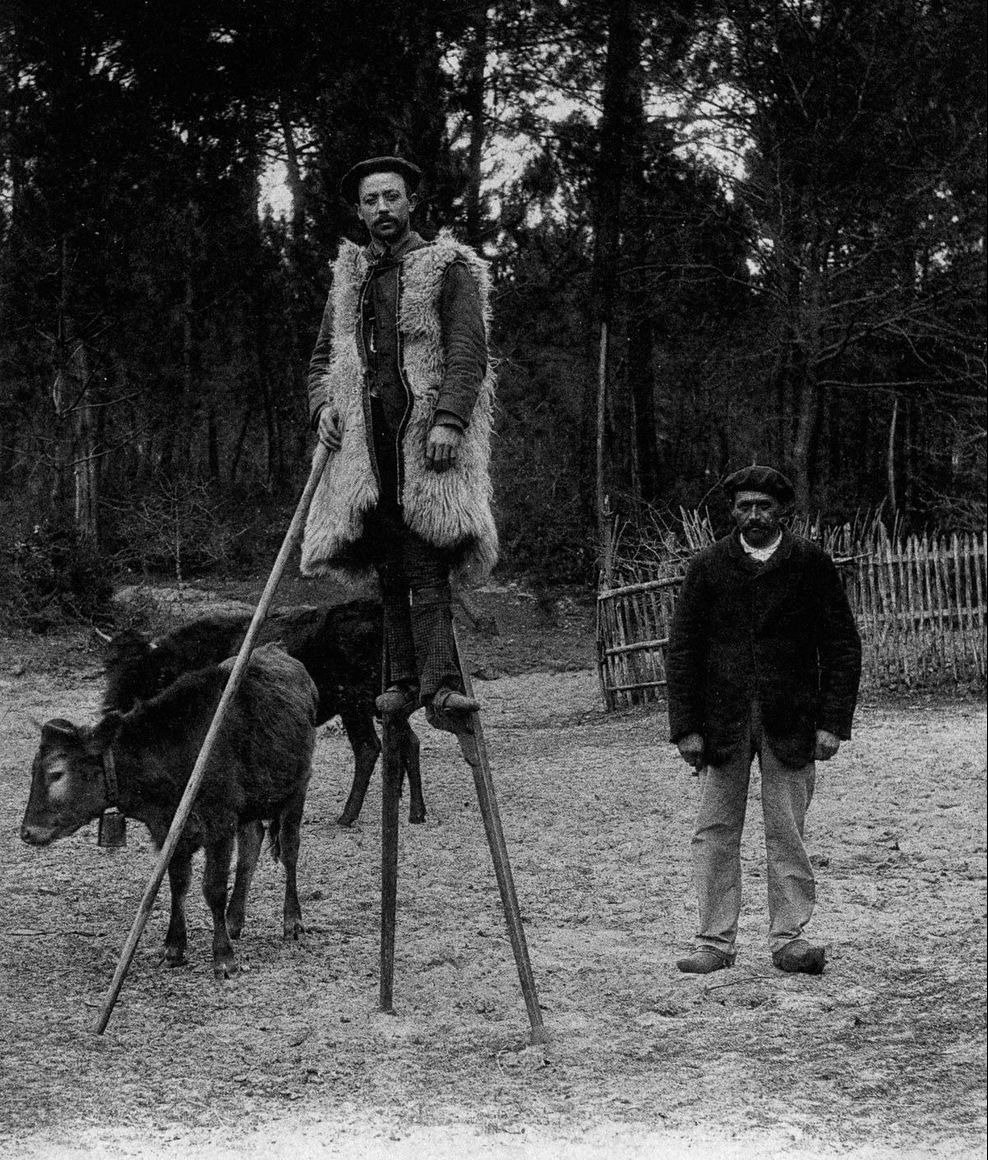 A notable demonstration of silt walking was made by Sylvain Dornon in 1891 when he walked from Paris to Moscow —a distance of more than 2,800 km— on stilts in just 58 days.

Stilt walking gradually died out in the Landes starting from the middle of the 19th century with the systematic development of large pine plantations that transformed the landscape and the local economy. The disappearance of the moors, because of the expansion of the pine plantations, brought about the end of sheep herding, and with it the iconic image of shepherds on stilts disappeared as well. 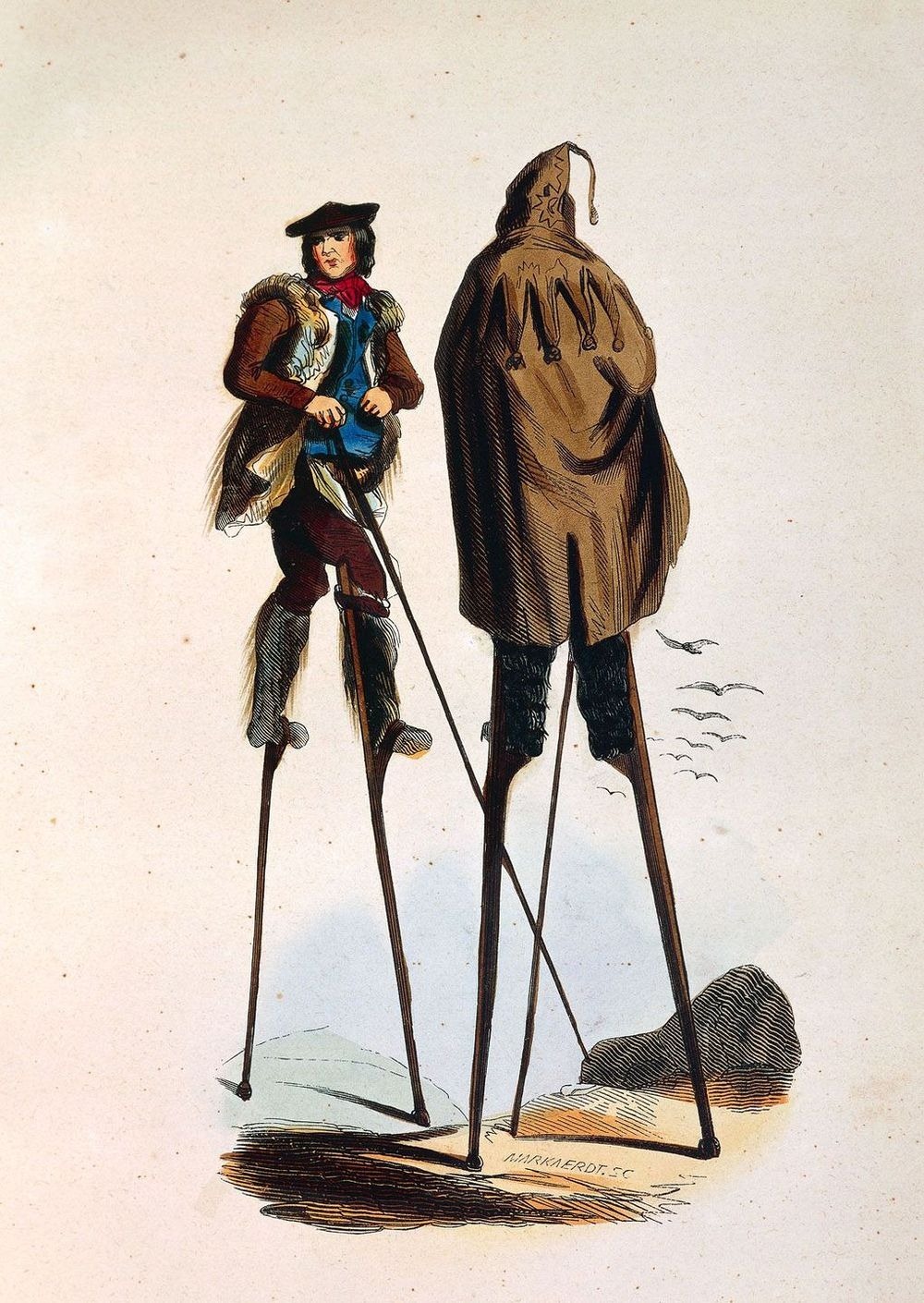 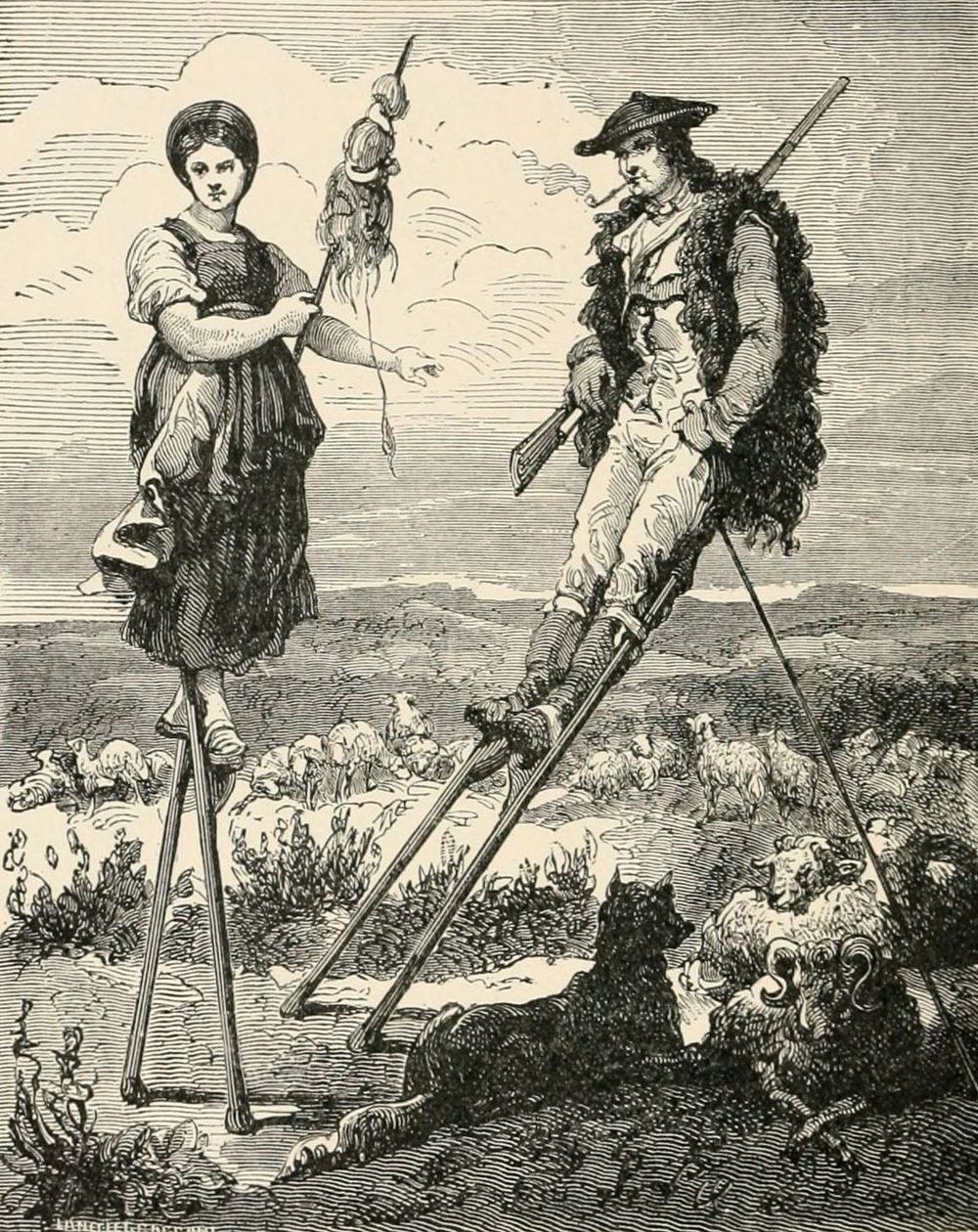 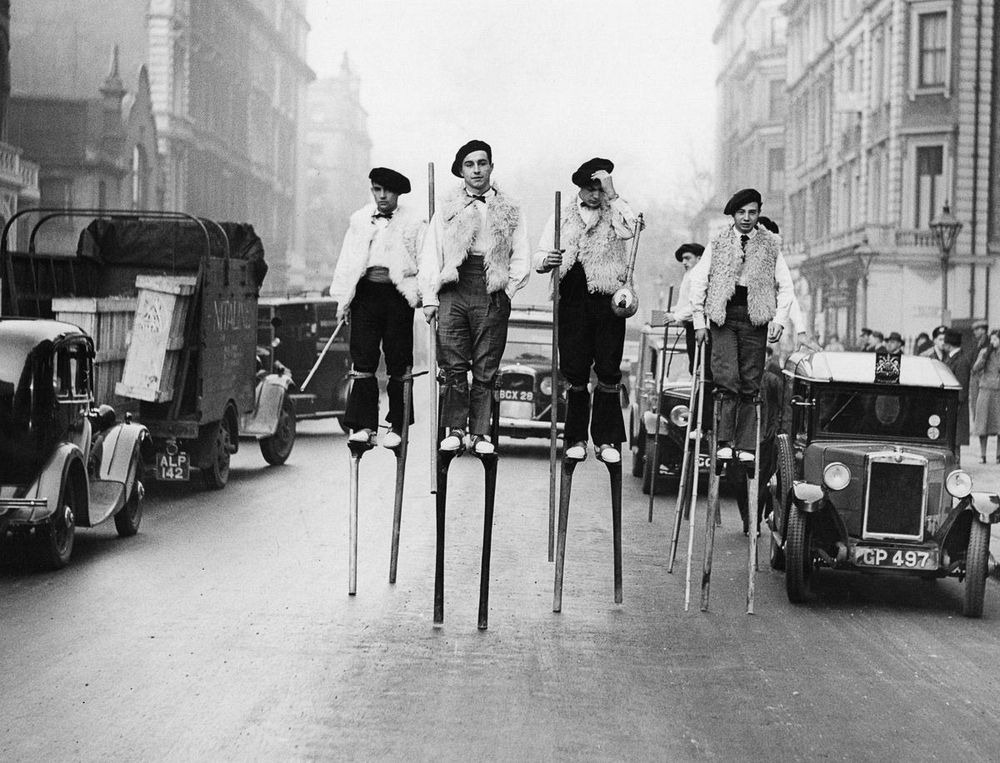 Stilt dancers from Landes walk through London on their way to a performance at the Albert Hall. Jan. 9, 1937

16 thoughts on “The Stilt Walking Shepherds of Landes”