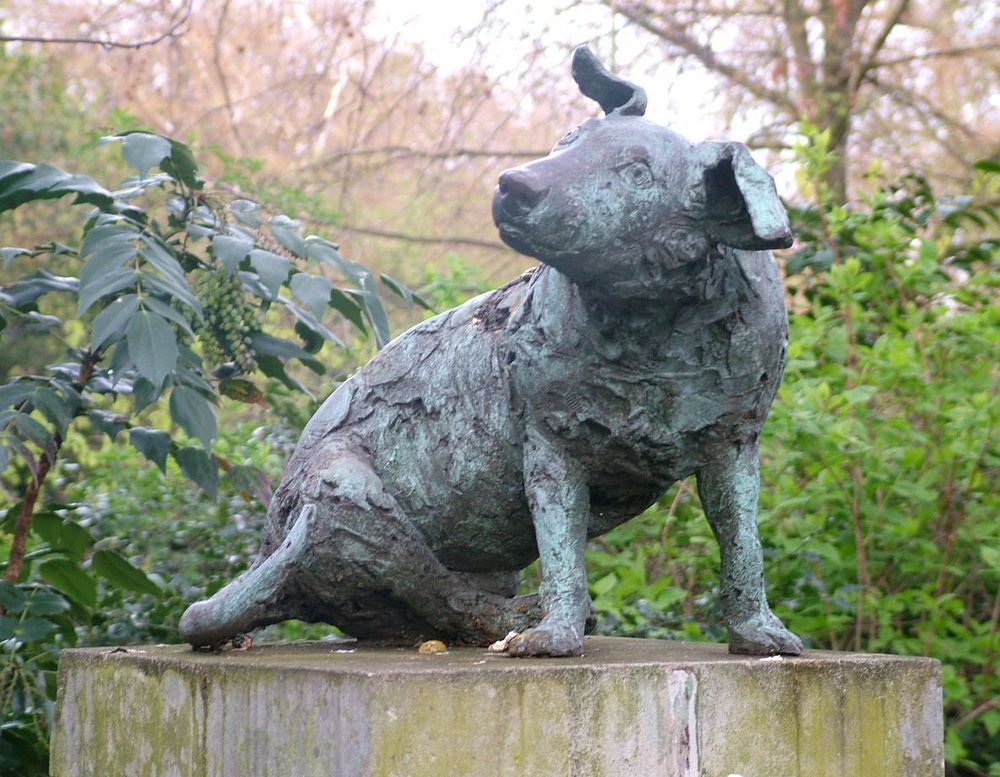 In a secluded spot near the Old English Garden, in London’s Battersea Park, is a small bronze statue of a terrier. The statue was erected in 1985, but the one that it replaced — the original statue — was the subject of much political and scientific contention, resulting in riots and demonstrations that raged for seven years and divided the entire nation.

The controversy began in December 1902, when an anonymous brown dog was subjected, over the course of several months, to repeated live surgeries in a laboratory of University College London. The dog was cut open, allegedly without anesthesia, and his pancreas removed, and for the next two months, confined to a cage where it howled and whined upsetting several staff of the college. 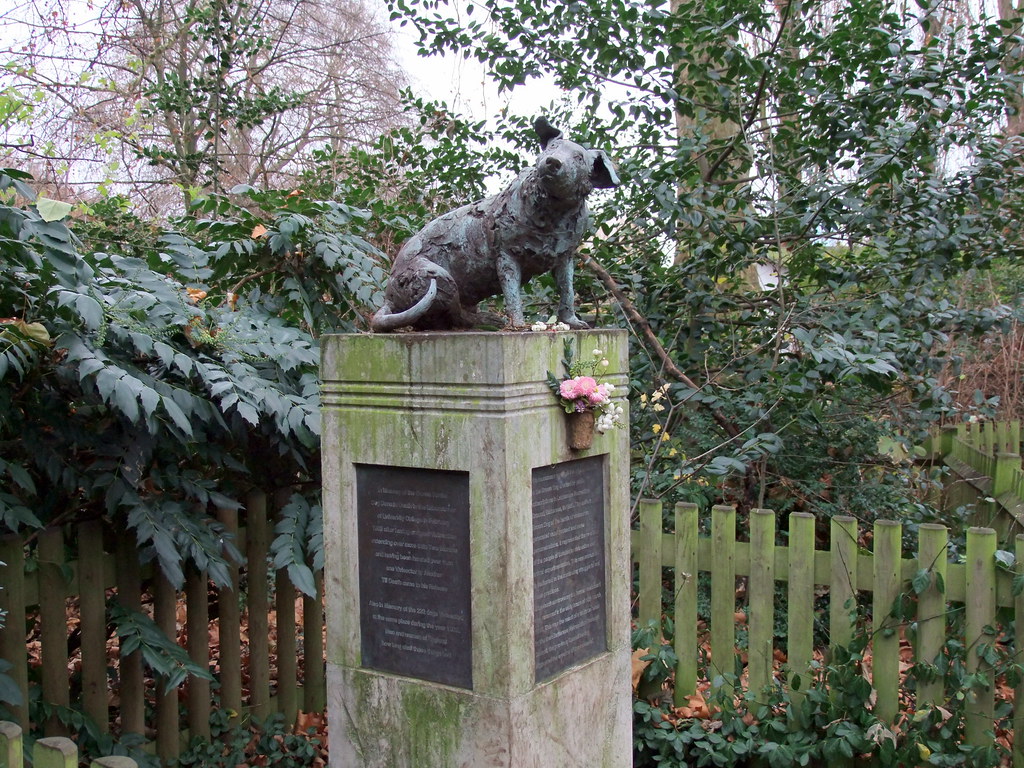 The final act was performed in February 1903 in a lecture room before a group of medical students. The dog was stretched on his back on the operating table, and was cut open to inspect the result of the first operation. The wound was then clamped shut with forceps and the animal handed over to another researcher who punctured a new wound in the neck of the animal. The exposed nerves on the neck were then stimulated with electricity in an attempt to prove that salivary pressure was independent of blood pressure. After half an hour of trying, the experiment was deemed a failure and abandoned.

The terrier was then handed to a student who ended the miserable dog’s sufferings by driving a knife to his heart.

In attendance that day were two Swedish women and anti-vivisectionists who had enrolled themselves as students in order to document such incidents. The same year, the women published a book titled The Shambles of Science: Extracts from the Diary of Two Students of Physiology, where they exposed the researchers’ cruel methods.

The book came to the attention of Stephen Coleridge, secretary of the National Anti-Vivisection Society, who realized that two anti-cruelty laws had been broken in the animal’s handling — he had not been anesthetized, and he had been used in more than one experiment. When Coleridge publicly lashed out against the scientists, William Bayliss, one of the professors involved in the vivisection of the dog, sued Coleridge for libel. 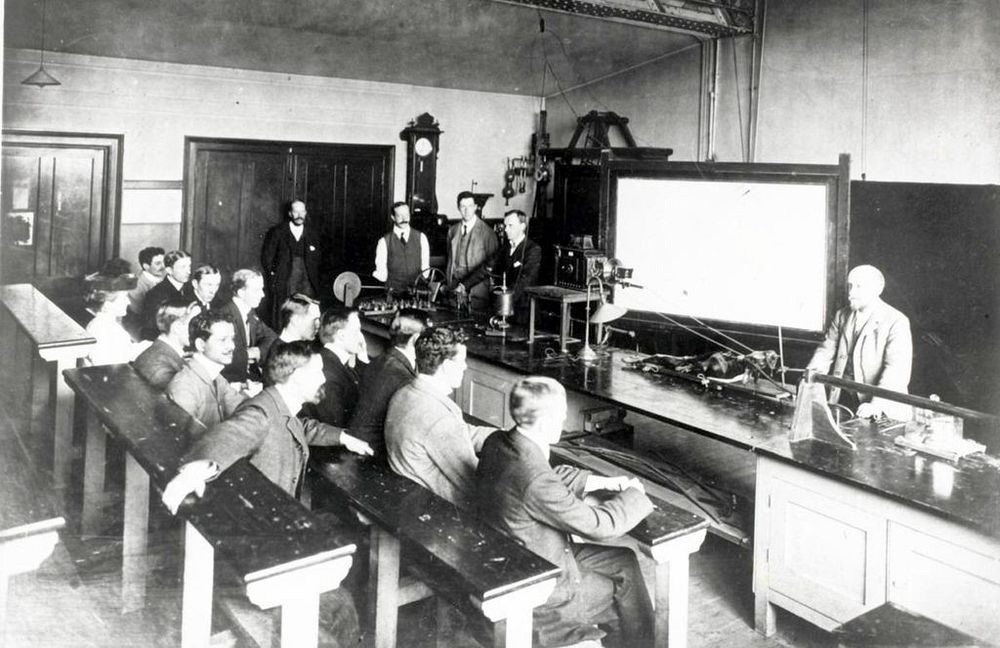 Reconstruction of the 1903 vivisection demonstration by William Bayliss shown in the court during the November 1903 trial in London. William Bayliss is standing behind a dog on an operating board, and to his right, Ernest Starling, along with other technicians. Photo credit: University College London archives

Although Coleridge lost the suit, the publicity surrounding the trial brought the ‘Brown Dog Affair’ vividly to the public’s attention.

In 1906, a benefactor provided the funds to erect a memorial statue in Battersea’s Latchmere Recreation Ground, not far from where the current statue stands. The statue depicted a dog sitting upright on top of a cylindrical drinking fountain, which had separate drinking troughs for both humans and animals. The statue bore a plaque that said:

“In Memory of the Brown Terrier Dog Done to Death in the Laboratories of University College in February 1903 after having endured Vivisection extending over more than Two Months and having been handed over from one Vivisector to Another Till Death came to his Release.

Also in Memory of the 232 dogs Vivisected at the same place during the year 1902.

Men and Women of England how long shall these Things be?”

Medical students in London were angered by the plaque, because of the accusatory nature of the inscription. They repeatedly attacked the memorial and protested against it. In November and December, 1907, thousands of medical students rioted in the streets, burnt effigies, and made more attempts at attacking the statue requiring the city to use police force to control the crowd. Many students were arrested and fined, and round-the-clock guards were placed to protect the statue. Eventually the council got tired of the controversy and the need for policing the memorial which was costing the city too much. On March 10, 1910, the statue was quietly removed under the cover of darkness. 3,000 anti-vivisectionists protested in Trafalgar Square and demanded that the statue be returned but to no avail.

Seventy five years later, the National Anti-Vivisection Society and the British Union for the Abolition of Vivisection commissioned a new statue and placed it in Battersea Park. It bears the same inscription as the original, although there is no drinking fountain this time. 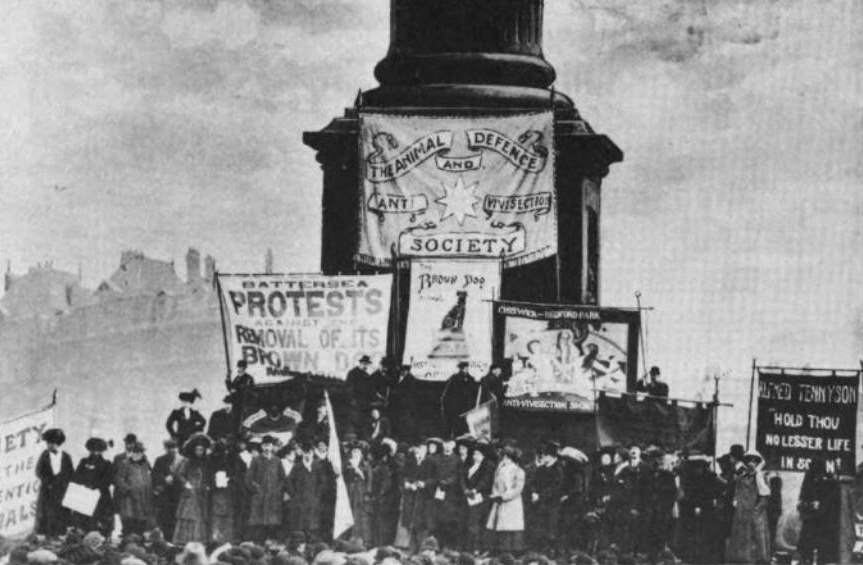 A demonstration on 19 March 1910 in Trafalgar Square to protest the statue’s removal.

3 thoughts on “The Brown Dog Affair”